New paper: A toolkit for understanding and addressing climate scepticism

Posted on 2 December 2022 by BaerbelW

This is a quick summary about the newly published paper “A toolkit for understanding and addressing climate scepticism” by Matthew J. Hornsey and Stephan Lewandowsky. It leverages a thread tweeted by Stephan Lewandowsky shortly after publication as well as a mention in Doug Bostrom’s and Marc Kodack’s New Research Week #47

Despite over 50 years of messaging about the reality of human-caused climate change, substantial portions of the population remain sceptical. Furthermore, many sceptics remain unmoved by standard science communication strategies, such as myth busting and evidence building. To understand this, we examine psychological and structural reasons why climate change misinformation is prevalent. First, we review research on motivated reasoning: how interpretations of climate science are shaped by vested interests and ideologies. Second, we examine climate scepticism as a form of political followership. Third, we examine infrastructures of disinformation: the funding, lobbying and political operatives that lend climate scepticism its power. Guiding this Review are two principles: (1) to understand scepticism, one must account for the interplay between individual psychologies and structural forces; and (2) global data are required to understand this global problem. In the spirit of optimism, we finish by describing six strategies for reducing the destructive influence of climate scepticism.

The authors structured the article around the interplay between individual-level factors, such as personal circumstances or worldviews, and “collective-level” drivers of (organized) climate denial through the usual “think tanks” and so on. 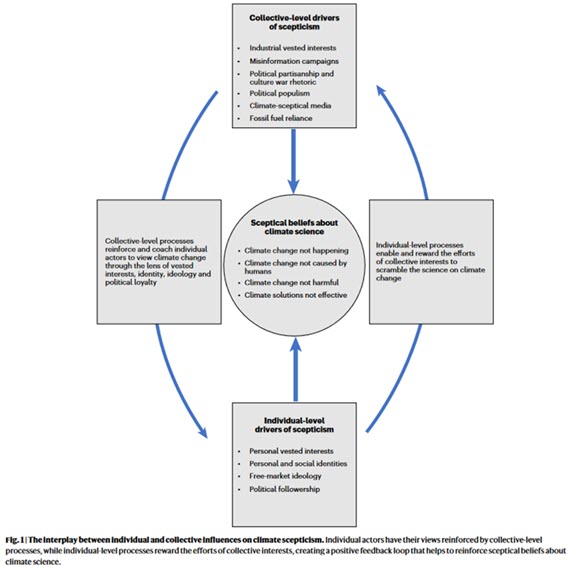 This paralleled the structure of other recent reviews, including Lewandowsky (2021) from last year in the Annual Review of Public Health. What is new in this latest article is that Hornsey and Lewandowsky shift focus away from North America and take a closer look at global data and organized climate denial in Europe. So for example, here are some global data of how much people feel threatened by climate change: 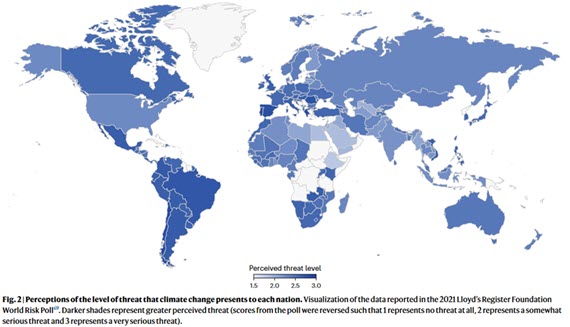 What’s interesting about organized climate “skepticism” in Europe (and especially in Germany) is that given high public acceptance of science, the denial machine is more of a delay machine. Delaying and dismissal of renewable alternatives are the main priority.

So what can we do about all that? The authors review six possible strategies:

Will this make a difference? That remains to be seen, but we have been waiting for (too) many decades already, as the authors clarify in their conclusions:

“The first scientific article to draw connections between fossil fuel combustion and climate change dates back more than 120 years and it has been over 30 years since George Bush Senior said: ‘Those who think we are powerless to do anything about the greenhouse effect forget about the “White House effect”; as President, I intend to do something about it.’ However, neither scientific knowledge nor political rhetoric has thus far resulted in global commitments that are sufficient to address the climate crisis.”

Hornsey & Lewandowsky (2022) produce a comprehensive snapshot of modes of cognitive failure (accidental and inflicted) affecting our halting progress toward solving our climate blunder. The authors don’t stop there, but also offer a collection of “interventions for reducing damage,” tools given sharp edges by research. There’s a hard lesson embedded therein for the climate communications community, one that ought to be intutively obvious: barging into a community with a lot of extraneous political baggage irrelevant to immediate purpose proudly on display is counterproductive, destructive to progress. Any of us with a cranky uncle knows: a single trigger word can end rational behavior. The authors put it more tactfully: “sceptics will be more influenced by messengers that share salient identities with them: rural people will be more influenced by rural messengers, conservatives will be more influenced by conservatives, and so forth. This is a challenging message for many climate activists because it underscores how their identification as green or left can be enough to render their voices impotent when it comes to influencing sceptics.” [bold ours]  As a review article A toolkit for understanding and addressing climate scepticism is a fast and complete spin-up for people new to this game, and very probably a worthwhle refresher for old hands.