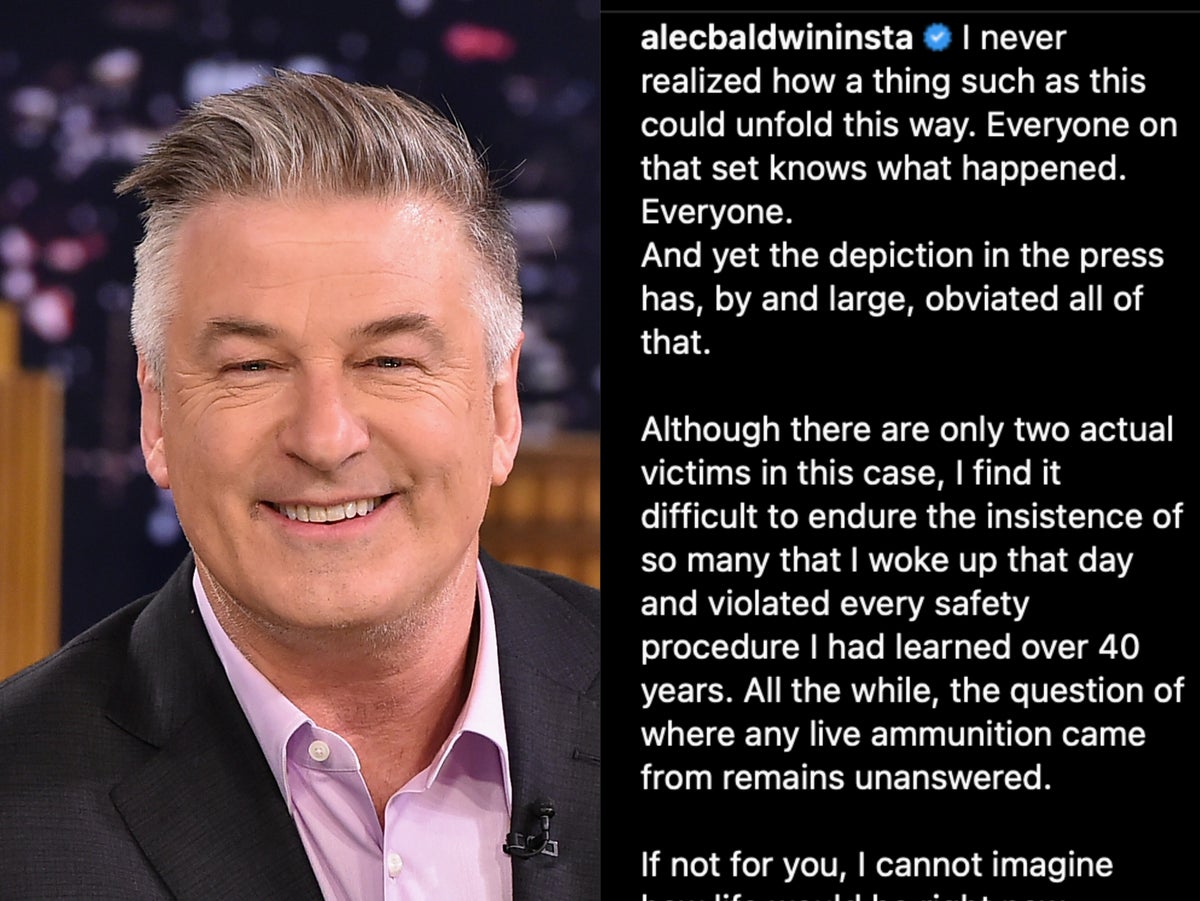 Alec Baldwin has blamed the media for making the aftermath of the set shooting that killed Halyna Hutchins more “difficult”.

The 64-year-old actor fatally shot Hutchins and wounded director Joel Souza on the Rust set on 21 October, after assistant director David Halls allegedly handed him a prop gun that turned out to be loaded with live ammunition.

Baldwin denies responsibility for the shooting, and recently said that claims he knew the gun was loaded have ‘taken years off my life”.

The actor’s wife, Hilaria, shared an Instagram post capioned: “I am not going anywhere. Take all the time to be sad. I am here.” In the comments underneath, Baldwin hit out at the media’s coverage of the incident.

“I never realised how a thing such as this could unfold this way. Everyone on that set knows what happened. Everyone. And yet the depiction in the press has, by and large, obviated all of that.

“Although there are only two actual victims in this case, I find it difficult to endure the insistence of so many that I woke up that day and violated every safety procedure I had learned over 40 years. All the while, the question of where any live ammunition came from remains unanswered.”

Addressing Hilaria, he said: “If not for you, I cannot imagine how life would be right now.”

Hilaria responded to Baldwin’s comment, writing: “The sadness I see you carry around daily breaks my heart.”

She continued: “People making money and getting attention at other people’s expense. A cruelty I would never have completely believed before this life with you. It’s an inhumane and dangerous use of the important and sacred power journalists should have…if only they could for one minute put themselves in the shoes of all the people who were at this tragedy. If their hearts could grow and embrace all of you with empathy.”

Hilaria went on: “Halyna is tragically gone and those who love her are forever broken, Joel will carry scars on his body and memory, you…replaying it day and night..the sounds, sights, and physical, haunting your waking and sleeping hours. For those gawking and gossiping, for one minute imagine themselves forever changed due to an error, incompetence, or malice. And then to double down on and poke at the inevitable torture that the trauma alone has scarred.

“I don’t know why and how this happened, but we desperately want an answer. I just wish that in the meantime, I could protect you from more cruelty. We cannot force these people, but we can be a mighty support system…all of the people who are reading this and all of us who love you so. We see you and we hold you. You are safe with us, Alec.”

While New Mexico’s Office of Medical Investigator officially ruled the shooting was an accident, Baldwin has blamed Hannah Gutierrez-Reed, who served as the armorer on the film, and assistant director Dave Halls, who handed him the weapon.