All the closed routes and partial rail services this week 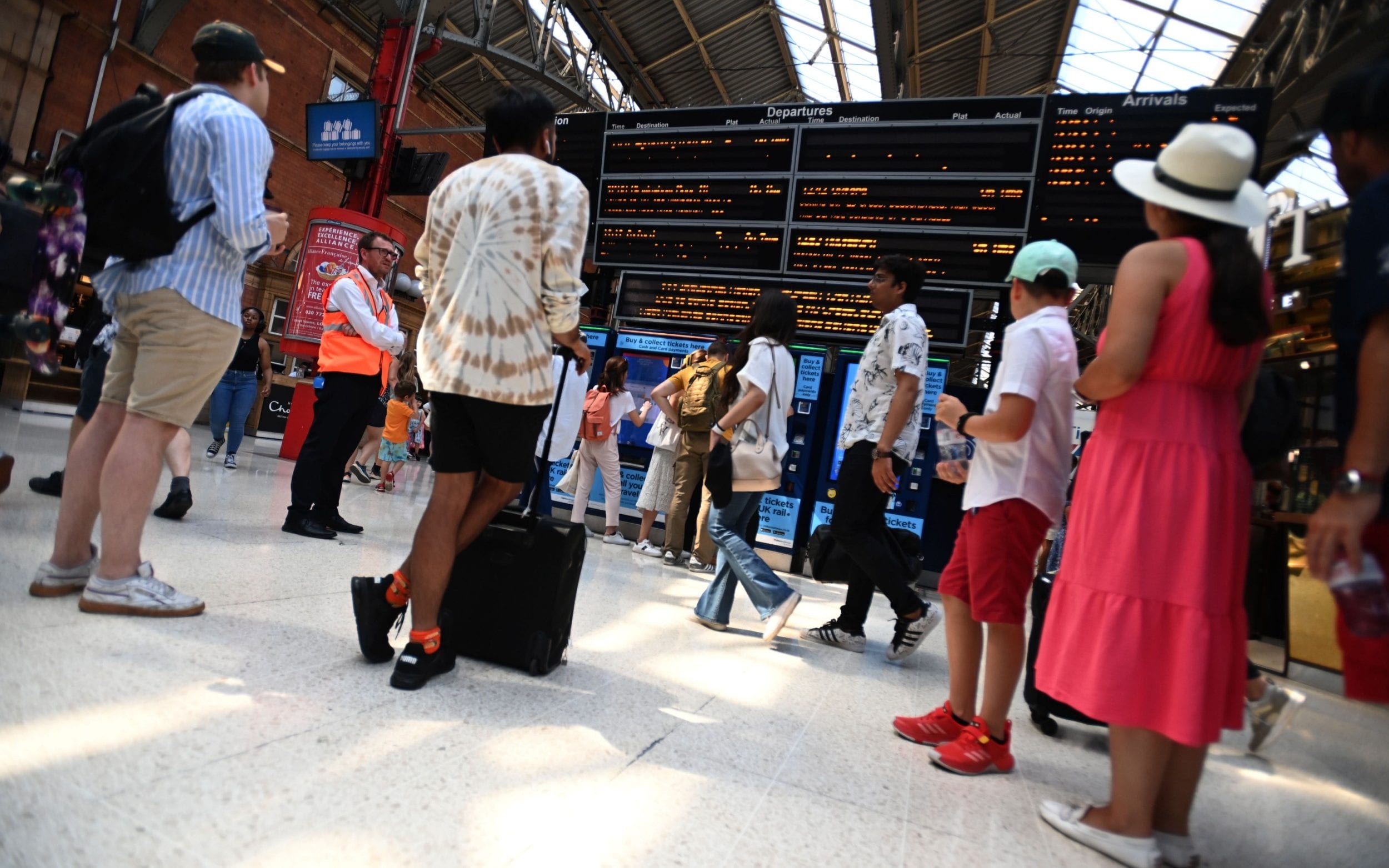 Commuters are braced for rail chaos this week as the Rail, Maritime and Transport Workers union (RMT) and ticketing union TSSA walk out on coordinated train strikes, bringing Britain’s rail and metro networks to a shuddering halt.

Major transport links are expected to be extremely disrupted on the main strike days of Thursday, August 18 (today) and Saturday, August 20, while a Tube strike will hit the London Underground on Friday, August 19.

Most rail operators are also warning passengers to avoid travelling on strike days and to plan ahead on Friday 19 and Sunday 21 as disruption continues. Londoners can expect further disruption amid walkouts on TfL services on Friday.

Here’s the latest timetable information from operators about the RMT and TSSA strikes.

Which trains are operating on rail strike days?

Avanti West Coast is advising customers to travel only if absolutely necessary on Thursday 18 August or Saturday 20 August.

During the industrial action on August 18 and 20, the company will run one train per hour from Euston to Manchester, Liverpool, Birmingham, Preston, with a limited service on to Glasgow. The first train will depart before 8am and the last mid-afternoon.

North Wales, Shrewsbury, Blackpool and Edinburgh will have no services. Stockport, Macclesfield, Stoke-on-Trent and Runcorn stations will be closed.

On the c2c route, a reduced service will be running from 7:30am until 6:30pm on strike days, around a third of normal service. Two trains per hour will run from Fenchurch Street to Shoeburyness and to Pitsea via Rainham. No trains will run via Ockendon or Chafford Hundred.

On Friday 19 and Sunday 21 August,a full service is due to resume from 8am, although passengers should be prepared for knock-on disruption.

Although Caledonian Sleeper staff are not on strike, all services on from Wednesday 17 through to Friday 19 August have been cancelled.

Chiltern are advising customers they will be running an extremely limited service, without a replacement bus service.

On Thursday 18, only one train per hour will run from London Marylebone to Oxford Parkway, Banbury, Aylesbury and between Aylesbury Vale Parkway and Amersham respectively.

The service will run between 8am and 5pm, with no trains running north of Banbury.

On Friday 19, no Chiltern Railways trains will operate on the route Marylebone – Amersham – Aylesbury Vale Parkway for the entire day. There will also be no service before 9am.

On Saturday 20, two trains per hour will operate from Marylebone to High Wycombe and one train per hour to Aylesbury via Amersham. There will be no service north of High Wycombe and no replacement bus service.

On Sunday 21, there will be no trains before 9am and there are planned engineering works between High Wycombe and Bicester, and also between Princes Risborough and Aylesbury all day, with replacement buses on some routes.

CrossCountry will be running a extremely limited service on strike days. On Thursday August 18, no train service will run between Cardiff Central and Nottingham due to the rail strikes. Services to Glasgow, Edinburgh, Penzance, Plymouth and Exeter St Davids are cancelled.

Trains will run between Bristol Temple Meads and Edinburgh – Southampton Central and Manchester Piccadilly – and between Birmingham New Street and Leicester.

On Saturday August 20, trains will only run between Derby and Edinburgh and between Southampton Central and Manchester Piccadilly.

There will also be one train running per hour between Derby and Matlock.

All Gatwick Express trains are cancelled on RMT strike days.

Only three trains will run between London and Sunderland on August 18, with all services beginning and ending in Northallerton.

On the western side, again only three trains will run, between Wakefield and Kings Cross. The only stop on those services will be Doncaster.

On Friday 19, trains are not due to start until after 7:50am. The network has yet to provide an updated timetable for Saturday 20.

On strike days, two trains per hour will run to both Bedford and Luton from St Pancras International

On Thursday 18, no services will run in Cornwall, West of Newton Abbot, on any branches in Devon, or on the South Wales main line. Services are also cancelled in the following areas: Reading and Taunton, Bath Spa and Portsmouth Harbour, Westbury and Weymouth, Swindon and Westbury, Bristol Temple Meads and Severn Beach, Hereford and Oxford, Cheltenham Spa and Swindon, Worcester and Gloucester, on the Greenford branch and North Downs line.

Additionally on Saturday 20, no services will run from Bristol to London Paddington, Cardiff to Bath, Bristol to Glouchester or Bristol to Exeter.

Has yet to update its timetable but is advising passengers not to travel on strike days.

Services will operate between Doncaster and London Kings Cross and only between 7:30am and 6:30pm.

A normal service will run as there is no strike action.

A limited timetable will be running on August 18 and 20 on Birmingham to London Euston via Northampton and Birmingham to Crewe via Wolverhampton. Trains will start at 7:33am with services finishing by 6:10pm.

On August 19 there will be limited timetable starting from 7:39am and buses replace trains between Stafford – Crewe via Stoke-on-Trent.

Lumo will run a reduced service with three trains per day on Thursday and Saturday from London King’s Cross to Edinburgh and vice versa, with four services on Friday.

On August 18 and 20, Merseyrail will be impacted by staff shortages, running an hourly service calling at selected stations only between 7:30am and 6:30pm.

There will be no trains from Chester, Rock Ferry and Ellesmere Port and no service on the Hunts Cross line.

On August 18 and 20 an hourly service will run on Liverpool to Manchester – and on Leeds to York, Ilkley, Skipton, Sheffield and Bradford. No trains will run before 7:30am or after 6pm.

All other routes will not run.

Two per hour are expected between Glasgow to Hamilton and Lanark. One train per hour is expected from Glasgow Queen St to Larbert and Falkirk Grahamston. Two trains per hour will run between Milngavie and Springburn.

Trains will only run between 7:15am and 6:30pm on strike days between London Waterloo as far as Woking, Basingstoke and Southampton and London Waterloo and Windsor and Eaton Riverside. All other main line and branch lines will not run.

On Thursday August 18 and Saturday August 20, passengers are warned only to travel if absolutely necessary. Only 44 out of 180 stations will be open. There are no rail replacement bus services for closed stations. Charing Cross and Cannon Street will be closed on both strike days. No Southeastern trains will serve Victoria on the strike days.

A reduced frequency service will run between London Bridge and Sevenoaks. Trains will also serve London Bridge-Dartford via the Greenwich, Blackheath and Sidcup branches. There will be no trains east of Dartford or south of Sevenoaks.

The first High Speed train from Ashford to London St Pancras via Ebbsfleet leaves at 7:45am. The last train to London leaves at 4.30pm. In the reverse direction the last departure from London is at 5:30pm.

The last trains back to London will also run much earlier than usual, and passengers may also be unable to board trains where a limited service is running, especially at Ashford and Ebbsfleet.

On Thursday 18 and Saturday 20 August, two trains per hour will run between London Victoria and Brighton, calling at Clapham Junction, East Croydon and Gatwick Airport only.

Two trains per hour will run between London Bridge and Brighton calling at major stations including Three Bridges, Haywards Heath and Hassocks.

There will also be limited service between London Victoria and Sutton, Epsom Downs and West Croydon.

A very limited service will run on Thursday 18 August and Saturday 20 August, with just five departures from Preston to Manchester Piccadilly and Manchester Airport throughout the day. These begin at 8.45am and the last leaves Preston at 4.50pm. In the opposite direction the last train leaves Manchester Airport at 5.10pm.

On Friday 19 August TPE will run every other hour between Edinburgh and Manchester Airport, starting at 8.10am and finishing at 8.10pm. The last train from Manchester north to Edinburgh leaves at 9pm.

On Thursday 18 and Saturday 20 August no trains will run except for an “essential travel only” service between Cardiff Central and Treherbert, calling at Merthyr Tydfil and Aberdare.

A second “essential travel only” service will run once per hour between Cardiff and Newport.

No other trains will run. There will be no rail replacement buses except on the evening of 18 August.

One train per hour will run from Birmingham to Northampton between 7.30am and 5.15pm. Trains from Northampton to London Euston will run twice per hour between 7.40am and 4.40pm.

Trains in the opposite direction run at similar times, with the first leaving Euston at 7.30am and the last northbound departure from Northampton to Birmingham at 5.30pm.

A reduced timetable will be in operation on Friday 19 August.

How will the Tube strikes affect London Overground and Underground services?

RMT and Arriva staff will walk out on Friday, August 19 and no services will be running on the Overground or Night Overground.

A reduced service is expected on Thursday and Saturday between 8am and 6pm.

Transport for London warns that on Friday, August 19, Tube services will be extremely limited or not running at all.

It says: “TfL expects severe disruption on all London Underground lines on Friday 19 August, with little to no services throughout the day due to RMT’s strike action. There will also be no Night Tube or Night Overground service from Friday evening. Customers are advised to avoid travelling on the Tube and only travel if essential on the rest of the network.”