Are clean technologies and renewable energies better for the environment than fossil fuels?

Are clean technologies and renewable energies better for the environment than fossil fuels?

This is a re-post from the CCL Blog

The grand transition from a fossil fuel-based economy to a green one is underway. It will involve a fundamental shift in the way we generate and use energy for various purposes. Instead of drilling and mining for fossil fuels, we’ll need to mine for critical minerals to manufacture a whole lot of “clean” technologies like solar panels, wind turbines, and batteries.

This raises some common questions — when we account for the impacts of the mining and manufacturing of these technologies, are they really better for the environment, human rights, and climate than the fossil fuel alternatives they’re replacing?

In general, the answer is yes. Clean technologies will have a non-zero impact, but they will be much smaller than the dirty fossil fuel status quo.

The short answer to this question is that fossil fuels require much more mining and drilling than clean energy technologies. Today the world mines 8 billion tons of coal every year, whereas the clean energy transition is estimated to require around 3.5 billion tons of minerals in total over the next three decades.

A December 2021 paper by Rice University researchers sought to answer this question in detail. Among clean energy technologies, wind turbines in particular require a considerable amount of minerals per amount of energy produced, as illustrated in the chart below from the International Energy Agency. But that chart only illustrates the minerals needed to construct the power plants. Once a wind turbine or solar panel is constructed, no further mining is needed. Their fuel (wind and sunshine) is provided by nature. Fossil fuels, on the other hand, require ceaseless mining or drilling to obtain new fuel to burn.

For example, nearly 8 billion tons of coal were mined, and over 4 billion tons of crude oil were extracted from the ground in 2020 alone globally. That’s more than the 2.6 billion tons of iron ore mined for making steel, which dwarfs all other minerals mining, as illustrated in the graphic below. For comparison, the World Bank estimates that a pathway to meet the Paris targets would require close to 3.5 billion tons of minerals in total over the next three decades. 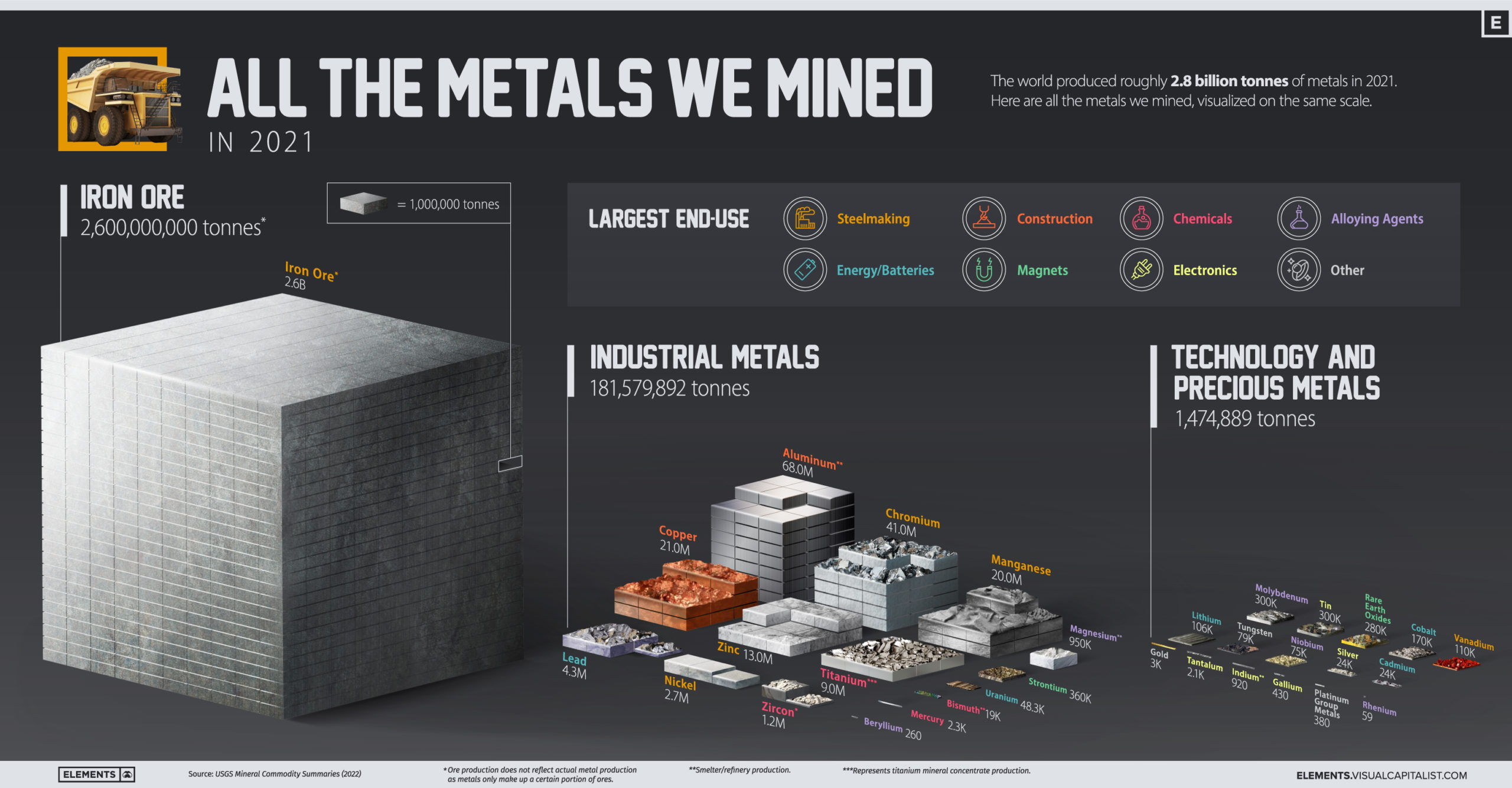 It’s a bit more complicated than that comparison because some minerals, like rare earth metals, require moving a lot of earth to obtain a bit of the desired substance. Taking that into account, the Rice study estimated that generating energy from wind turbines in Texas would require five times less earth-moving and waste than an equivalent amount of coal power.

On top of that, the environmental impacts of mining remain relatively confined to the area surrounding the mine. But burning fossil fuels additionally generates air and water pollution at the power plant, greenhouse gas emissions, and the threat of spills during fuel transport, thus creating a larger geographical pollution footprint. Air pollution causes about 250,000 deaths per year in the U.S., and nearly 9 million per year globally, especially in disadvantaged regions and communities. Conversely, a solar fuel spill is otherwise known as “a nice sunny day.”

Finally, solar panel recycling is now poised to take off as the materials become increasingly valuable due to growing solar demand. Similarly, wind turbine blades have mostly been discarded as waste (though most wind turbine material is recyclable), but advances are being made in recycling and/or repurposing the blades as well. The recycling of old materials will reduce the need for mining new minerals over time.

Don’t renewables take up a lot of land space?

Wind farms can require a large overall land footprint, but the space between individual wind turbines can be used for a variety of purposes.

The map below from Princeton’s Net-Zero America report illustrates the overall land area required in one possible 2050 clean energy scenario. Overall, the report estimates 60–270 million acres needed for clean energy. For comparison, the oil and gas industry leases close to 26 million onshore and 15 million offshore federally-owned acres and close to another 30 million acres of private and state-owned land.

However, 99% of the large blue wind farm footprint illustrated above represents the distant area from which wind turbines are merely visible. Most of the land around wind farms and even the land between individual wind turbines can be used for other purposes like growing crops or grazing animals. The physical wind turbine equipment footprint is illustrated by the small dark blue square in the above figure. The Net-Zero report envisions that more than 10% of solar panels could be installed in the built environment (on rooftops and parking lots, for example), and they can also provide shade for some crops on farms.

The Princeton Net-Zero report estimates that the clean energy transition will require about 10 million acres of land for the solar panels and wind turbines themselves. For comparison, the U.S. currently uses 38 million acres to grow crops for corn-based ethanol and biodiesel and has paved 39 million acres for roads and parking lots.

Are electric vehicles (EVs) better for the environment?

An analysis by the Union of Concerned Scientists found that even in the regions with the dirtiest electric grid mix, driving an EV will generate the same greenhouse gas emissions as a 39 mpg gas car. As the map below from the report illustrates, in numerous regions driving an EV produces less carbon pollution than a 100 mpg gasoline car. And these numbers will only improve over time as the electric grid becomes cleaner. People often wonder about the extra emissions associated with manufacturing EV batteries, and the extra weight they add to the vehicle. These are referred to as “indirect emissions,” but to make a fair comparison, we also need to consider the indirect emissions of gasoline cars — the drilling, refining, and transportation of oil.

A 2021 study did just that and found that accounting for all indirect emissions actually further reduces EVs’ carbon footprints compared to those from gasoline-fueled cars, because constantly producing more gasoline creates more greenhouse gas emissions than manufacturing and charging EV batteries.

What about the environmental impacts of mining of minerals for EV batteries?

Lithium mining can have significant adverse environmental impacts, but there are potential solutions to these problems. For example, water pumped underground to extract heat in geothermal power plants can yield lithium in a much less environmentally harmful way than mining. Progress is also being made in the development of sodium-ion batteries; sodium is one of Earth’s most abundant elements and can be obtained from seawater. Researchers are also finding ways to greatly improve lithium batteries to make them smaller and lighter and thus use less mined material.

Importantly, while we’ll need considerable mineral mining to meet growing battery demand in the coming decades, the metals in batteries can be recycled. In the future, much of the minerals needed for clean technologies will be supplied through recycling rather than the continued mining of natural resources. EV batteries have also lasted much longer than expected — essentially a vehicle’s entire lifetime — and afterwards can be used for electric grid storage.

As Kwasi Ampofo, head of metals and mining for BloombergNEF said about emerging solutions to mining concerns, “Human ingenuity knows no bounds.”

What about the human rights impacts of mining?

The mining of minerals in countries with lax regulations can lead to human rights abuses, but researchers and industries are finding alternative solutions.

One major concern is cobalt, which is needed in lithium-ion batteries. About 70% of the global cobalt supply and nearly half of known global reserves come from the Republic of the Congo. A lack of regulations has led to dangerous mining conditions there, often done with child labor.

But there are solutions to these problems. Battery manufacturers can source materials from places with robust environmental and human rights standards. Australia’s cobalt industry has been growing as manufacturers seek alternative sources. Researchers are also constantly developing new battery technologies. Lithium iron phosphate batteries don’t require cobalt and are already becoming fairly common, being used in nearly half of Chinese EVs and half of Teslas sold in the first quarter of 2022. Some success is also emerging in the use of widely available manganese instead of cobalt for lithium batteries.

We can always do better

Clean energy technologies will always have non-zero climate and environmental impacts. The best solution is to use less energy and materials to begin with. Rather than simply replacing gasoline-fueled cars with EVs, we should also try to reduce car use altogether through better urban planning and public transportation. Walking and biking (including electric bikes and scooters, a.k.a. micromobility) and riding buses and trains all have substantially lower environmental impacts than driving any car. And weatherizing buildings can reduce their energy consumption by one-third.

Thus it’s ultimately better for the environment to deploy clean technologies today than to continue interminably mining, drilling, refining, transporting, and burning dirty fossil fuels, while working toward using less energy and materials in the long-run.