This is a quick summary about the newly published paper “Assessing ExxonMobil’s global warming projections” by Professor of Environmental Science and Policy Geoffrey Supran, Professor of Physics of the Oceans Stefan Rahmstorf and Professor of the History of Science Naomi Oreskes. It leverages a thread tweeted by Geoffrey Supran shortly after publication on January 12, 2023. Please note that the full paper will only be available open access for two weeks after publication.

Climate projections by the fossil fuel industry have never been assessed. On the basis of company records, we quantitatively evaluated all available global warming projections documented by—and in many cases modeled by—Exxon and ExxonMobil Corp scientists between 1977 and 2003. We find that most of their projections accurately forecast warming that is consistent with subsequent observations. Their projections were also consistent with, and at least as skillful as, those of independent academic and government models. Exxon and ExxonMobil Corp also correctly rejected the prospect of a coming ice age, accurately predicted when human-caused global warming would first be detected, and reasonably estimated the “carbon budget” for holding warming below 2°C. On each of these points, however, the company’s public statements about climate science contradicted its own scientific data. 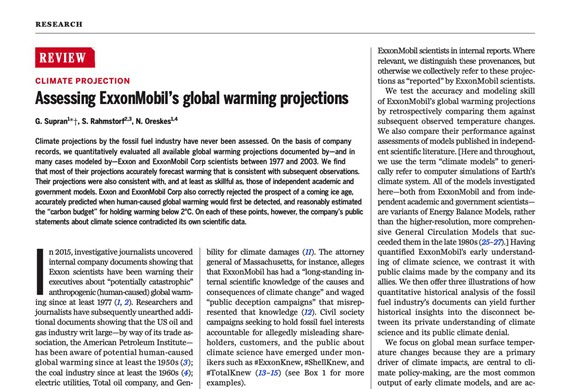 The peer-reviewed paper Supran et al. (2023) published in Science on January 12, 2023 shows Exxon scientists predicted global warming with shocking skill & accuracy between 1977 and 2003, contradicting the company’s decades of climate denial. It is the first ever systematic assessment of an oil and gas company’s climate projections. 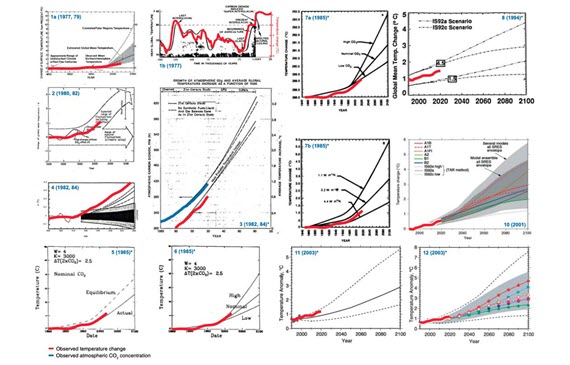 For example, below is a graph from a “proprietary” 1982 Exxon memo showing “an estimate of the average global temp increase” from 1960-2080 due to future fossil fuel burning. Overlaid are:

Immediately, the overlap is striking. 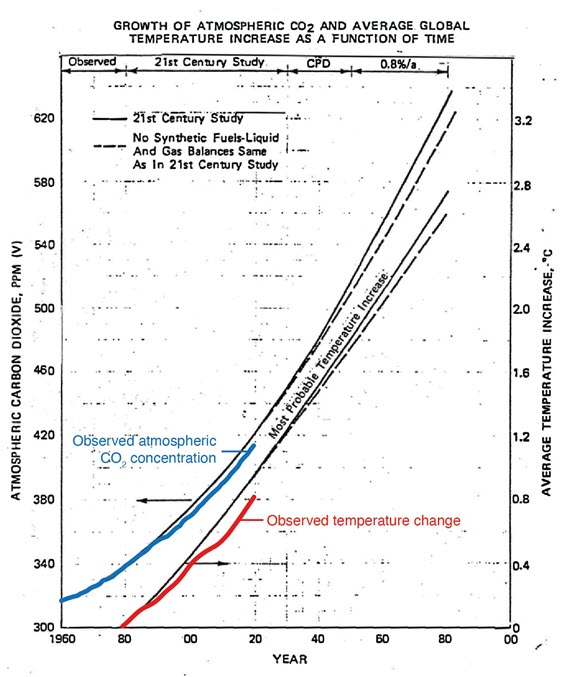 Figure 2: Panel 3 from the composite shown in Figure 1 above from Glaser (1982, fig. 3) and Shaw (1984) showing growth of atmospheric CO2 and average global temperature increase as a function of time.

Next, the authors digitized all 16 global warming projections reported by Exxon scientists, and plotted them on one graph:

This, in a single image, is what #ExxonKnew: 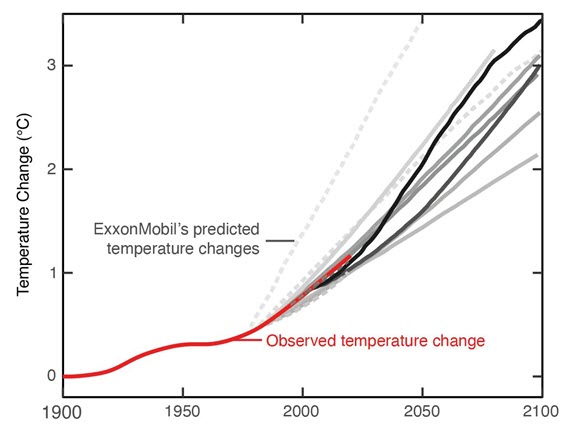 The analysis allowed the authors, for the first time, to put a number on what #ExxonKnew: that burning coal, oil, and gas was going to heat the planet by 0.20° ± 0.04°C every decade.

And they were right on the money…

Using established IPCC statistical techniques to test the performance of Exxon’s temperature predictions in comparison to historical observations, the authors find that most of Exxon’s global warming forecasts were accurate (63-83%, depending on the metric used). 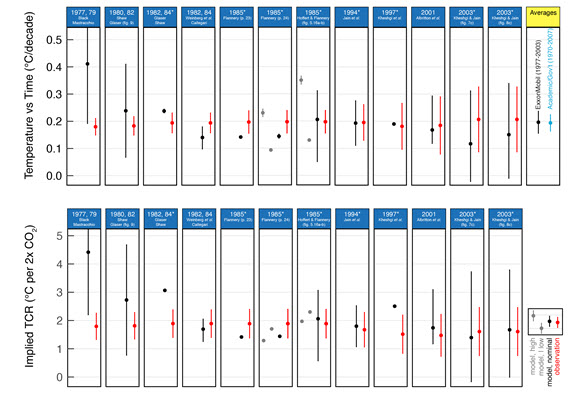 Figure 4: (Fig. 3 from the paper) Comparison of (red) historical temperature observations and (gray or black) global warming projections reported by ExxonMobil scientists in internal documents and peer-reviewed publications, as illustrated in Figs. 1 and 2. (Full caption with details)

Exxon’s global warming projections were also CONSISTENT with, and AT LEAST AS SKILLFUL as, those of independent academic and government models. Here are the stats…

SKILLFUL: Global warming projections modeled by Exxon scientists had an average ‘skill score’ of 72 ± 6%, with the highest scoring 99%.

For comparison, NASA scientist Dr. James Hansen’s predictions presented to US Congress in 1988 had skill scores of 38 to 66%. 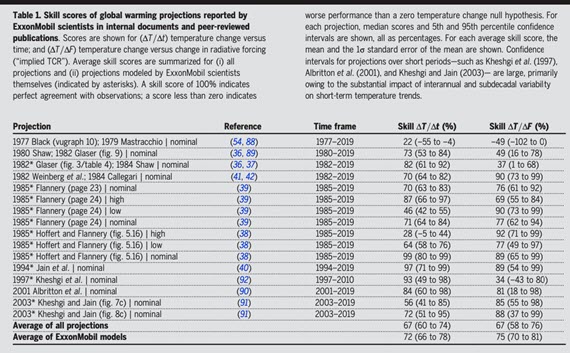 Accounting for differences between forecast and observed atmospheric CO2 levels, the ‘skill score’ of projections modeled by Exxon scientists was 75 ± 5%, with seven projections scoring 85%+. Hansen’s 1988 projections had corresponding skill scores of 28 to 81%.).

In public, however, ExxonMobil contradicted each of these conclusions. 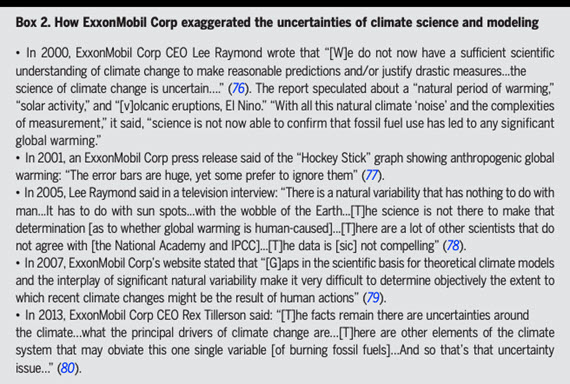 Figure 5: Box 2 from the paper – How ExxonMobil Corp exaggerated the uncertainties of climate science and modelling.

And here’s Mobil and ExxonMobil cultivating the myth that in the 1970s, there was a scientific consensus that the planet was going to cool down rather than heat up: 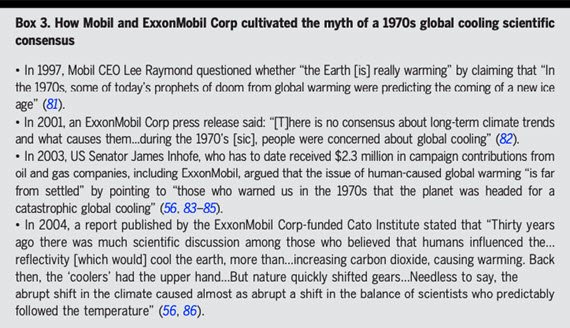 Figure 6: Box 3 from the paper – How Mobil and ExxonMobil Corp cultivated the myth of a 1970s global cooling scientific consensus.

In sum, this study is #ExxonKnew2point0. It puts a number on, and paints a picture of, what #ExxonKnew, which is that burning fossil fuels would heat the planet by 0.20° ± 0.04°C per decade.

We now have airtight, statistically rigorous evidence that Exxon accurately predicted global warming years before it turned around and publicly attacked climate science and scientists.

In that sense, this graph (Figure 3 from above) doesn’t just communicate a crisis, it confirms complicity.

Upon publication, the paper triggered a flurry of articles, some of which are listed below:

The Guardian – Revealed: Exxon made ‘breathtakingly’ accurate climate predictions in 1970s and 80s