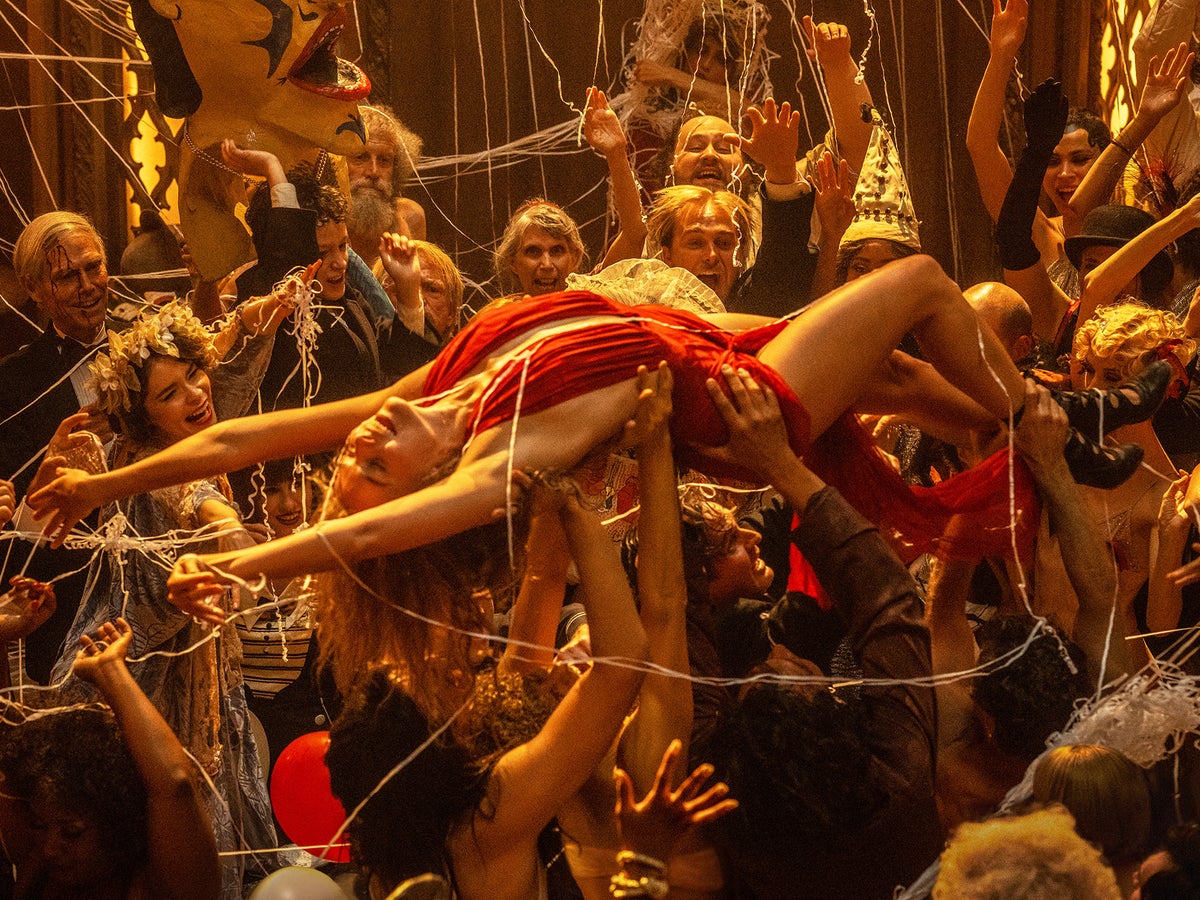 Tailor-made to divide audiences, this debauched drama – and a clear repudiation to those who once accused Chazelle of being too sentimental a director – puts a bullet in the head of any notion that the film industry’s silent era was ever austere or quaint. This was a frontier time, where the art of cinema was built from the ground up with zero rules and very little restraint. It was a place where the soul-sick and hungry could reinvent themselves, but not without considerable personal cost.

We enter this world through the eyes of two such ravenous individuals, actress Nellie LaRoy (Margot Robbie) and film assistant Manny Torres (Diego Calva). Both are fictional amalgamations of real-life figures, as almost all the characters of Babylon are. Nellie combines aspects of Clara Bow, Joan Crawford, Jeanne Eagels, and Alma Rubens. The Mexican-American Manny is a stand-in for the many immigrants who carved out spaces for themselves within the industry.

The duo intertwine not only romantically, but spiritually, too – twinned stars on a rapid-fire ascent. Calva wears a poet’s heart on his sleeve, and beautifully so, while Robbie’s feral performance feels extracted from some higher plane of existence. The film may have an extensive ensemble cast, but it’s Robbie who funnels the true spirit of Babylon. She wrestles with (literal and metaphorical) snakes and bids adieu to polite company with the killer line: “I’m gonna go stick some coke up my p****”.

The film’s vision of the Twenties may be propelled to the very border of believability, but it’s rarely inauthentic. This is a work of studious imagination. Justin Hurwitz’s hip-shaking, feet-stomping jazz score is pulled right from the underground music scene of early Los Angeles. When a newly famous Nellie steps out in a blue-sequinned, skimpy two-piece, she may seem ready to party down at Studio 54 decades later, but Mary Zophres’s costume work is extrapolated directly from the daring looks already sported by Clara Bow and her ilk. Nellie’s hair and makeup, by Jaime Leigh McIntosh and Heba Thorisdottir, were partially inspired by mugshots from the era.

But it’d be a mistake to believe that Babylon presents excess merely for excess’s sake. These extremities call to mind F Scott Fitzgerald’s portrait of the Jazz Age, in which material splendour was the gauzy curtain pulled across the corruption and carelessness beneath. Chazelle’s film is really about the cost of immortality – what it takes to achieve that one perfect moment, like the single tear Nellie conjures in her first on-camera role.

Reinvention is a playground to some, like established star Jack Conrad (Brad Pitt, whose presence is coloured by the recent accusations of domestic violence by ex-wife Angelina Jolie, which he denies). He gets to dip his toe in a little white exoticism by painting himself as an Italian lover. But it’s a stark contrast to singer Lady Fay Zhu (Li Jun Li), who must carefully cultivate a kind of sensual Orientalism whenever she enters white spaces. Or Black trumpet player Sidney Palmer (Jovan Adepo), who’s offered a chance at screen stardom – in the film’s starkest, most painful scene – only if he darkens his skin in order to comply with the industry’s racist preconceptions. In Babylon, you have to stand out to be seen, but only as long as it doesn’t upend social norms.

The film, which opens in 1926, frames Hollywood’s transition into the sound era as one of creative catastrophe. Directors become confined to poky soundstages. Actors must hit their marks in order to be heard by the microphones. A new conservative moral code starts to take hold as the industry becomes increasingly corporatised. Chazelle draws a throughline from here to the most famous depiction of the silent era on film, 1952’s Singin’ in the Rain, and then onwards into the modern era – how he achieves it feels too wondrous and surprising to spoil here. The film then closes on a character’s silent tears. Are they crying at the transcendent beauty of it all? Or at the pain suffered in its creation? Chazelle, in his ultimate provocation, leaves the answer unclear.

‘Babylon’ is in cinemas on 20 January