Nick Clement brings us his thoughts on one of this year’s most talked-about horror movies with this Barbarian review. 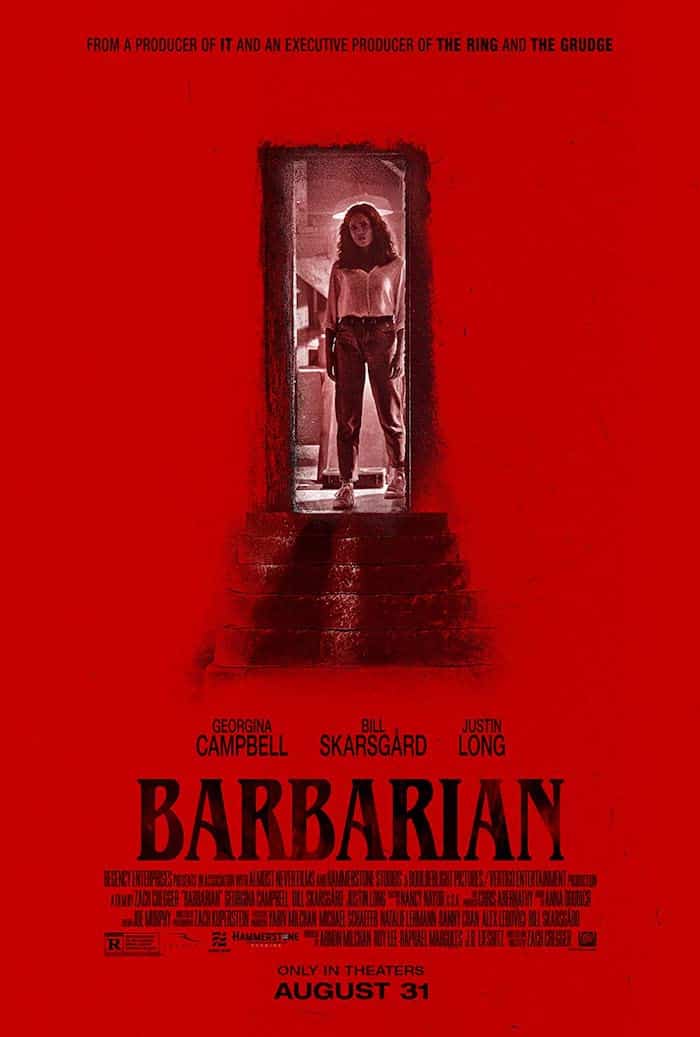 A young woman discovers the rental home she booked is already occupied by a stranger. Against her better judgment, she decides to spend the night but soon discovers there’s a lot more to fear than just an unexpected house guest.

This is a nasty little spooker, and it’s currently streaming on HBO MAX.

There’s also a thick layer of black comedy that I found to be quite bracing and hilarious (Justin Long POWER!), and the disgusting particulars to the plot should be left unspoiled for the unaware.

These days, it seems like indie horror filmmakers are tying to one-up each other in the transgressive violence department, and in that sense, this film definitely takes the current top spot, though I’m sure there are plenty of other offerings that are more extreme than this one (not sure I need to find out – lol).

Excellent camerawork from Zach Kuperstein and fully committed performances propel this absurd and vile horror movie from writer/director Zach Cregger, who is most likely taking meetings with everyone all over town after this became a big sleeper hit in theaters.

Sean – What I will add to Nick’s review is that I found the movie to be very smart in its delivery. The twist was unexpected and the whole film feels well-rounded and nicely polished. Both comedy and horror films have this perfection when it comes to the  execution of a certain line or event delivery. It’s what both genres have in common and Barbarian does that with ease.

Whilst the ending is more silly than scary the film has already leapt over countless horror movies that have been released this year that time after time, just don’t get it.

Not only does Barbarian understand the need to deliver a solid horror movie but it embraces areas that other films don’t dare to dive into and the payoff in terms of the film’s success is quite the reward for such a gamble.

It’s quite the viewing experience in an absurd and gross-out way but this film is driven by strong performances and a sadistic desire to excel where other independent horror movies have failed before it. A real sleeper hit of 2022.