A million dollar race horse was sent to a white veterinarian for a routine procedure, and never made it out alive. That race horse’s name was “Black Lives Matter” and he was owned by the first Black family to race quarter horses in all of Texas.

Keelron Hatley spoke with The Shade Room about his experience with the Weems and Stephens Equine Hospital In Aubrey, Texas and revealed why he believes his horse’s death was not an accident, but in fact racially motivated neglect.

He claims that the veterinarian’s behaviors changed immediately when they found out his horse’s name.

He tried to prevent them from doing the procedure on his horse after they began being uncooperative and disrespectful, but it was too late.

Despite the fact that the equine hospital denies any wrongdoing, the Hatley family is now suing the veterinarian for millions of dollars for the death of their prized horse.

Could this have just been an unfortunate accident? Or could there be foul play involved? The Shade Room investigates…

Hatley knows horses. His family is known as the first Black family to race quarter horses in all of Texas.

One of those stallions, the aforementioned “Black Lives Matter,” made headlines back in January for winning in the Louisiana Downs. The horse won again at the Sam Houston Derby, where the Hatley’s took home a $15,000 prize.

However, all of that came to a screeching halt in July, when the family says they took BLM to the veterinarian for a routine procedure.

They say they saw red flags instantly when the vet’s behavior started to change upon learning the horse’s name.

A day after the procedure. the horse was dead. A video of the family learning of the horse’s death went viral on TikTok shortly thereafter.

It was a $10,000 procedure at Weems Equine Hospital in Aubrey, Texas.

BLM was supposed to have been castrated and have his sperm collected for future breeding purposes. Hatley says that BLM was there for three weeks, and they called to check in periodically. 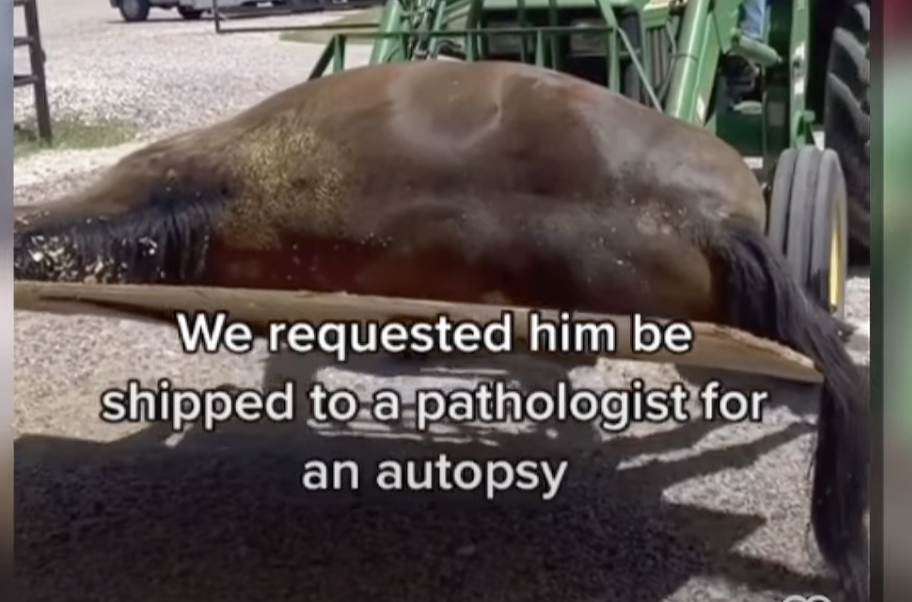 He wanted video recordings to monitor the horse’s condition, but he received pushback from the veterinary clinic.

Hatley says the clinic told him they “weren’t here for (his) social media needs.”

“They said ‘we’re not here for your social media needs,’ and hung up in our face,” Hatley told TSR Investigates’ Justin Carter. “This is the way you’re treating me? Now I just don’t trust you, or nothing else that’s going on, so don’t touch him. Don’t touch him.”

But a text message that followed from another employee said “I won’t be there for the castration, but I will see if one of the tech’s can take pictures.”

After a few text back and forth, that employee ultimately sent a message saying “I just spoke to my bosses and they said no pictures. Sorry!”

Hatley then responded with “just tell them don’t do it (the procedure).”

But by that point, Hatley says it was too late, and that they had already started the surgery.

He got a phone call the next morning.

“She said ‘the surgery went well, the post-op went well, he was up, but he passed away some time last night or this morning,’” Hatley said. “I said, ‘passed away? you got to be kidding me, right?’”

No Explanation Given For BLM’s Death, Autopsy Inconclusive, But Family Says It Was “Absolutely” Intentional

Hatley says they gave him no explanation for the horse’s death, and an autopsy came back inconclusive.

“They said there was so lesions on his head and on his body. But they didn’t specifically say what caused his death,” he said.

When asked if he believed the veterinarian did this intentionally, he responded with “absolutely,” and added “there had to be some negligence done to him.”

The animal hospital does have a high rating online, and is known as a full-service surgical and laboratory critical care equine hospital.

A quick look through the staff directory shows an overwhelming majority of white veterinarians.

The Shade Room Gets An Exclusive Look At Hatley’s Lawsuit, Seeking $5 Million For Alleged Negligence

The Shade Room had an exclusive first look at the lawsuit documents, filed September 16, which read:

“The defendants breached their duties and were negligent, grossly negligent and/or acted with malice by failing to document and keep records for care provided, failure to monitor the horse, failure to provide post-op care,” amongst several other complaints.

The lawsuit also claims the animal hospital “failed to adequately hydrate the horse,” “administered medication to the horse without knowledge of its side effects,” and “performed the castration procedure in 100 degree temperatures.”

The Hatley’s are seeking $5 million.

Family Says Horse Was Source Of Harassment Due To Controversial Name, Claims It’s Death Was No Different

Hatley says he had been harassed because of BLM’s name in the past, and this was no different.

“It was that bad. He almost had to be body-guarded because of that name.”

He added that the American Quarter Association tried to ban the horse over its controversial name, but they gave in after Hatley threatened to get his lawyer involved.

They said they had big plans for BLM, but that won’t happen now.

We reached out to the animal hospital for comment, and were still waiting to hear back by the time of this article’s publication.