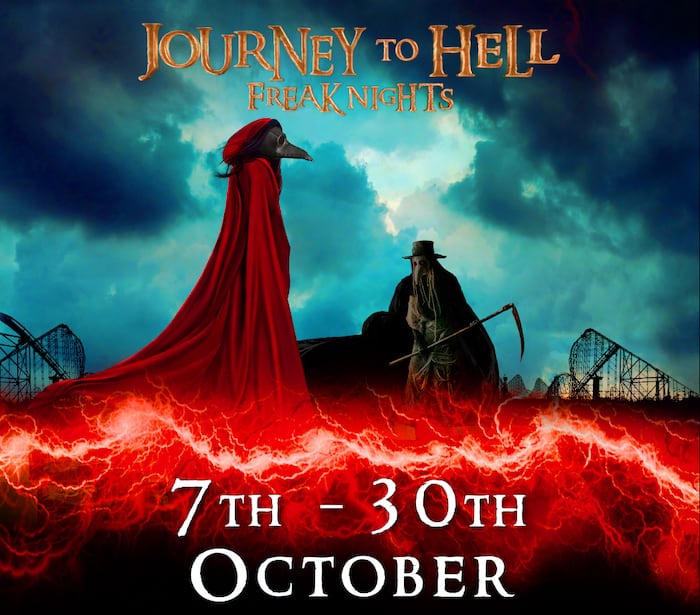 Set inside Blackpool Pleasure Beach at night this new free-roaming format for Journey to Hell has you wandering around with ticket stubs to enter certain rides or mazes.

It’s certainly not a journey format like it was before and whilst this new format does work in terms of flexibility to pick and choose the attractions you wish to visit it just becomes a walk around a dead theme park at night. It’s cool but there’s zero atmosphere tailored to this Halloween event outside of The HUB.

The HUB is a bar area that includes a hive of activity including a guy playing the guitar on stage, a giant werewolf which stalked the crowd in the Ghost Train queue and another 4 roaming actors interacting with the crowd. This area accompanied by some light theming made for a nice little space and introduction to the event. But the effort ends there.

Pleasure Beach isn’t a big park and a little effort could have gone into theming other areas of the park to make you feel immersed in the Halloween experience but Journey to Hell is always an event done on a budget and the second our experiences began this further proved our point.

Some cotton wool cobwebs and rubber spiders lined a particular maze and metal railings with black sheets over them made up for around 80% of the brand new The Lost maze located in the old Space Invader ride building. Most of the positive reviews I’ve seen for this maze are from enthusiasts who were just happy to walk around this building that has been closed off to the public for many years with absolutely no reference to the grocery shop window Halloween theming that lined this awful maze.

Timescales certainly seem to be a major issue here as the mazes felt like they had been crafted in a couple of weeks with little in the way of effort or theming.

Actors were also hit and miss with many feeling like staff members who had been asked to shout ‘boo’ at members of the public at various intervals and other actors were more convincing but with little in the way of theming to work with, there was zero immersion in the story they were telling.

One room that did impress me in terms of theming and that was a butcher’s scene in Hell Tunnels. This room has been around since the original event began and looks the part, it’s the shame that this level of theming isn’t spread throughout that experience, it’s easily the best bit of Hell Tunnels as nothing else happens throughout. Once again it’s a maze where the only positive reviews I’ve seen discuss the unique setting of the maze (tunnels under the Pleasure Beach) and shy away from the low-budget/poor maze experience.

Blackpool Pleasure Beach Journey to Hell 2022 just doesn’t work as a concept and as I’ve said year after year a company needs to step in and take over this event as Pleasure Beach just can’t seem to execute the right balance.

Improvements have been made such as actors in the Ghost Train but these are no-brainer additions that should have been implemented from the beginning. It’s clear to see that the park is unable to host a Halloween event independently. I did rather enjoy the Ghost Train with actors, it was rather immersive but it just needed more actors as the empty space between scares got a little dull but it worked when they did pop out as you’re riding around in the cart. 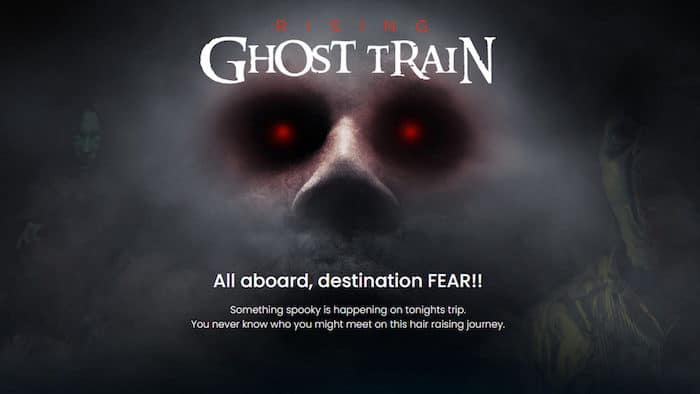 The one major complaint of the evening from many was the pricing. Journey to Hell costs £39 which is one of the most expensive horror attraction experiences in the UK this season.

Walking around a park at night, riding a ghost train, the river caves and two rollercoasters (only one for us on the night as the weather closed the Big One coaster) doesn’t justify at £39 spend.

I can’t even include the mazes in the value-for-money line-up as I’ve been to events where this calibre of maze quality has been free to the walkthrough (For the Love of Horror 2019 springs to mind) or at the very least a maze where we have been charged a much smaller amount.

Not just one but two members of staff we encountered told us about the train ride and told us to skip it as it was, and I quote, F**king S**t. We laughed as we couldn’t believe what staff members had just said to us but from the reviews I’d seen, they weren’t wrong.

We also had another staff member thank us for paying £39 for the pleasure of the event. When staff members are openly trolling us, knowing full well this event isn’t worth that, that’s when you have a problem.

I felt so sorry for staff members who were clearly not happy with the event to be so vocal about it. They put in so much effort to deliver an experience but it’s hard to do so in such poor surroundings.

After being told that rather brutal assessment of the ride we decided to skip it.

With the Big One closed we sadly couldn’t ride it in the dark but the park did let us use our Big One ticket for another event of our choice. With us not wanting to go back on anything whatsoever we headed to the Hub to get rid of our re-entry ticket to find a few other members of the public trying to give away their stubs for a free re-entry too.

A little group of us huddled around the Hub like ticket scouts at a football game as we desperately tried to get rid of these re-entry tickets. No takers.

That speaks volumes that absolutely no one took us up on an offer of a free ride or re-entry into another attraction at the event.

Mazes involved us standing with our backs to a wall and being talked to. It was a theatrical approach to a scare experience but with no scares of note, it just doesn’t work. I don’t want my back to a wall being talked to, I want to be walking through unique and well-thought-out mazes and being scared witless.

It’s genuinely scarier walking through Blackpool at night (and costs less too) and the only reason I had fun was because of the wonderful company I was with and absolutely nothing to do with Journey to Hell.

We ended the night in Pasaje Del Terror and for £12 had a better horror experience in 4 minutes than we had all night in Journey to Hell.

Pasaje or a similar scare company needs to step in full-time and give Blackpool a much-needed helping hand. I couldn’t believe they charged £39 for something so low budget relying on rides that you can do every late-night riding event of the season. I know times are hard but this felt like a real slap in the face.

I hope and pray they step it up next year and spend a lot of time and effort towards building an event worthy of such a prestigious and wonderful park.

Blackpool Pleasure Beach Journey to Hell 2022 needs to decide what it wants to be. It feels lost and it feels cheap.

Please sort it out.