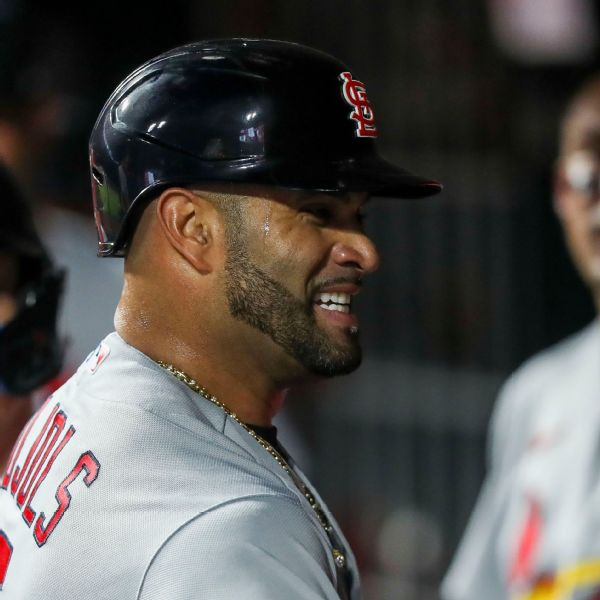 On Monday night in Cincinnati, the St. Louis Cardinals slugger hit career home run No. 694, and it came against a 450th different pitcher, a big league record.

This time, it was Reds reliever Ross Detwiler who was on the wrong end of a drive by Pujols, who lined a 369-foot, two-run homer to right field in the third inning, giving St. Louis an 8-0 lead and breaking a tie with Barry Bonds. The Cardinals won the game 13-4.

“Obviously, his career speaks for itself,” Detwiler said. “All of his numbers are better than anything I’ve seen in person. It is kind of unbelievable. He’s been so good for so long.

“I got ahead of him. I tried to go high fastball. I didn’t get it high enough, and it leaked over the plate a little bit more than I wanted it to. The ball jumps off his bat.”

It continued a remarkable run for the 42-year-old Pujols, who has eight home runs in August alone, tying Bonds (April 2007) and Carl Yastrzemski (July 1983) for the most in a single month by a player aged 42 or older. It’s the most home runs Pujols has hit in a single calendar month since June 2015, when he hit 13.

He had just seven from April through July this season.

“It’s pretty special,” Pujols said of the crowd in Cincinnati, where many fans were wearing Cardinals gear and gave him warm welcomes each time he stepped to the plate. “The energy is pretty special. It means a lot to me. Right now, I’m enjoying it.”

It was his 134th career home run in August, Pujols’ most prolific month. He broke a tie with Alex Rodriguez for second behind Bonds’ 148.

Pujols has reached 15 home runs in a season for the 21st time in his career, which ties Bonds for the most in major league history.

“We’re having a blast watching him do what he’s been doing,” St. Louis manager Oliver Marmol said. “He’s swinging the bat well. He stayed on that pitch well. It was a good swing all the way around. When he gets hot, it gives everybody confidence.”