This is a re-post from Carbon Brief by Ayesha Tandon

The droughts seen across the northern hemisphere this summer were made “at least 20 times more likely” by human-caused climate change, according to a new “rapid-attribution” study.

The summer of 2022 saw Europe’s worst drought in 500 years. A combination of record-breaking temperatures and low rainfall caused rivers to dry, wildfires to rage and crop failures to compound already high food prices.

Elsewhere, the American west experienced its most extreme drought conditions in 1,200 years and sections of the Yangtze – China’s longest river – reached their lowest level since at least 1865 amid extreme temperatures and a “severe lack of rainfall”.

The World Weather Attribution service finds that droughts of this intensity can be expected across the northern hemisphere once every 20 years in today’s climate. Yet, in a world without climate change they would be expected only once every 400 years or less.

The team also focused on the central-west European region, where they find that climate change made the drought three-to-four times worse.

Climate change is causing “compounding and cascading risks”, an author on the study told the press briefing. For example, the extreme droughts caused crop failures at a time when “world markets were already struggling with the impacts of the Ukraine war”.

In September 2022, following months of intense droughts across the northern hemisphere, BBC News published an article under the heading: “China, Europe, US drought: Is 2022 the driest year recorded?”

From the beginning of May to mid-September, back-to-back heatwaves had swept across Europe, giving the summer the title of “hottest on record”. Two-thirds of Europe found itself under drought warnings in what some reported as the continent’s worst drought in 500 years.

The drought had severe impacts on agriculture. For example, the Po River basin in northern Italy experienced its worst “water crisis” in approximately 70 years, disappearing completely in some areas and leading to a 30% drop in the rice harvest. As similar stories played out across Europe, fears of a global food security crisis grew.

“World markets were already struggling with the impacts of the Ukraine war, both on food prices and through fertiliser. We had already seen a few other climate shocks on those agriculture prices, including the South Asia heat in India and Pakistan…You saw shocks rippling through the global system.”

He added that the drought also exacerbated the energy crisis – by reducing hydroelectric power supply, limiting the efficacy of water cooling for nuclear plants and making it harder to use rivers to transport coal.

Meanwhile, the most extreme drought conditions in 1,200 years were recorded in the American west. The Guardian called the event a “megadrought”, noting that Lake Mead and Lake Powell “are at record low levels and steadily shrivelling” and adding that “wildfires now spark year-round as parched forests and grasslands are more primed than ever to burn”.

Elsewhere, China was hit by its most severe heatwave in six decades. Sections of the Yangtze reached their lowest level since at least 1865, limiting hydropower, halting shipping and forcing major companies to suspend operations.

There are many ways of defining drought. For example, hydrological drought focuses on the amount of rainfall a region receives, while pluvial droughts that focus on surface and groundwater flows.

This study focuses on “agricultural and ecological drought”, which measures soil moisture content. The authors investigate “surface” and “root zone” soil moisture – which measure the amount of moisture in the top seven centimetres and top metre of the soil, respectively.

Dr Dominik Schumacher is a postdoctoral researcher at ETH Zurich, and coauthor on the study. He told the press briefing that measuring agricultural and ecological drought at the root zone is “particularly important”, because most plants take in water at this depth.

The authors investigate the role of climate change on soil moisture over June-August 2022 across the northern hemisphere, excluding tropical regions. They also focus on a smaller region of west-central Europe over the same period.

The maps below show soil moisture in the root zone (top) and surface (bottom) in June-August 2022, compared to the 1950-2022 average. Red shading indicates drier than average conditions, while blue indicates wetter. The red shape indicates the west-central European study region. 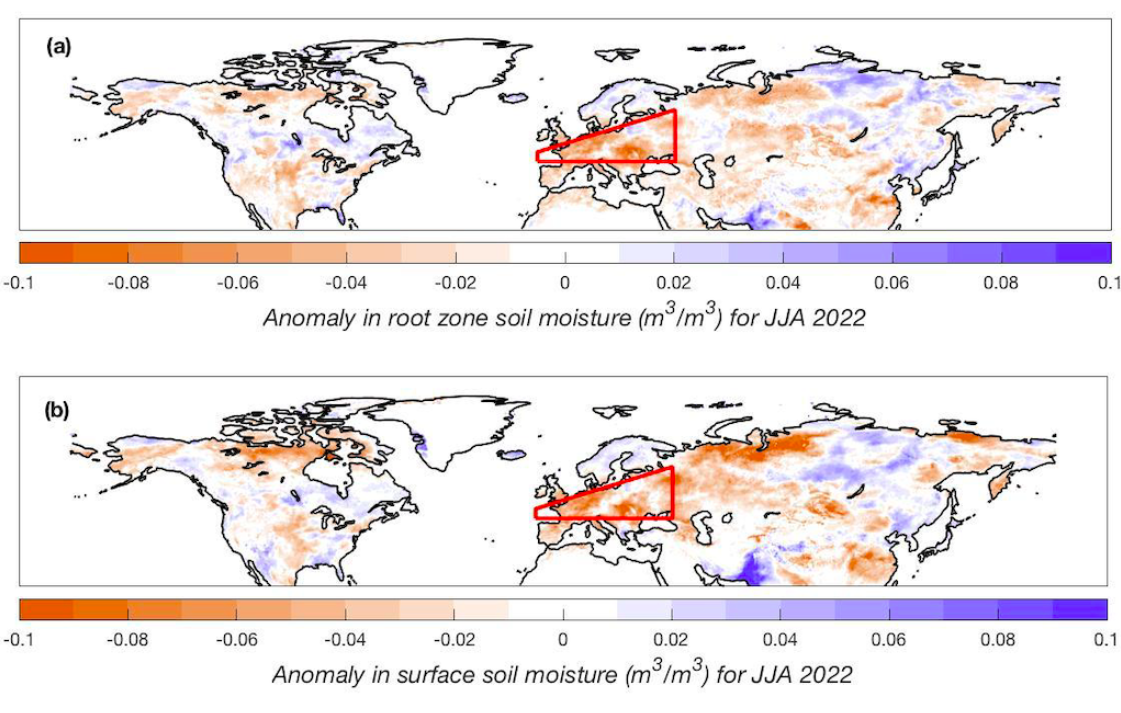 Attribution is a fast-growing field of climate science that aims to identify the “fingerprint” of climate change on extreme-weather events, such as heatwaves and droughts.

The authors start by putting this summer’s extreme drought into its historical context by analysing an observed dataset of drought that stretches back for decades. They find that in today’s climate – which has already warmed by 1.2C due to human-caused climate change – a drought like this summer’s can be expected, on average, once every 20 years.

When focusing on west-central Europe, the authors find that human-caused climate change made the droughts three-to-four and five-to-six times more likely in the root zone and on the surface, respectively.

The high temperatures seen across the northern hemisphere would have been “virtually impossible” without climate change, the study adds. It concludes that the impact of climate change on temperatures was the main driver of the drought, with changes in rainfall less important.

The study concludes by investigating how much more frequent and intense drought could become in the future. Under global warming of 2C above pre-industrial temperatures, they estimate that droughts will become 15-30 times more frequent in the northern hemisphere, and twice as frequent in west-central Europe.

(The findings are yet to be published in a peer-reviewed journal. However, the methods used in the analysis have been published in previous attribution studies.)

It is “relatively unusual” for the World Weather Attribution service to perform a study looking at such a large region, Prof Fredi Otto – a senior lecturer at the Grantham Institute for Climate Change and the Environment at Imperial College London and author on the study  – told Carbon Brief in the press briefing.

This is because attribution studies tend to focus on the region where impacts are strongest, she explained. In this instance, the widespread impacts of drought across the northern hemisphere warranted a study over this region.