NEW YORK — Coco Gauff reached the US Open quarterfinals for the first time by coming back in each set to beat Shuai Zhang of China 7-5, 7-5 in front of a partisan crowd at Arthur Ashe Stadium on Sunday.

The 18-year-old Floridian, the runner-up at the French Open in June, trailed 5-4 in the opening set, then 5-3 in the second, which she was a point from losing.

But buoyed by spectators who cheered her every point, chanted “Let’s go, Coco!” as the end neared and prompted Zhang to cover her ears with her hands, Gauff improved to 4-0 in Ashe this year. She’d never previously won a match at the biggest arena in Grand Slam tennis.

“It feels insane. I mean, Ashe Stadium chanting my name?” Gauff, yet to drop a set in the tournament, said during her on-court interview. “I was trying not to smile on the bench on the changeover. I was trying to stay in the moment.”

Gauff is the youngest American woman into the US Open quarterfinals since Melanie Oudin was 17 in 2009.

Gauff also was the youngest player from any country in the fourth round of the women’s bracket at Flushing Meadows this year. Zhang, at 33, was the oldest.

They both competed mostly from the baseline, trading powerful groundstrokes, especially on the backhand side, which both players favor. And the longer the exchanges, the more success Gauff found: She claimed 45 points that lasted five or more strokes, while Zhang won 26 of those.

Now the 12th-seeded Gauff will move on to face No. 17 Caroline Garcia of France, who is playing as well as anyone at the moment, coming off a hard-court title at Cincinnati right before play began in New York. 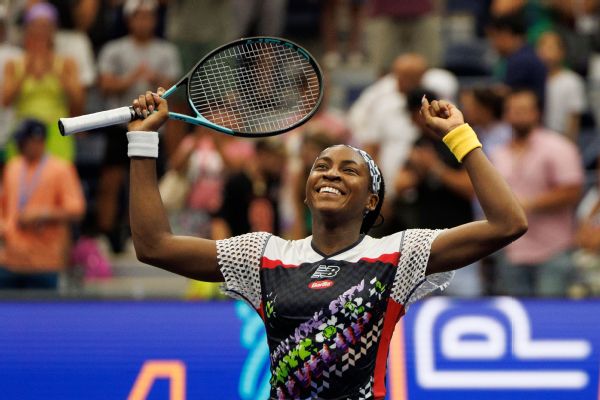 Garcia eliminated No. 29 Alison Riske-Amritraj of the U.S. 6-4, 6-1 to, like Gauff, earn her debut berth in the US Open quarterfinals.

Indeed, none of the eight women in action Sunday had ever been past the fourth round at Flushing Meadows before; only two have ever been to the semifinals at any Grand Slam tournament: Gauff and No. 5 Ons Jabeur, once apiece.

Jabeur, who got to the final at Wimbledon in July, was scheduled to meet No. 18 Veronika Kudermetova at night.

Gauff kept creating opportunities with her best shot, a down-the-line backhand. That’s what forced the error by Zhang to hand over a break for a 6-5 lead for the American. It’s what produced a winner to close out the first set.

The whirring of the Ashe retractable roof being pulled shut accompanied the start of the second set because of showers that started soon after, and it took a while for the artificial lights to reach full strength. The match proceeded, even though it was rather dark — and quite humid — indoors.

Zhang started getting a bit better of the back-and-forth midway through the second set, and when she hit a backhand winner of her own, she broke to lead 5-3.

The Grand Slam doubles champion served to force a third set there, and was a point away from getting there, but Gauff steeled herself and stood her ground.

That set point was frittered away when Zhang sent a backhand long. Gauff then smacked — what else? — a down-the-line backhand winner for her third break point of that game, then delivered a good return to a corner that drew a long backhand to make it 5-4 and start a four-game, match-closing run.