COPS have launched an urgent hunt for a woman seen running away after a crash which left a seven-year-old boy with a broken leg.

The hit-and-run driver crashed into the youngster – leaving him with a fractured eye socket and broken leg – before pulling up a few metres down the road.

CCTV footage shows the woman jumping out of her car and running in Wolverhampton, West Midlands, on May 30.

The clip released by cops then shows the woman in the pink jacket and black trousers running in the opposite direction, back towards her car.

She stops at the driver’s-side door and gesticulates down the road.

Cops have launched an appeal to help identify the driver. 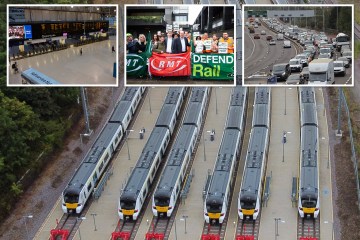 Brits have been urged to contact West Midlands Police if they know her – or if they have dashcam footage of the crash.

A West Midlands Police spokesperson said: “We are appealing to identify the driver of a car after a boy was hit in Wolverhampton.

“The collision happened on Bridgnorth Road at 9pm on May 30, where a boy, aged seven, was injured.

“The driver of the car stopped just up the road from the collision.

“She got out the car but failed to give any details and her registration plate was not captured on any CCTV.

“The boy suffered a fractured eye socket, a broken leg and bruising to his face.”

Share
Facebook
Twitter
Pinterest
WhatsApp
Previous articleWhat can’t you do under a hosepipe ban? Check your postcode to see which rules are in place
Next articleCape Town is calling: South Africa’s captivating coastal city is buzzing with new attractions