Cranky Uncle getting ever more multi-lingual with Spanish and Portuguese added!

Cranky Uncle getting ever more multi-lingual with Spanish and Portuguese added!

Posted on 2 September 2022 by BaerbelW

As of August 20, 2022, the Cranky Uncle game is available in English, Dutch, German, Spanish and Portuguese and can be played on iOS or Android devices as well as in the browser. More languages are already in the queue and this blog post will be updated whenever a new language gets launched. In addition, there’ll be language specific announcements linked via the flag-icons at the top. These will be created by the translator teams and will most likely go into more language specific details or explain some particularly tricky or interesting translation challenges.

August 2022: With the addition of Spanish and Portuguese, v3.0 of the Cranky Uncle game can now be played in 5 languages! In addition to adding new languages, this version of the game also eliminates the need to login with an email-address or groupcode.

February 2022: The multi-lingual v2.0 was launched with German and Dutch as the first two languages the game could be played in apart from English. 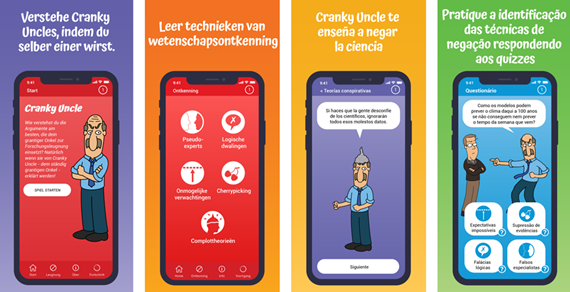 A brief recap of the game’s history and motivation

It’s been a long journey to get us to this point. We ran our initial crowd-funding campaign back in January 2020 and thanks to generous donors, we worked with creative agency Goodbeast to develop and launch v1.0 of the game in December 2020. Our next goal had always been to develop a multilingual version of the Cranky Uncle game and thanks to some additional funding support from Monash University, Cranky Uncle initially learned Dutch and French and started to teach people how to identify the science denial techniques in these two languages in February 2022. In August 2022, Uncle Cranky is still doing his thing, now also speaking Spanish and Portuguese.

The Cranky Uncle game adopts an active inoculation approach, where a Cranky Uncle cartoon character mentors players to learn the techniques of science denial. Cranky Uncle is a free game available on smartphones for iPhone (sks.to/crankyiphone) and Android (sks.to/crankyandroid) as well as web browsers (sks.to/crankybrowser). The player’s aim is to become a “cranky uncle”—a science denier who skillfully applies a variety of logically flawed argumentation techniques to reject the conclusions of the scientific community. By adopting the mindset of a cranky uncle, the player develops a deeper understanding of science denial techniques, thus acquiring the knowledge to resist misleading persuasion attempts in the future. More information about the game and its scientific background is available in the article “Teaching students how to spot climate misinformation using a cartoon game” published in the journal Plus Lucis.

Since the game’s release in December 2020, John Cook has made several resources readily available for educators and anybody interested in exploring how the game can be used to teach critical thinking. These resources have been compiled in a blog post and at least some of them will also be translated into other languages. The central resource is the “Teachers’ Guide to Cranky Uncle” which is currently available in English, German and Dutch:

Under the hood of the translation effort

In addition to necessary updates of the game’s code base tackled by creative agency Goodbeast (formerly Autonomy), we also had to translate all of the content, a task coordinated by Bärbel who also tackled the German translation. In July 2021, we put out a call for help with the translations and we soon had several teams working on translations into many languages. Nienke joined the effort early on for translations into Dutch so we decided to move ahead with both German and Dutch as the initial languages of the multi-lingual V2 of the Cranky Uncle game. For the Spanish version we counted on Yasmina, and together with her, Jose helped in the revision process. The Portuguese translation was tackled by members of the dedicated team – all located in Brazil incidentally – who have worked on many SkS-related translation projects for many years.

If you’ve played the Cranky Uncle game already, you’ll know that there is quite a lot of text– which all needed to be translated. All told, there were over 2,000 terms, questions, answers and whole paragraphs in need of translation – per language! The translation teams collaborate in Google sheets to create and proofread their translations. Once done, all of that content needs to be – manually and one element at a time – copied from the sheet into the content management system (CMS) Strapi, a not really fun, but necessary task requiring dozens of hours of work. And in case you are wondering: yes, we entertained the thought of finding a way to import the translations into Strapi but figured that setting this up and then testing it to make sure it worked would take longer than doing it the hard way.

What to do with questions relating to specific cultural aspects?

This last question, of specific cultural aspects, is especially important in the case of Spanish. Spanish is the native language of about 475 million people worldwide, ranking second in the world after Chinese, with English in third place. One of the main concerns when translating into this language was to make it understandable and accessible to as many Spanish speakers as possible.

There is a great variety of expressions, vocabulary and sense of humor in the different regions and countries where Spanish is spoken, most notably between European Spanish and that spoken in Latin America. Another special characteristic of Spanish is that there are different ways of addressing a reader or listener depending on the level of relationship and formality. We think that Uncle Cranky is anything but formal and somewhat irreverent, and that is the tone we kept in this  first translation and we believe that as he is, we will forgive him because he is our favorite uncle and we learn a lot from him, although not as he would like to.

We had to solve some creative translation tasks which made this quite an interesting activity. Here are a few examples of what we termed “tricky to translate content”.

To begin with, translators had to come up with 35 moody terms fitting for a Cranky Uncle getting ever crankier as players reach a new level in the game. John had come up with a list of 35 English terms and it proved to be more difficult than expected for some languages to a) come up with that many terms and b) somehow rank them from not all that cranky to exceptionally cranky! Don’t believe us? Give it a try yourself! 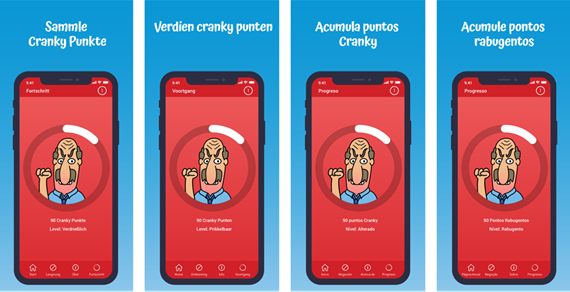 But compared to some other head-scratchers this was quite an easy task, solvable with the help of online dictionaries and thesauruses! Working through the different texts in need of translation we soon had a “nice” list of questions to be discussed:

Some fallacies didn’t have a 1:1 translation but used a different term requiring a new icon. A prime example for this is “cherry picking” in English which is raisin picking in German. Or “red herring” in English which is a “false trail” in German. Luckily enough, these mis-matches had already come up earlier so John had already created alternative icons for both, which we could use as replacements in the game. 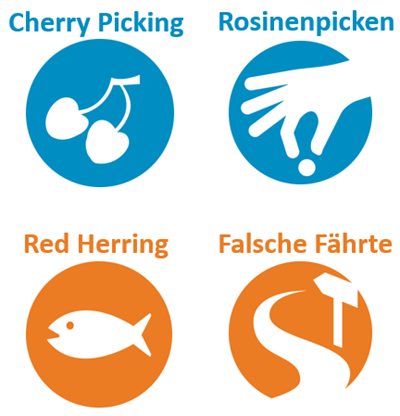 The really hard to resolve issues were those related to the ‘Ambiguity’ fallacy where one word has different meanings for scientists and lay people which then gets exploited by science deniers. Not all are as easy as the word “theory” which translates 1:1 into other languages and also has the same meaning scientifically on the one hand and in everyday language on the other.

Some ambiguities were a lot more tricky and couldn’t be resolved this easily via a verbatim translation, though. The reason is, that the ambiguity present in the English text is often completely lost if the translation ends up with different words for what is the same term in English. In these cases, the question for the translator teams was whether they could come up with good alternatives in their respective languages which then also fitted the cartoon. This entailed quite some back-and-forth and we were sometimes on the brink of discarding the quiz question completely for the translated version of the game. Eventually, creativity prevailed and we were able to come up with good solutions, as the example below illustrates.

Problem solved for all thus far published languages and we hope that we can keep it this way for the next languages soon to be launched. Speaking of which: The teams tackling Italian, French and Swedish have already completed or just started proofreading and testing their translations as this blog post goes live!

The game is freely available on iPhones, Androids, and browsers via the links below where you can then select one of the available languages to play it in. If you already played V1 of the game in English on your device, you’ll need to start from scratch by first deleting your account in the settings and then selecting another language. The browser version looks best if you resize the screen to mimic a smartphone in portrait mode.

If you’d like to provide feedback about the Cranky Uncle game, please fill out this short Google form.

Happy playing and getting ever crankier!

Even though the translations of the Cranky Uncle game are done by teams of volunteers, each language incurs costs for programming activities to get a language set up in the game. If you’d like to support Cranky Uncle “teaching” his science denial techniques in other languages, please use the dedicated page to contribute.