DARIUS Campbell Danesh’s may have to wait two months before finding out the cause of his death.

On Tuesday it was revealed that the star – who is best known for his stint on Pop Idol in 2001 – was found dead in his US apartment on August 11.

The apartment that Scotsman Darius was living in the Berkman apartments, opposite the Mayo Clinic specialist treatment centre in Rochester, Minnesota.

It is unknown if he was attending the facility for treatment as those who live in the apartments often work or are getting treated at the clinic.

Rochester police have there were ‘no signs of intent or suspicious circumstances’, but Darius’ family could have to wait up to eight weeks before finding out the toxicology results.

The Mayo Clinic specialist treatment centre has been looking after patients from all over the world for over 100 years. 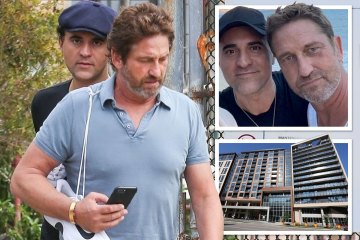 It has different departments and centres to cater for patient’s needs, including a breast clinic, critical care, emergency medicine, women’s health and many more.

After the news of Darius’ devastating death aged 41, tributes for the singer soon came flooding in, with the likes of Simon Cowell and Gareth Gates paying their respects.

Many fans will have his iconic audition of Britney Spears’ Baby One More Time for a role on Popstars to look back on.

The last picture of Darius – taken on June 9 – before his tragic death was him out with Hollywood actor Gerard Butler.

US cops have said there are no suspicious circumstances.

The singer had escaped death previously after being involved in a car crash in Spain and slipping into a coma after contracting meningitis when he drank water from the Thames.

A statement released by his family read: “It is with great sadness that we announce the passing of Darius Campbell Danesh.

“Darius was found unresponsive in bed in his apartment room in Rochester, Minnesota, on August 11 and was pronounced dead in the afternoon by the local medical examiners’ office.

“The local police department have confirmed that there were no signs of intent or suspicious circumstances.

“The cause of his sudden death is unknown at this stage while medical examinations continue.

“We ask that you kindly respect our wishes for privacy at this time whilst we come to terms with the tragic loss of our son and brother.”