Brent Simon has returned back from the Venice Film Festival with this glorious Don’t Worry Darling review. 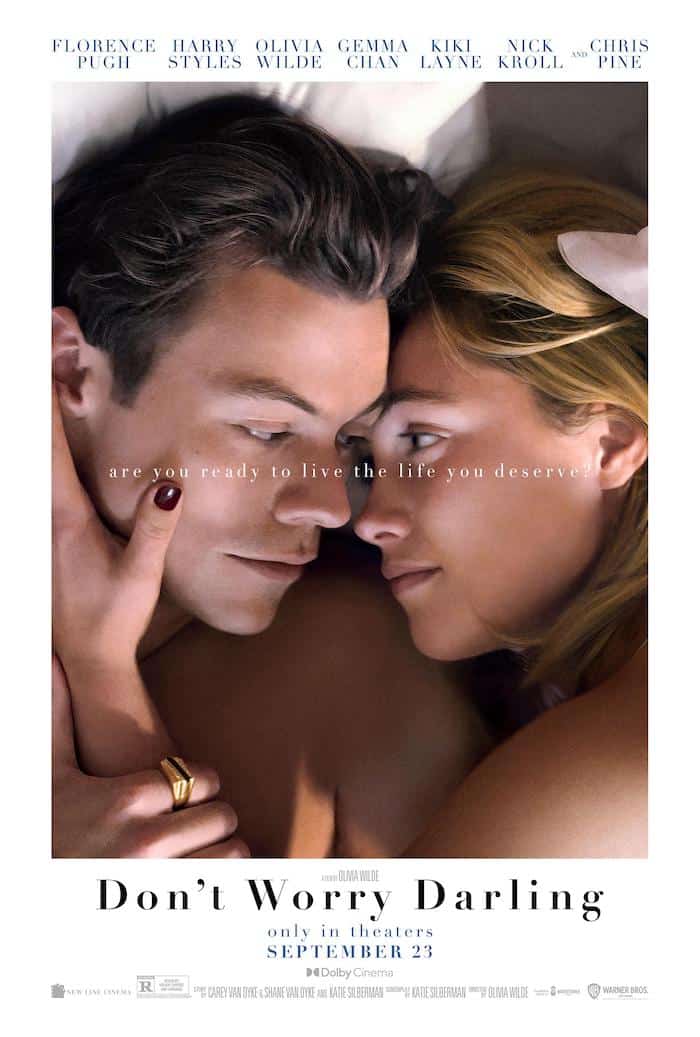 If one permits a brief introductory sidebar, we have already seen the imperilling effects of social media on the course of human history — both by way of an ill-informed, mentally unstable demagogue (and arguably much worse) elevated to the American presidency through use of his amplified platform, as well as the more general trend of corrosive and damaging misinformation pumped out across various sectors. The human brain is an incredible instrument, no doubt. But world events seem to be telling us that it isn’t wired for the type of constant hive connectivity which is a byproduct of social media.

This is all worth mentioning and considering with regards to Don’t Worry Darling, the new film starring Florence Pugh and pop star Harry Styles, because various online kerfuffles have, over the last couple weeks, utterly consumed the movie’s publicity campaign in advance of its recent premiere at the Venice Film Festival.

These stories have ended up pitting — in the minds of various super-fans and proxy foot soldiers — director against star, cast members against one another, and its lead against an actor at one point attached to the movie but who doesn’t actually even appear in it. It’s lesser stakes, certainly, all this drama. But it’s also a sign that the truth about a situation — almost any situation — is now only a single component of its larger reality.

Almost from the moment the film’s first press screening ended, hours in advance of its official evening premiere, some knives came out. With Don’t Worry Darling, the truth (it’s a flawed and at times inert film that doesn’t explore its themes as meaningfully as it seems to believe it does) seemingly became secondary to a more sporting dissection of the movie as “A Failure.” (Meanwhile, a secondary and highly reactionary wave of “social-defense” reviews, lambasting early-breaking negative notices — not always incorrectly — as emptily misogynistic, have attempted to provide course correction.)

The movie’s story centers on Jack (Styles) and Alice Chambers (Pugh), a young married couple who live in a seemingly idyllic California desert community. Jack, along with every other male neighbor, works on a top secret program, known only as “The Victory Project,” that may or may not have military or national security implications. Alice, meanwhile, tends to domestic duties, and spends time relaxing with her friend Bunny (Wilde).

The founder and boss of the Victory Project is Frank (Chris Pine), who rules over this burgh in faintly cult-ish fashion with his wife Shelley (Gemma Chan), tightly prescribing the movements of his employees and their families. When Margaret (KiKi Layne) becomes distraught and even tries to harm herself, Alice begins to question what exactly Jack’s work involves, and whether its costs are too high to bear. She sees what she believes is a plane crash, and soon finds herself gripped by hallucinations and brief periods of catatonia. Making breakfast, she discovers eggs which have no yolks. Speaking out on these elements and incidents brings Alice into more direct conflict with Frank, and causes friction in her relationship with Jack.

Take a moment from this Don’t Worry Darling review to check out the official trailer below:

Scripted by Wilde’s Booksmart collaborator Katie Silberman (though adapted from a separate 2019 Black List-tabbed screenplay by brothers Carey and Shane Van Dyke), Don’t Worry Darling has the look and feel, especially early on, of something with more substance, and deeper currents — of a psychological thriller plugged into both character and perhaps trenchant commentary. The over-the-top lustiness of Alice and Jack’s relationship stands in counterpoint to their neighbors, and the movie teases out a potential trajectory as something between an updated spin on The Stepford Wives and a horror-mystery-thriller.

This ultimately turns out to be little more than a sheen, however. Cinematographer Matthew Libatique leads the list of contributions in solid below-the-line craftsmanship, helping to frame and capture scenes in a manner which allows for disquiet to build in the background. Wilde adds in a couple flourishes which portend the apex of Alice’s mental break (inserts of rushing color injections, for example), though these seem to be mostly derivative in nature — the type of thing one might expect to see in music videos from the 1990s and early 2000s.

Don’t Worry Darling mostly goes off track on a narrative level by way of pacing. The film sets up a basic “Garden of Eden” conceit (residents can’t leave a certain area), and then offers forth no immediate consequences when this tenet is violated. Jack knows certain things about his wife’s behaviour but not other elements. The movie becomes tedious, and builds to a ludicrous dinner scene in which Alice and Frank have an argument and the latter makes a charged accusation, in mixed company, which is never addressed by other parties. In its home stretch, Don’t Worry Darling dives headlong into action (there’s a chase sequence, though it feels bewilderingly low stakes) in a way that isn’t strongly set up, and doesn’t have clearly delineated consequences.

Simply put, Wilde’s movie doesn’t have a strongly moored interior logic. Its script, which wants to tackle issues of gaslighting and female subservience, instead engages with these themes in a willful and heavy-handed fashion, flowing from offscreen intent of artistic statement rather than choices that make sense within the story. The revelation and resolution of its core mystery is deflating rather than exhilarating or satisfying.

This is mitigated a bit by the performance of Pugh, who evidences a strongly controlled sense of scene-to-scene emotional curiosity and uncertainty that belies her years. Styles, meanwhile, in his highest-profile screen turn to date, isn’t without talent. In fact, he exudes an easygoing charm. But most of his choices are surface ones, and fail to help give Jack any sense of convincing depth — a problem which becomes more acute in the movie’s final reel.

Despite the participation of talented individuals, and its collection of intriguing component parts, Don’t Worry Darling is a misfire, plain and simple — an intriguing failure. Of course, social media will tell you plenty of other stories.

Glass Onion Review: “A film with layers, but none I necessarily feel like peeling back”