Thanks to Hallowscream for inviting us down to bring you an always honest Hallowscream York Maze 2022 review. 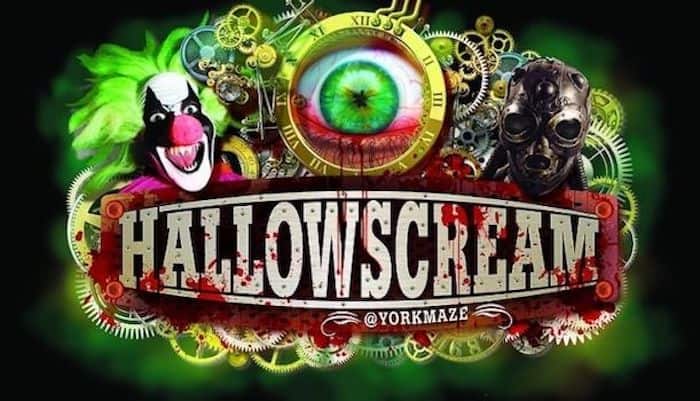 This was my first ever visit to Hallowscream and already the scale of the event makes itself known the second you pass through the main entrance.

What presented itself was a vast open space and lots of undercover areas to hide in during a rainy day.

With 5 mazes on offer, I had heard good things about the quality and duration of the mazes and I have to agree. Hallowscream has some of the longest mazes I’ve walked through with one, in particular, taking 12 minutes to navigate. That’s insane for a scare maze.

Two stages showed a variety of shows including a dance show and a freak show involving nail beds, singing devils, fire eaters and more in this wacky and wonderful display.

With the event being quite large in size I did find it difficult to contain the atmosphere from one place to another. Inside the tents, the freak show had a nice atmosphere but at the other end of the park by a host of funfair rides, it was dead. No actors of note and nothing really immersive or Halloween of note down that end.

It’s when you come closer to the large tents (and even inside them) that the atmosphere ramps up with all the mazes located in one central area.

I watched a video of the light and fire show last season and it was on a much grander scale than the show we witnessed during our visit. I was hoping that the mazes weren’t treated with the same scaled-down production.

Thankfully out of the 5 mazes only 2 weren’t up to the standard that I was expecting but this wasn’t down to their design it was down to the lack of actors within them.

One particular maze had us wandering through an empty maze with no scares of note and it was a little disappointing. Then in sheer contrast to that, the strongest maze of the evening ‘The Singularity’ was packed through with actors on their A-game weaving this wonderful story.

With many scare events, the number of actors within each maze varies just like each run-through varies for individual guests. One group could have a wonderful run-through full of scares and the next it could be empty with no one around. It really is luck of the draw.

One apocalyptic maze consisted of an ambulance, fire truck, oil truck, army truck, and combine harvester and still had no actors around it to immerse you in the grand set pieces they had set up. This was a real shame.

The use of 3D glasses in the Barnaggedon 3D maze was the first time I had experienced a maze with glasses on. This 3D wonderland transformed into a UV-painted trip from start to finish. It truly was an immersive and wonderful experience and provided a unique and wonderful walkthrough.

Mazes such as 2073 that go on for a ridiculous amount of time needed the actors within them to deliver the scares.

With great set pieces, a nice range of shows and a good atmosphere I rather enjoyed Hallowscream.