HEAVYWEIGHT king Tyson Fury could soon be washed out by life at home – despite retiring fresh and early.

Wife Paris gleefully posted a clip of Fury pressure-washing their driveway as she boasted: “If Carlsberg made husbands…”

The unbeaten Gypsy King, 34, insists he won’t fight again, despite teasing a third clash with Dereck Chisora or a unification bout with the winner of Anthony Joshua’s revenge bid against Oleksandr Usyk.

But he’s keeping fit – and not just in the gym.

Fury appeared not to notice as Paris filmed him in lounge-style T-shirt and shorts cleaning the tiles out front at their £550,000 home in Morecambe.

Sharing the video on her Instagram story, she can be heard chuckling: “It looks like I bought him in to graft. 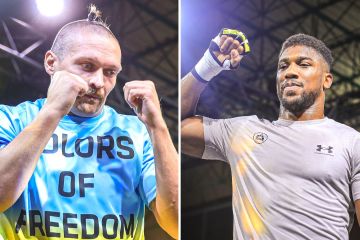 And she teased him again in the words below, as she wrote: “Tyson Fury living his best life today under my observation” – followed by crying-with-laughter emojis.

It shows once more how Paris has been lapping up Tyson’s normal life since his apparent decision to step away from the top of boxing.

Earlier this week she responded to him posting a clip of his kids-style, dinosaur-shaped fun food.

He captioned it: “Welcome to retirement, Paris.

“Turkey dinosaurs and chips, one of my favourite meals in the world. Get up there my boy, get up!”

Paris snapped back quicker than a hungry Tyrannosaurus Rex, with: “Oh dordy” – next to an emoji of hands covering a face.

She clearly has him raptor around her little finger!