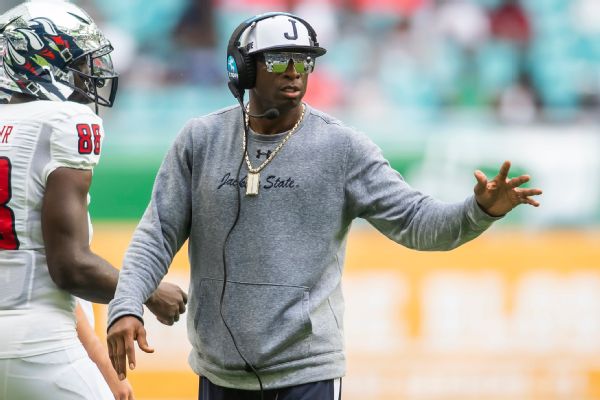 Jackson State football coach Deion Sanders on Tuesday said in an Instagram video that his program and players are now “in crisis mode” when it comes to grappling with the multiple water problems that have afflicted Mississippi’s capital city in the past week.

Parts of Jackson were without running water Tuesday because flooding exacerbated longstanding problems in one of two water-treatment plants. The city of 150,000 had already been under a boil-water notice for a month because the Health Department found cloudy water that could cause digestive problems. Now, residents are also faced with too much water on the ground after the heavy rainfall in the past week, and not enough safe water coming through the pipes for people to use.

Jackson State University brought in temporary restrooms for students, and Sanders said the water crisis has left his players without drinking water and unable to flush toilets or take showers at their practice facility. In the Instagram video, Sanders — also known as Coach Prime — said he wanted to move players into a hotel so they could shower.

“I got to get these kids off campus … into a hotel and accomodate them so that they can shower properly and take care of their needs, make sure all our kids are fed, and all our kids have the necessities of life for the next several days until this crisis subsides,” Sanders said. “That’s where we’re operating in right now.”

Mississippi Gov. Tate Reeves said late Monday that he’s declaring a state of emergency for Jackson’s water system, and he issued the proclamation Tuesday. The state will try to help resolve problems by hiring contractors to work at the treatment plant, which was operating at diminished capacity with backup pumps after the main pumps failed “some time ago,” Reeves said.

Sanders expressed confidence his players and program will show their resilience and persevere despite these challenges.