Jeremy Clarkson has boasted that he ‘got a C and two Us’ in his A-levels and is ‘currently holidaying on this boat’ in his annual tweet to students who are disappointed with their results today.

The total number of students accepted onto degree courses in Britain has fallen by two per cent on the same point last year – with 425,830 taking up places so far, initial figures from admissions service UCAS have revealed today.

But the former Top Gear presenter, 62, has taken a swipe at the importance of the results by tweeting a picture of himself on a boat looking out to sea to his 7.8million followers.

He said this morning: ‘Don’t worry if your A level results are disappointing. I got a C and 2 Us and I’m currently holidaying on this boat.’

Clarkson’s tweets on A-Levels results day have become a regular fixture, boasting last year that he has ‘loads of friends’ despite failing his exams. 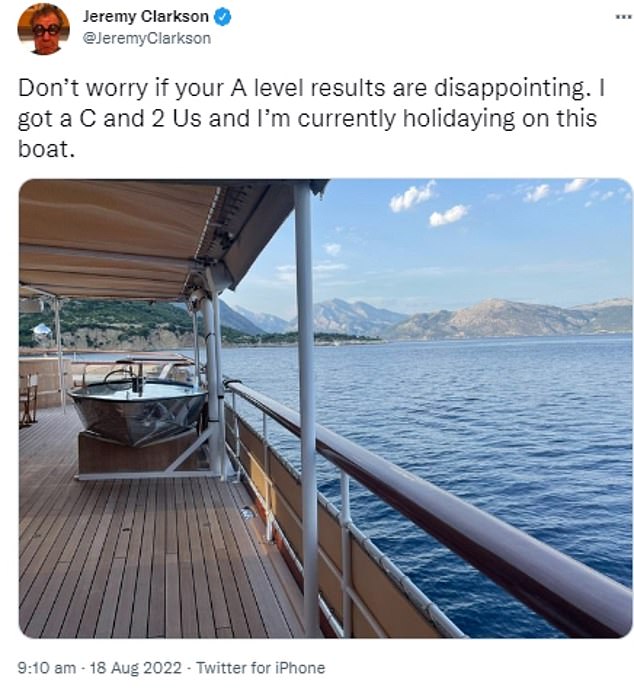 The former Top Gear presenter, 62, today took another swipe at the importance of the results by tweeting a picture of himself on a boa 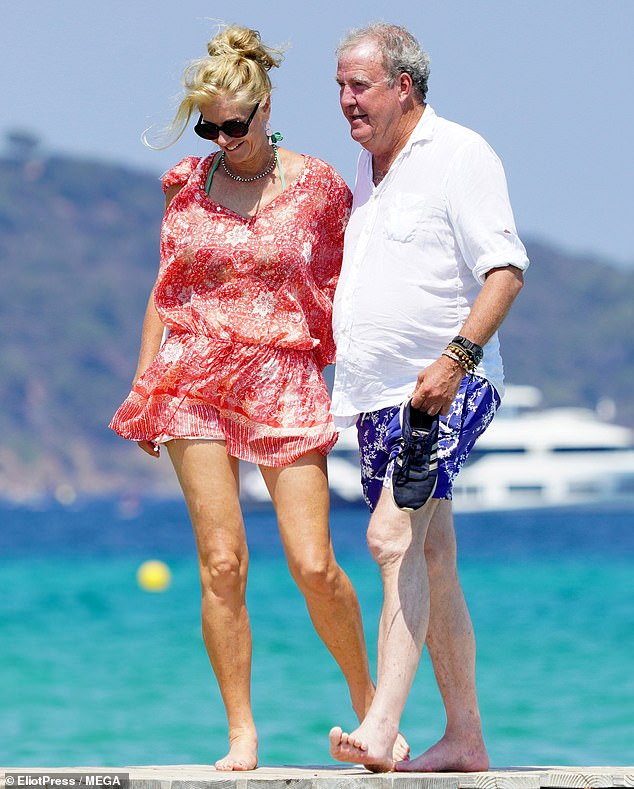 Clarkson (right) and his wife arrive at the Club 55 during a holiday in St-Tropez, France, on July 21 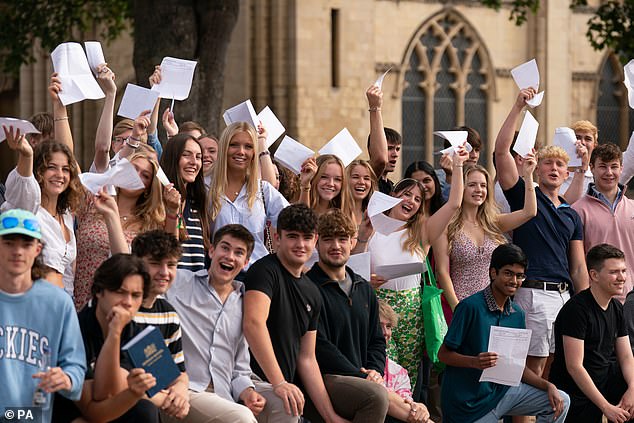 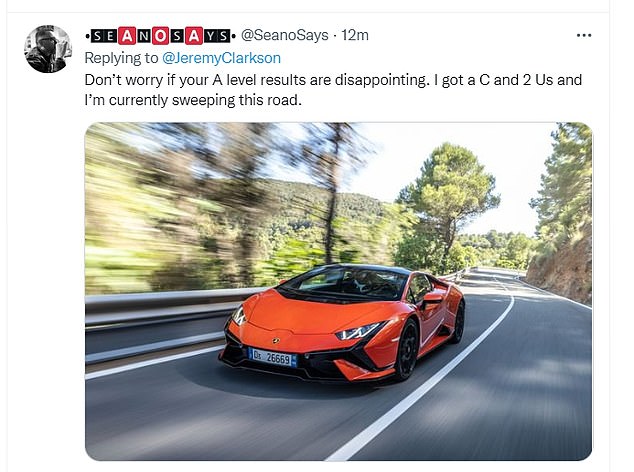 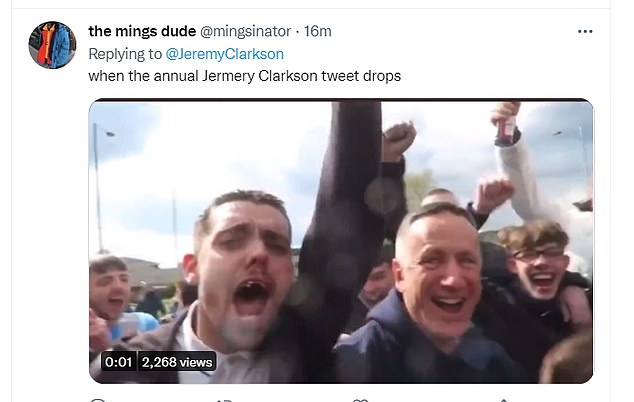 While some welcomed Clarkson’s A-level tweet this morning, others were less keen on its sentiments

One said: ‘To everyone coming in to make the same tired jokes as every year: who does this tweet hurt?

‘Because I can tell you it’s probably quite comforting to a 17/18 year old who’s just found out they haven’t got into their dream university.’

Another added: ‘Another year, another Clarkson tweet. What a time to be alive.’

A third said: ‘Jeremy Clarkson keeping it real! It’s so true! I don’t even have a-levels and I’ve got an amazing job that I totally love.’

And a fourth wrote: ‘Death, taxes and Jeremy Clarkson’s A level results tweet.’

But some were quick to show they were less keen on the sentiment of today’s tweet.

One said: ‘I wanted to be a fighter pilot when I was 17, but guess what? I didn’t work hard enought at school to get the qualifications.

‘My fault, nobody else’s. So I settled to being a chef, long hours, poor pay working in rubbish conditions. So boo hoo. Study harder, to get good grades.’

A second replied: ‘Remind us again of the deprived area you lived in and the state school you went to?’

A third said: ‘Smug Monster Jeremy Clarkson wheels out his annual tweet about his A levels.’ 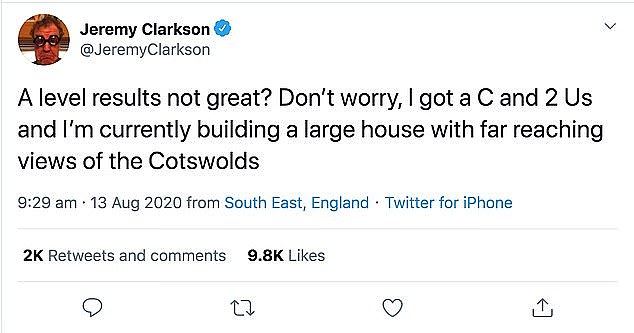 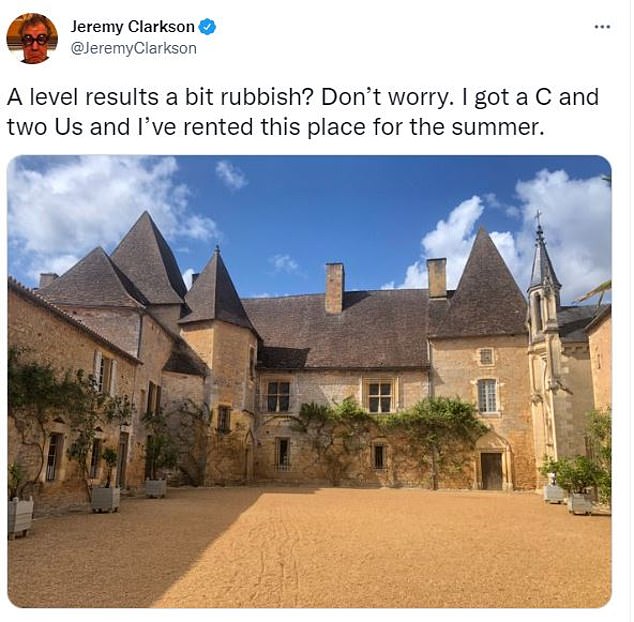 As students received their results this time last year, Clarkson wrote: ‘If the teachers didn’t give you the A level results you were hoping for, don’t worry. I got a C and 2Us and I’ve ended up happy, with loads of friends and a Bentley.’

And as students got their results amid the Covid pandemic in 2020, he said: ‘A level results not great? Don’t worry, I got a C and 2 Us and I’m currently building a large house with far reaching views of the Cotswolds.’

He added: ‘And I didn’t even get the chance to insist the government gave me three As instead.’

The annual tweet stretched back to August 2014, when Clarkson said: ‘If your A level results aren’t joyous take comfort from the fact I got a C and two Us. And I have a Mercedes Benz.’

His remarks come as Ucas has already said that, while it expects record or near-record numbers of students to get onto their first-choice courses this year, the process will not be ‘pain-free’ for all because some students will be left disappointed.

And A-level pupils face devastation this morning as top grades take the biggest plunge ever registered in the 70-year history of the qualification – with a record 80,000 fewer entries awarded A or A* compared with last year.

Officials have reined in grade inflation by introducing harsher marking for sixth formers across the country, who will pick up their results after becoming the first year group to sit exams since the pandemic began.

The number of students anxiously waiting to see if they have a university place has soared by 40 per cent since 2019, with almost 300,000 still having no idea whether they will get the course of their choice – a record high.

The number of pupils with no offer of a place at all has also increased by 74 per cent in the same period, to just under 28,000, according to new figures from dataHE.

The increase has been fuelled by a population boom and a reduction in unconditional offers, making this year’s scramble for places the most competitive ever.