Kawhi Leonard off bench in LA Clippers’ win over Lakers 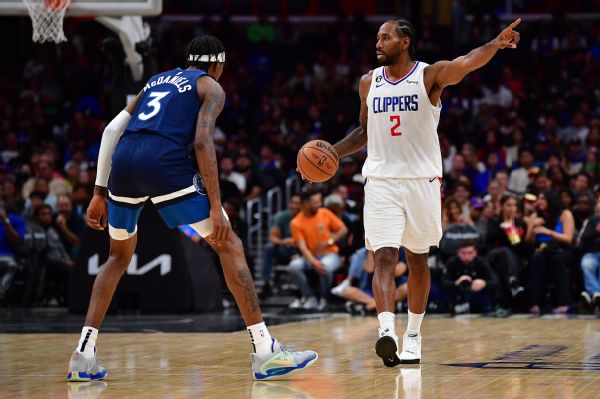 LOS ANGELES — After missing all of last season, Kawhi Leonard opted to wait a little longer before making his much-anticipated return for the LA Clippers.

For the first time with the team, Leonard decided not to start in order to maximize his limited minutes. He ended up finishing the game as the Clippers beat the Los Angeles Lakers once again. Leonard scored 14 points, including a 21-foot jumper with 52.3 seconds remaining to help seal a 103-97 win at Crypto.com Arena.

The Clippers beat their hallway rival for the eighth straight time despite their franchise player not checking into the game until the 6:25 mark in the second quarter and playing three stints that totaled 21 minutes.

“It was long,” Leonard said of his wait to come into the game. “But I waited 82 games last year, so I didn’t think 15 minutes would be that long.”

In his first game back since tearing his right ACL in Game 4 of the second round against the Utah Jazz on June 14, 2021, Leonard was a reserve for the first time since November 2013, when he was with the San Antonio Spurs.

Leonard said he made the decision to not start after going over data and running simulations in practice with him starting and subbing in. Leonard and the Clippers’ goal is for him to stay healthy and be at his strongest for the postseason with the team expected to contend for a championship. They want to maximize his minutes as he works his way back, and have him play those minutes during the most impactful stretches and finish the game.

“One scenario with me starting, I would have been sitting like 35 minutes real time,” Leonard said of starting and still being able to finish the game. “That’s way too long. So I just thought this was the best situation. But we’ll see how it goes moving forward.”

Leonard didn’t waste any time once he finally got back on the floor. He buried his first two shots, both from midrange, where he so often likes to operate.

“First [Leonard] got the rebound, went coast-to-coast and hit his little patented fadeaway,” said John Wall, who hit 7 of 15 shots and scored 15 points in 24 minutes in his first game since April 23, 2021. “It’s all about rhythm and pace for him.

“He’s a guy that’s like a machine and he works on his stuff, he sticks with what he wants to. And he basically treats it like a workout. Like he doesn’t see anybody in front of him. It’s all about him missing or making a shot.”

Leonard didn’t have his rhythm from 3-point range, where he shot 1-for-4. But he made some pivotal plays, drawing a charge off LeBron James late in the fourth and knocking in that jumper with under a minute to go to give the Clippers a six-point cushion after the Lakers erased a 15-point, second-half deficit.

“I did this before,” Leonard said of coming off the bench. “This is how I started my career. That’s how I approached it mentally. Act like I was in foul trouble, and once I check in the second quarter, it’s time to play basketball.”

Leonard acknowledged that he likely will not play in at least one of this weekend’s back-to-back games at Sacramento and then at home against Phoenix.

“You gotta gradually play minutes in order to get the ACL strong,” Leonard said. “Once you start playing 38 minutes first game, it could easily weaken up, but I’m listening to the doctor with that.

As for how long he plans on coming off the bench, Leonard said he likely needs to see his minutes increase back to around the 34.1 minutes he averaged in 2020-21.

“It’s all about how my knee responds,” Leonard said. “We’ll see how it feels tomorrow and then gradually go as time goes forward and I’ll start adding minutes and once I’m ready to play 35 minutes — I think I played 33 minutes when I was healthy — that’s probably when you’ll see me starting.”