Now streaming on Peacock we bring you our thoughts on this depressingly beautiful movie with our Meet Cute review. 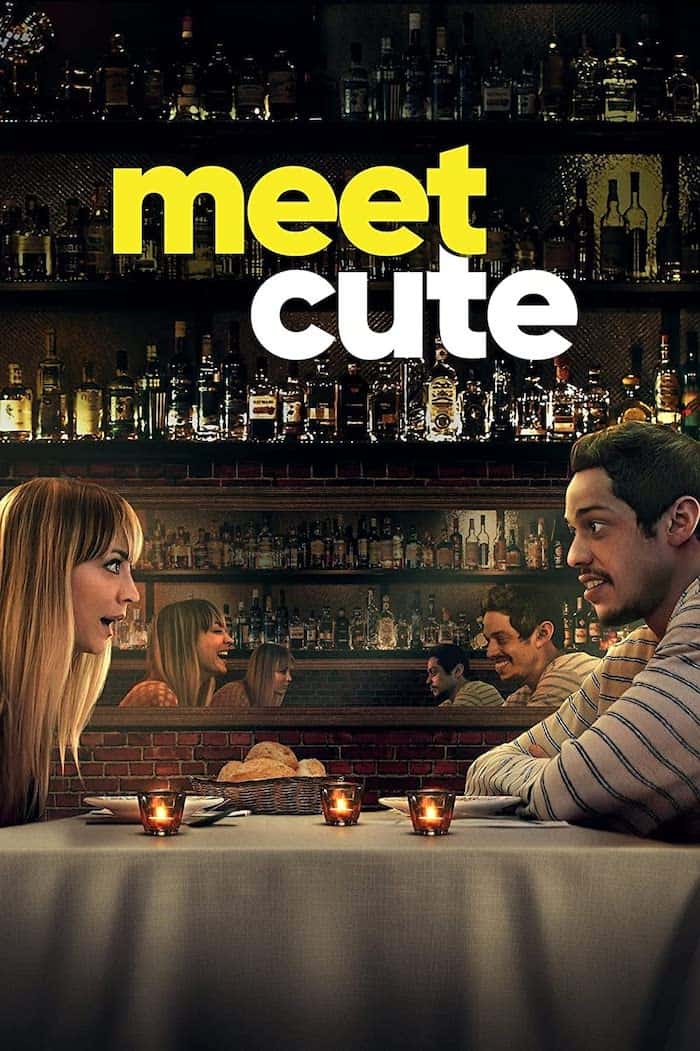 Sheila, a young woman grappling with suicidal thoughts, discovers that a tanning bed in a nail salon is a time machine. Traveling back 24 hours, she relives the best date night of her life over and over, only to decide that her boyfriend, Gary, needs some fixing. Unaware that meddling with the past could ruin the future, Sheila goes even further back in time to turn him into the perfect man — even though he was already pretty perfect.

Meet Cute has a strange title considering the way in which Sheila (Kaley Cuoco) and Gary (Pete Davidson) is never by chance. Shelia is a time traveller who on the day of wanting to kill herself travels back 24 hours in time where she meets Gary and for one night, everything is perfect.

In an attempt to preserve this happiness, Sheila keeps travelling back in time over and over and over to relive the date for eternity so she can hold onto this feeling forever.

Meet Cute has a quite hauntingly beautiful story to it that flickers throughout but with some messy time travel segments thrown in there, it at times becomes confusing but it doesn’t overshadow the beating heart of this feature that pounds throughout.

I always find that Pete Davidson plays the same character in every movie that I’ve personally seen him in and once again we have another dialled-in clumsy and awkward performance that seems copy and paste from many of Pete’s previous films. This man is successful with some of the world’s most beautiful women and my clumsy and awkward ass is sitting here wondering where I went wrong.

Sheila’s mental illness isn’t explored enough in meet cute as her suicidal thoughts are more front and centre of this particular film than exploring anything that led her up to this moment. There are hints of borderline personality disorder scattered throughout but never explored and this particular storyline hit home on a personal note with me due to a previous relationship of mine being scarily close to how this particular film plays out.

Whilst completely unhinged it’s depressingly beautiful to know that someone cares about you that much to go back in time and relive the first date over and over again if albeit for the selfish reasons of feeling something when all hope was lost. Relying on this one first date forever in eternity to fuel a happiness but never wanting to go further out of fear that it’ll all go wrong and this perfect date would be ruined.

After a whole year of time travel Sheila gets bored with the same Gary over and over and goes back even further in time to try and change him and ‘tweak’ a few things. Just typical as every woman in the world has her heart set on changing her man, if they could, they would right?

But after too much tweaking Sheila realises that just plain old regular Gary is more than enough for her. There’s a little twist at the end but with how laser-focused the film has been on Sheila not wanting to continue living, let alone reliving the same day over and over the ending was a little forced.

Whilst this film does drop the ball and here it’s rather charming, entertaining and smart in its delivery to stand out against other time travel-type movies.

I rather enjoyed the fact that no matter what Sheila said, how irrational she acted when she’s telling him she loves him (after just one night in Gary’s eyes as opposed to the months/years in Sheila’s relived date night) that they always seem to have a good night before going their separate ways. It doesn’t matter what she says or does, they always share a magical night together further proving that Gary is the stand-up decent guy that stays consistently noble throughout.

Cuoco delivers an absurdly crazy yet almost endearing performance as despite her selfish rationale there’s something quite romantic about her wanting to relive her perfect date night over and over. I can think of one date I’d love to relive over and over again before things went south, this one perfect moment frozen in time that will never fail to make you happy despite the ways in which it could be played out.

Love is messy and unpredictable it’s not the case of simply hitting a reset button and reliving the good times and these motives are unearthed as the film comes to a conclusion.

Meet Cute is beautifully depressing and for its faults, it deserves to be seen, enjoyed and appreciated.