Nick Clement brings us his thoughts on the brand new Alex Garland feature with this Men movie review. 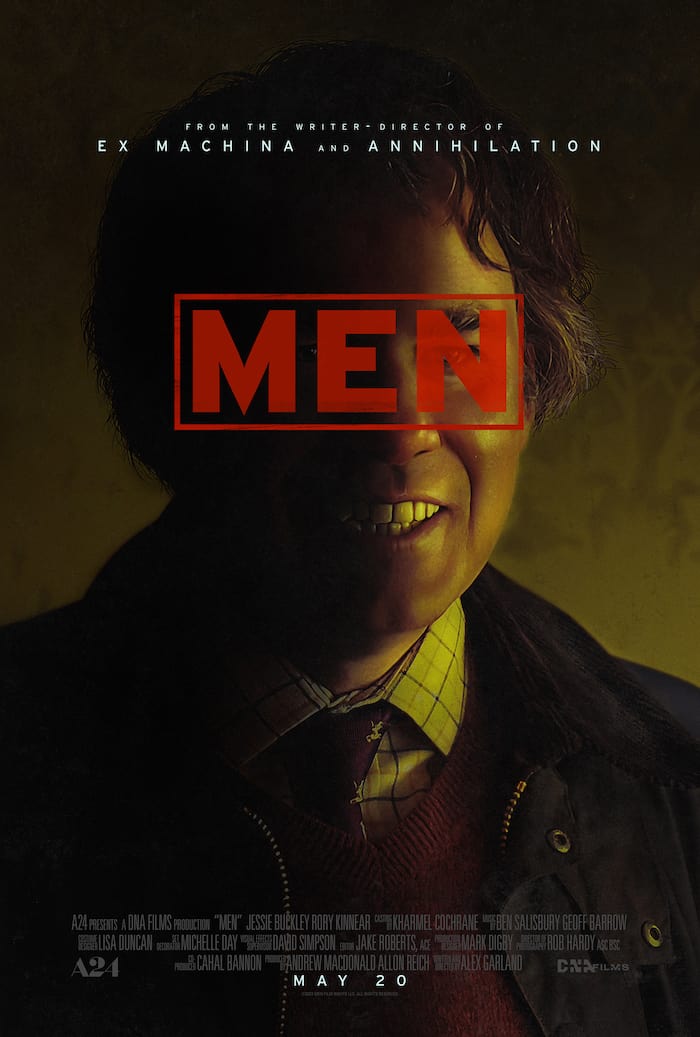 Harper retreats to the countryside to be alone in the wake of a tragedy, but her unease at the town’s leering and uncannily similar men grows into a fully fledged nightmare as her arrival awakens something primal in the forest

Along comes the brilliant Alex Garland and his wild masterpiece, Men, and now my top 10 for 2022 is all messed up, but that’s what happens when you’re subjected to a film that completely and utterly knocks your fuckin’ socks off.

The fact that the great Jessie Buckley won’t be Oscar-nominated for her towering performance is tantamount to Crimes Against Cinema, but no matter, she knows what she did, and if you’ve seen this startling psychological horror thriller (huge Nicolas Roeg shades all over this one), you know what she accomplished.

In picture after picture, this actress has excelled at the highest limits (Beast, Wild Rose, I’m Thinking of Ending Things, The Lost Daughter); she’s truly an on-screen talent to be excited for in the future. The hilariously loaded title is only the tip of the thematic iceberg here, and while the film certainly operates as a timely comment about cycles of abuse, it also serves as a multilayered and devastating portrait of grief and inner personal anguish. And because the always cerebrally-minded Garland approaches the narrative with a tripped-out sensibility, all matter of time and place are thrown out the window, which creates a dazzling, head-scrambling experience.

I’ll never look at the fabulous British actor Rory Kinnear in the same way ever again. He plays at least six characters and does them all with devilish glee, and it must be said – he went all in/all out – leaving nothing to the imagination in more than one respect. The story hinges on a mentally damaged young woman (Buckley) who heads out to the English countryside for a weekend of solace, after her husband, with whom she was on the verge of a divorce with, has just committed suicide. Upon arrival at a gorgeous and secluded estate, things start to get strange almost immediately, with Garland capturing an ominous mood and impending dread atmosphere almost better than anyone with the exception of Fincher.

She meets the odd but seemingly helpful housekeeper (Kinnear), and then things get weird, and weirder, and, well, you’ll just have to see the film as I’m not going to spoil any of it. The unease that Kinnear brings to every role he took on in this movie is uncanny, and the idea to have every man in this small town all look eerily similar is a wonderful creative stroke.

And then arrives the last 10 minutes, which are likely to serve as a cinematic litmus test for many viewers, in terms of what they are willing to watch with their own two eyes on a movie or television screen. I can only imagine the response the final shot engendered from some opening weekend audiences – ha!

I couldn’t believe what I was watching – horrifying, absurd, grotesque, and with all of the insanity deeply tied to the inner core of the narrative. There’s some nightmare-fuel imagery on display towards the end that will take your breath away (my wife and I sat on our couch slack-jawed), all of which has been vividly photographed by the stylish cinematographer Rob Hardy, who exudes total control of his pristinely calibrated visuals.

The photo-real CGI effects only add further polish to the proceedings, with an almost hallucinatory level of intensity to be felt at certain points; it’ll be too much for some, but will freak others out in the best possible way.

I couldn’t sleep last night after viewing this movie, and I’ll be thinking about it over the next few days for sure, especially Buckley’s wowser of a performance, and that final scene.