Netflix’s Wednesday directed by Tim Burton has been an absolute hit instantly rising to the #1 Netflix show spot and flying past its competition. A show packed full of mystery, intrigue and lots of Wednesday easter eggs that throwback to the TV show and more, did you spot them all? 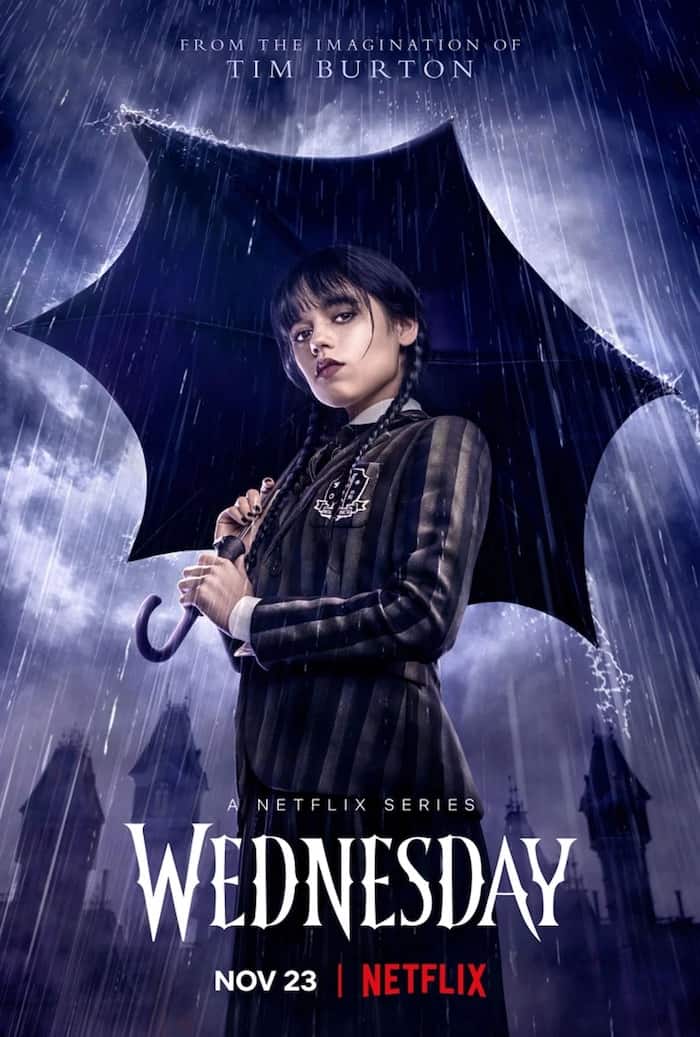 Wednesday feels like a mix of all the films that I grew up watching, it’s a mix of Harry Potter, Twilight and Teen Wolf thrown into a blender with a gothic Sherlock Holmes twist.

The creators wanted to avoid a Harry Potter feel but it just can’t be helped. A school full of outcasts with powers, secret corridors and puzzles, a young socially awkward outcast navigating this new chapter of her life, it’s all there in black and white and I’m not just talking about Wednesday’s face.

Some of the following easter eggs may spoil certain sections of the show so if you haven’t seen the first season already then, what are you doing with your lives? Seriously.

Jokes aside, get it watched and then come back here and see if you spotted any of these Wednesday easter eggs!

Wednesday wasn’t conceived on a Wednesday.

In the first episode, Morticia explains Wednesday’s name comes from a nursery rhyme where one line reads ‘Wednesday’s child is full of woe.”

Creator Charles Addams didn’t give the characters names when he first created them but he sourced names over time and got the inspiration for Wednesday’s name from that very nursery rhyme.

Whilst Carolyn Jones doesn’t appear in Wednesday her character’s name Ophelia (Morticia’s sister) is the name of the form that Wednesday is staying in.

A birthday party for Wednesday is shown in a flashback and the spiders are shown to crawl all over her.

In the 1964 TV series The Addams Family Wednesday had a pet spider named Homer.

Although Homer doesn’t make an appearance her love of unique creatures is shown in a moment between herself and Enid as Wednesday mentions that she had a pet scorpion, Nero, when she was 6 years old who was killed when a group of boys bullied her.

Jericho’s town sheriff makes a Scooby-Doo reference which goes back to The New Scooby-Doo Movies featuring the Addams Family in a crossover episode in 1972.

In the original crossover episode from the 1972 series, titled “Wednesday Is Missing”, Gomez and Morticia go on a second honeymoon, leaving the mystery-solving group to house-sit.

A mysterious passageway is unlocked within this school of witchcraft and wizardry (whoops, wrong pop culture phenomenon).

Wednesday solves a mystery to unlock a secret passageway to the Night Shades’, a society that was sworn to protect Nevermore (the school that houses the outcasts) against the normies (humans) which has now turned into nothing more than a social club.

In order to gain access to the passageway you must snap your fingers twice to enter.

The snaps come from the infamous Addams Family theme tune which features the famous clicks.

Christina Ricci who played Wednesday in the 1991 film also features in Wednesday as Nevermore’s first normie teacher. She also clicks her fingers twice to gain access to the passageway as a little throwback to her time in the original Wednesday role.

Whilst Cousin IT doesn’t make an appearance in person he does make a quick cameo in the basement of the Night Shades’ meeting place.

On the wall is a portrait of Ignatius Itt with his blonde hair, bowler hat and sunglasses.

In Wednesday, the town of Jericho is focused on Pilgrims with various pieces of preserved history making up the town as quite the tourist attraction.

Naturally, Wednesday does not approve and it’s not the first time.

In the 1993 movie Addams Family Values Wednesday takes a stand against the celebration of pilgrims. She does this by burning down the camp she’s been sent to during a Thanksgiving Play.

“I could eat Girl Scouts for breakfast” Wednesday says in episode three referring to the 1991 movie The Addams Family where Wednesday’s lemonade is questioned regarding its contents. In reply, Wednesday asks a girl scout if the cookies she’s selling are made of real girl scouts.

It’s not just Addams Family movies that Wednesday pays tribute to with a particular Ravens Ball scene raining red paint from the ceiling in a tribute moment to the movie Carrie to which Wednesday comments “They didn’t even use real pigs blood” referring to the movie where Carrie is covered in pigs blood as opposed to the red paint that is used at the ball.

Whilst Wednesday has some amazing skills under her belt including fencing and street fighting skills she has to have a go at an extracurricular activity and she ends up at the archery field. Naturally, she’s a pro but this isn’t the first time she’s done it, that’s why.

Her archery skills are a subtle nod to the 1993 film Addams Family Values. In the movie, Wednesday and her brother Pugsley are practising archery.

Look closely at the background of the shots on the walls of the Weathervane coffee shop and you’ll see Tim Burton’s CV.

Each Weathervane has a reference to a Tim Burton movie including Sleepy Hollow and Charlie and The Chocolate Factory.

There are also references to Tim’s movies in the taxidermy shop Uriah’s Heap with mice dressed up as certain Tim Burton characters.

Wednesday’s production designer Mark Scruton revealed the gargoyles at the school are a big clue about the plot of the show.

The gargoyles represent different groups of students at the school including werewolves, sirens and vampires.

Writer Edgar Allan Poe features heavily in Wednesday and during a boat race you’ll notice that the team boat names are all inspired by Poe’s work.

The Pit and the Pendulum, The Gold Bug, The Black Cat and The Cask of Amontillado are all Poe stories that serve as inspiration for their design and names.

Ravens (Poe’s most famous poem The Raven) are seen throughout the show and are included in some of Wednesday’s visions.

Did you spot any more Wednesday easter eggs?