Hit: Marsch has put his stamp on Leeds FREE TO WATCH: Highlights from the match between Leeds United and Chelsea in the Premier League

Jesse Marsch has already had some dramatic wins as Leeds boss but nothing as complete as this performance, nothing against a team of this calibre. Even Marcelo Bielsa had only one Premier League home win against a top-six team and that was in an empty stadium against Ryan Mason’s Tottenham. Elland Road was in ecstasy for this one.

The thrill for Marsch will be that his fingerprints were all over it. Tyler Adams, his compatriot, was superb in the middle of the pitch. He does not have Kalvin Phillips’ range of pass but he brings plenty of other qualities. His tackle on Conor Gallagher early in the game raised the crowd and set the tone for the performance.

The key moment was also made in America. Marsch had been urging his players forward from the outset – quite literally gesticulating as much with his arms – and that spirit was embodied by Brenden Aaronson for the opening goal. After losing possession, the player rushed Edouard Mendy in the Chelsea goal and induced the error.

“It shows you who wanted it more in that moment in time,” Aaronson told Sky Sports afterwards. “We had the drive. We were pumped up. The crowd got us driven and that is the kind of goals we score.” That is the kind of football these Leeds fans want to see too. Marsch’s name was chanted briefly at the end. This is his team now.
Adam Bate

Miss: Has anyone seen Kai Havertz?

If someone asked you what kind of player Kai Havertz is – what would be your response? A playmaker? An inside forward?

Chelsea have a well-documented problem in their forward line. They need a focal point. And Thomas Tuchel’s task isn’t being helped by such timid performances by Havertz.

I was on the live blog, doing the minute-by-minute commentary for the 3-0 defeat at Leeds and I had to check the teamsheet after about 30 minutes to make sure Havertz was actually playing. He just wasn’t involved in any of Chelsea’s, albeit sporadic, attacking play – that was being taken care of by Mason Mount and Raheem Sterling, who did cause problems for Leeds when given space.

The same cannot be said for Havertz.

The German played the entire 90 minutes but had just 38 touches of the ball and made just six completed passes in the final third – only centre-back Thiago Silva made fewer. For context, Mount and Sterling had 27 between them. Havertz also failed to have a single shot in the game as the 90 minutes just seemed to pass him by.

Perhaps it is a confidence issue. Tuchel obviously has a huge amount of faith in the player who scored the winning goal in Chelsea’s Champions League final victory but his recent numbers are worrying.

His only goal from his last 25 shots in his last 12 Chelsea appearances came on the final day 2-1 Premier League home win vs already-relegated Watford and he’s only found the net once in his last 15 appearances for club and country.

Such is the relentless pace at the top of the Premier League, Chelsea can ill afford to carry such passive performances by a player.
Lewis Jones

Hit: Newcastle can mix it with the big boys 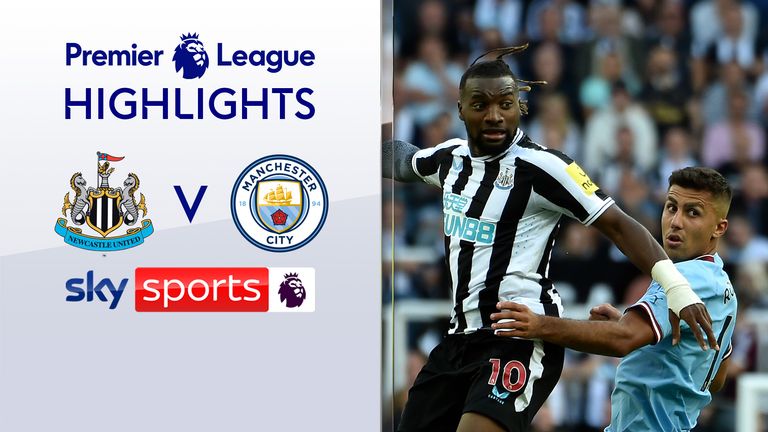 FREE TO WATCH: Highlights of Newcastle against Manchester City in the Premier League.

There is a reason City came into the game with 27 wins from their previous 28 games when scoring first. Once they go in front, they do not take their foot off the gas. Many teams wilt under the pressure, but Newcastle stood strong after Ilkay Gundogan’s fifth-minute opener.

They remained true to the positive game plan Eddie Howe had promised before kick-off, did not allow Manchester City to dictate the game and instead completed a deserved first-half turnaround through a display of clinical but superb counter-attacking football.

Kieran Trippier and Allain Saint-Maximin’s faces told their disappointment in the result when they spoke to Sky Sports after the game, but in the cold light of day Newcastle will reflect on an excellent performance when they made the most of their own qualities against a technically superior side.

In the days of Rafael Benitez or Steve Bruce Newcastle would have sat with a low block, most likely in a back five, and asked the few front players they were prepared to leave further forward to chase anything that came their way. Don’t lose, rather than try to win.

Although they still played on the counter-attack, this was a whole different ball park. Howe’s rationale was that sitting back would allow City’s quality players time to open Newcastle up, and instead trying to win the ball higher up the pitch would allow them to get forward more directly to hurt the champions.

That was exactly how it turned out, thanks in part to the individual brilliance of Allan Saint-Maximin, who made all three goals, but also Bruno Guimaraes, who completed more final-third passes than any Newcastle player as the hosts played quality balls forward from deep time after time, especially before the break.

Howe has created a team which is greater than the sum of its parts, which ironically feels all the more impressive given the money at his disposal, when big names can prove more attractive than practical signings. Just as Guardiola’s City have used their vast resources to strike that balance just right, so Howe increasingly appears to be creating something impressive on Tyneside.
Ron Walker

Hit: Pep knows exactly where City are, if he didn’t before

Although Pep Guardiola will be concerned about how Newcastle dominated midfield for much of their draw at St James’ Park, they are well aware of the dangers of how their style can be exploited on the break, and he will not be overly worried.

He will be more impressed by how they came through a major early-season test, however, wrestling back the momentum at a raucous St James’ Park to rescue a point. In recent weeks, Guardiola has suggested he doesn’t know exactly where his side is – but he will after the resilience they showed in the North East.

The towering stadium on the banks of the Tyne has become a fortress where the Magpies had lost only one of their previous six games, and had put paid to Arsenal’s Champions League qualification hopes at the back end of last season.

Guardiola’s concerns followed a truncated pre-season and a below-par performance in the Community Shield, and although this draw ended their perfect start to the season, the fight of another gruelling Premier League campaign still burns brightly in his City players.

With the quality of new arrival Erling Haaland’s positioning and runs and Kevin De Bruyne back to his very best, the opening three games have given Pep plenty to be positive about at the Etihad and, of course, no team will go through the season without dropping points – City are just as much the team to beat as they were at 4.30pm.
Ron Walker 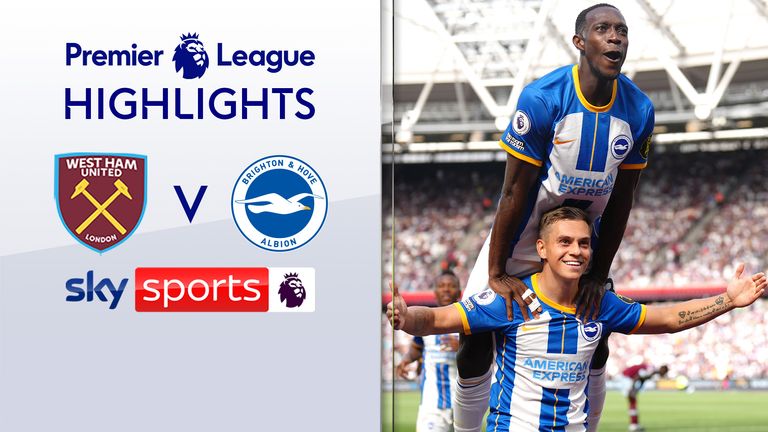 FREE TO WATCH: Highlights of West Ham against Brighton in the Premier League

All eyes have been on teenager Moises Caicedo amid interest from United, but it was his midfield partner, Alexis Mac Allister, that caught the eye at West Ham on Sunday.

The Argentina international had a hand in both goals, converting confidently from the penalty spot in the first half before picking out Pascal Gross with the pre-assist for Leandro Trossard’s goal after the break.

Mac Allister’s influence on the Brighton team went so much further that, though. He was pivotal in winning the midfield battle up against Declan Rice and Tomas Soucek and dictated play at the London Stadium, with the help of Caicedo it must be said.

No other player on the pitch could match Mac Allister’s 60 completed passes, with Caicedo his only team-mate to better his 88 per cent passing accuracy. He also had a team-high two interceptions.

The 23-year-old has been quietly going about his business. It won’t be long before people take notice.
Zinny Boswell 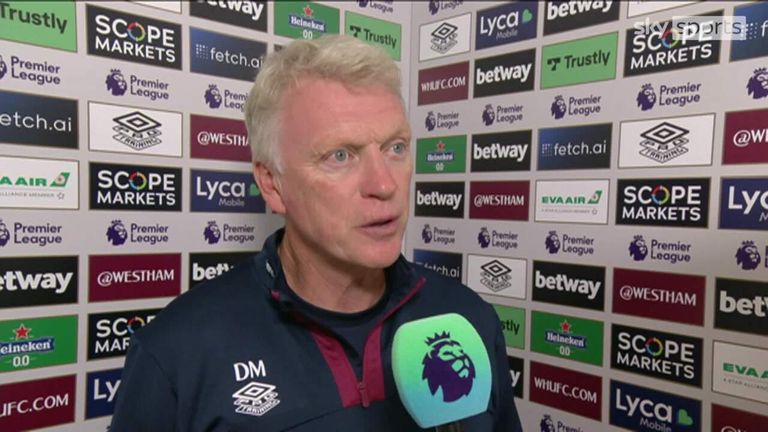 West Ham finished seventh last season, reached the Europa League semi-finals and strengthened in the summer – why are they without a goal or a point after three games?

David Moyes raised the loss of former club captain Mark Noble in his post-match news conference. He then proceeded to lay into his players for their lack of character when asked if others need to step up in his place.

“You’re looking at that game today and you’re thinking, ‘You take responsibility, you take ownership of it’,” he said. “I could name a few who I thought, ‘Hey, come on, you bowed to that today, and you should have really taken it on’.”

Declan Rice has taken on the mantle of captain, and there is no doubting his leadership qualities. But others around him need to step up and share the burden.

So often last season, Noble came off the bench to steady the ship or change a game. He had the experience to calm the team or roar them on when they needed it.

“Losing Mark Noble, he was important to us,” added Moyes. “He was important around the club. Everybody talked about it last season. Small things can make a big difference sometimes.”

On Sunday, there was a passive feeling to West Ham’s performance at times, unable to regain control of the game from an impressive Brighton team.

Moyes will be hoping the players he mentioned heard his criticism and take the hint.
Zinny Boswell