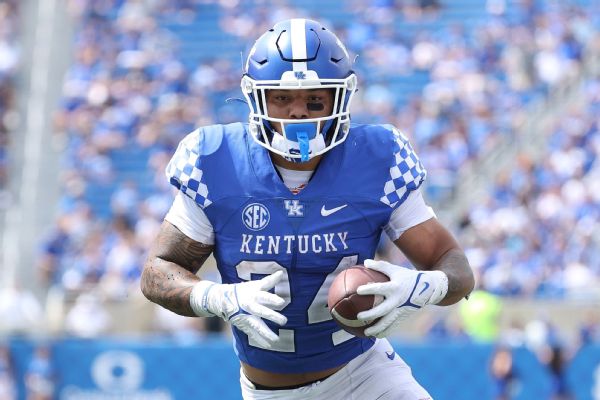 Kentucky will be without star running back Chris Rodriguez Jr. for the second straight game when the No. 20 Wildcats travel to No. 12 Florida on Saturday, sources told ESPN.

Rodriguez, the SEC’s leading returning rusher with 1,379 yards a year ago, remains sidelined while awaiting a ruling on an NCAA matter, according to sources, and Kentucky is hopeful of receiving an answer within the week. The expectation is that he will miss at least three games. Kentucky plays Youngstown State on Sept. 17 and Northern Illinois on Sept. 24, both home games.

Kentucky was held to 50 rushing yards in its season-opening 37-13 win over Miami (Ohio). Senior running back Ramon Jefferson, who transferred from Sam Houston State, tore an ACL in the opener and will miss the rest of the season.

Coach Mark Stoops has said only that there were several different layers to the Rodriguez decision and that it was out of Stoops’ hands.

Matt Jones of Kentucky Sports Radio reported prior to the season that he expected Rodriguez to be out three to four games.

In May, Rodriguez was arrested and charged with DUI. He later accepted a guilty plea during his pretrial conference.

Kentucky announced Thursday that outside linebacker Jordan Wright would be back for the Florida game after missing the opener.

The Wildcats have won two of the last four games against the Gators after losing 31 in a row in the series.