Sex, sauce and drugs:The reality of working in fast food as told by workers Secrets of a fast food restaurant: Employees reveal realities of working in McDonald’s, Subway and Burger King – from co-workers having sex in the walk-in freezer to punishing rude customers

By Eve Tawfick For Mailonline

Anyone who has worked at a fast food restaurant will tell you it can be a difficult and challenging job.

But now employees from around the world have taken to confessions site Whisper to reveal all the details of the job from beyond the tills – and they will make you think twice about your next takeaway.

One person revealed how they walked on in their colleagues having sex in the freezer, while another said their co-workers are all on drugs.

However some confessions reveal a more wholesome side to the industry, such as one Burger King Robin Hood who ‘steals around 35 burgers a day to give to the homeless’ 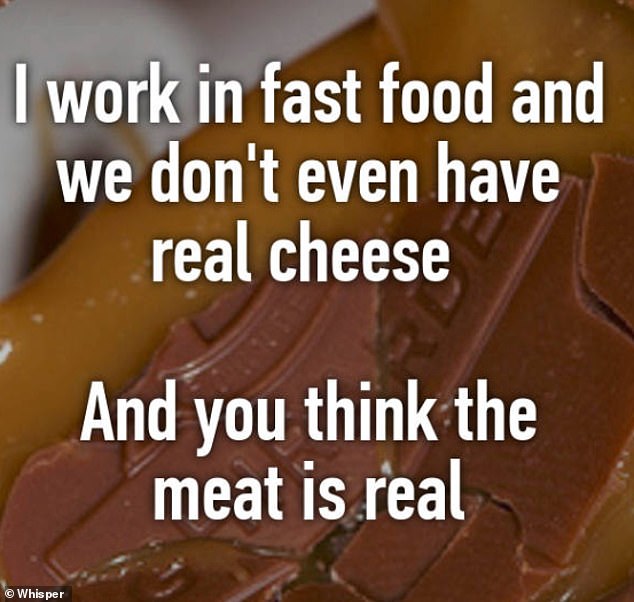 Employees from around the world have taken to confessions site Whisper to reveal all the details of the job from beyond the tills. This fast food worker from Fort Wayne, Indiana, says that the cheese isn’t real and neither is the meat 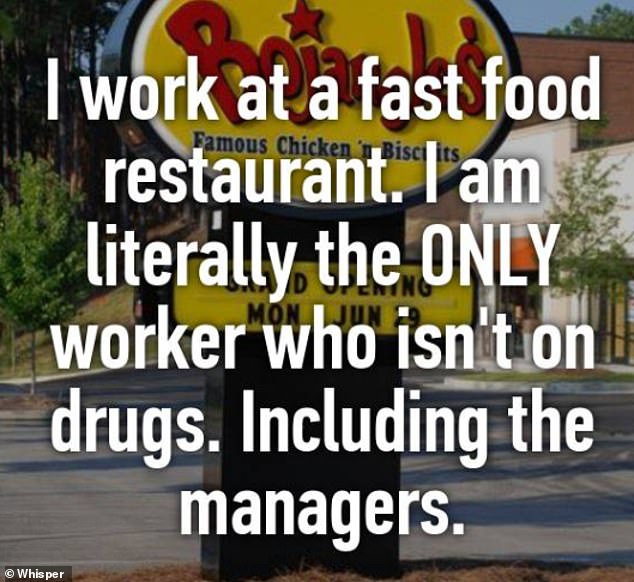 This employee, from Arizona, revealed that he is the only one in his team at work who doesn’t take drugs 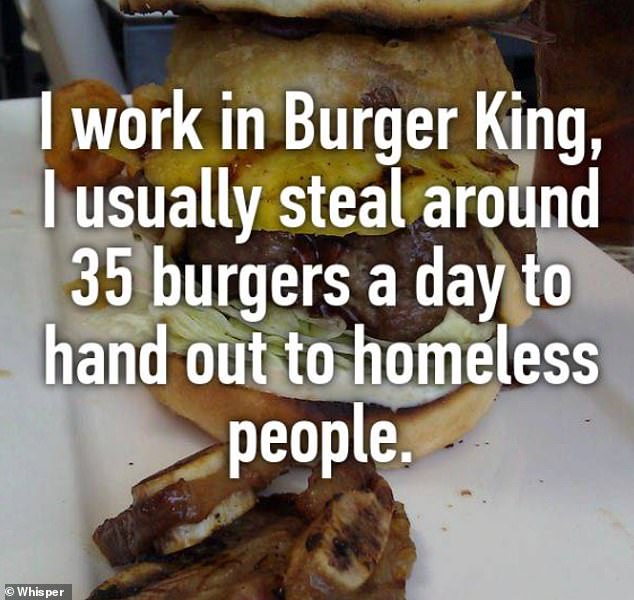 Robin Hood of Burger King? This US worker said they are stealing up to 35 burgers a day from the cooperation to give to the homeless 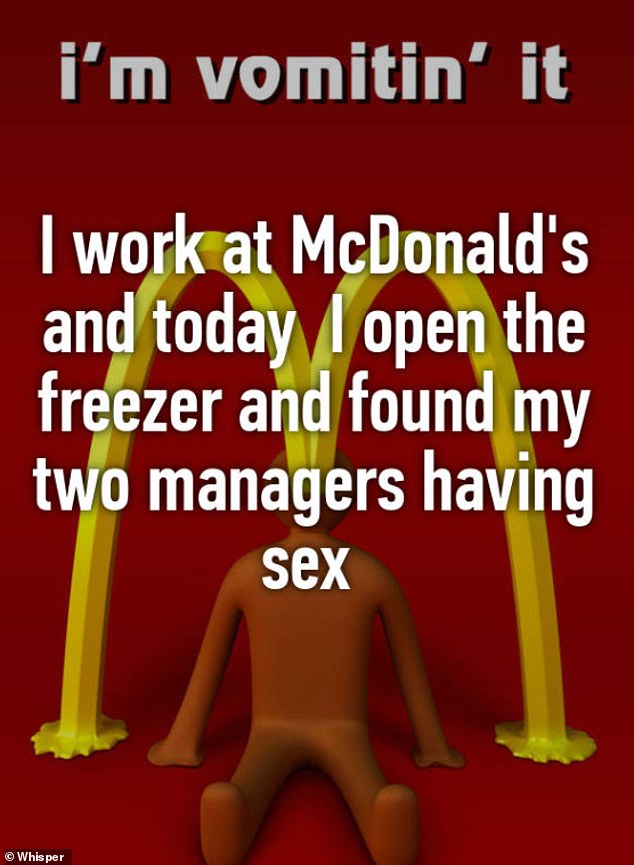 Not Lovin’ It! This Los Angeles McDonald’s employee got a nasty shock when they stumbled across two managers getting intimate next to the frozen goods…. 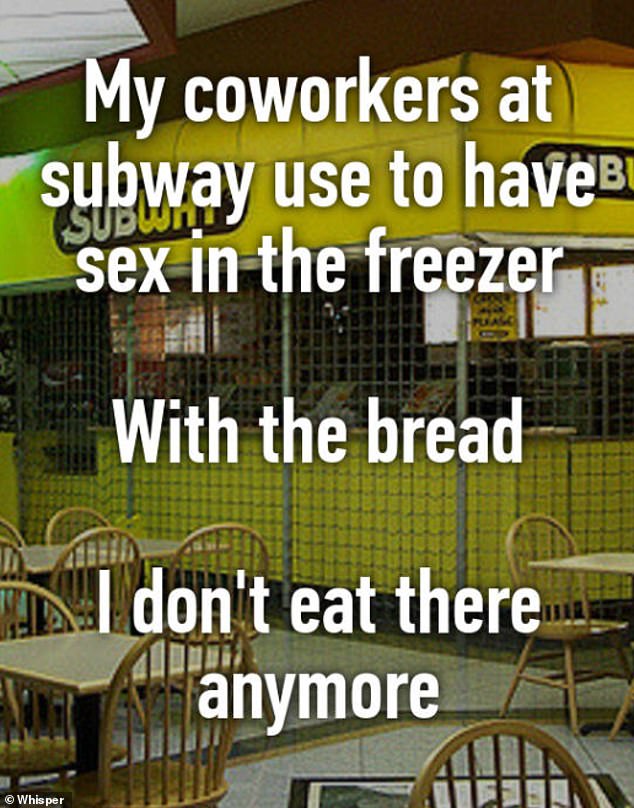 Another person claimed they had caught two co-workers getting hot in the freezer, right next to the bread at a Subway in Evansville, Indiana 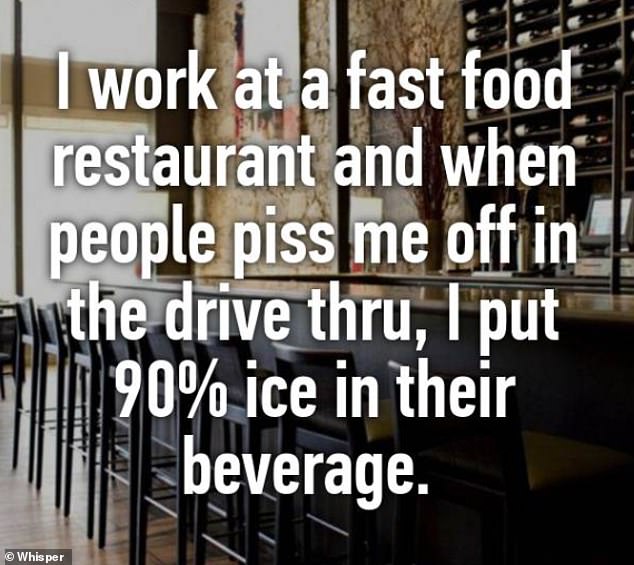 Ice cold service: This worker in Okemos, Michigan, said they will fill up a customers beverage with cubes if they are rude at the drive thru 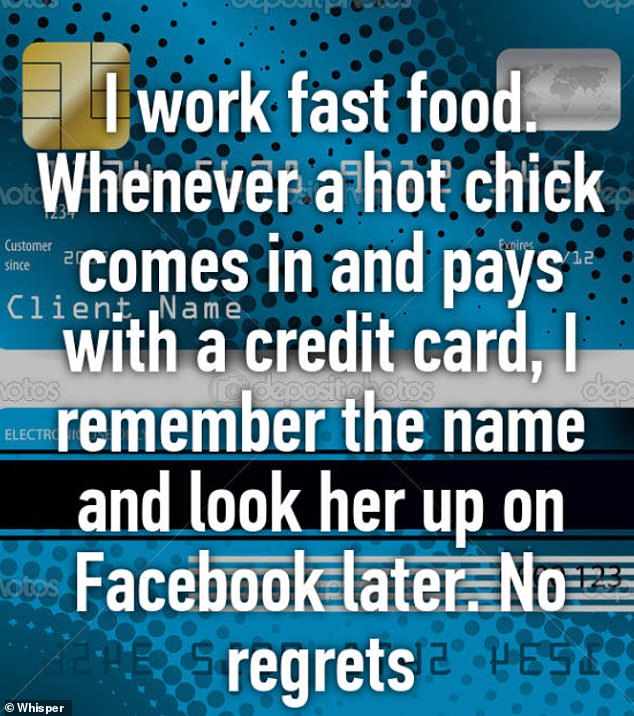 Fast operator: This man, from Montana, creepily admitted that he has ‘no regrets’ stalking women online after getting their names from their credit cards when they pay 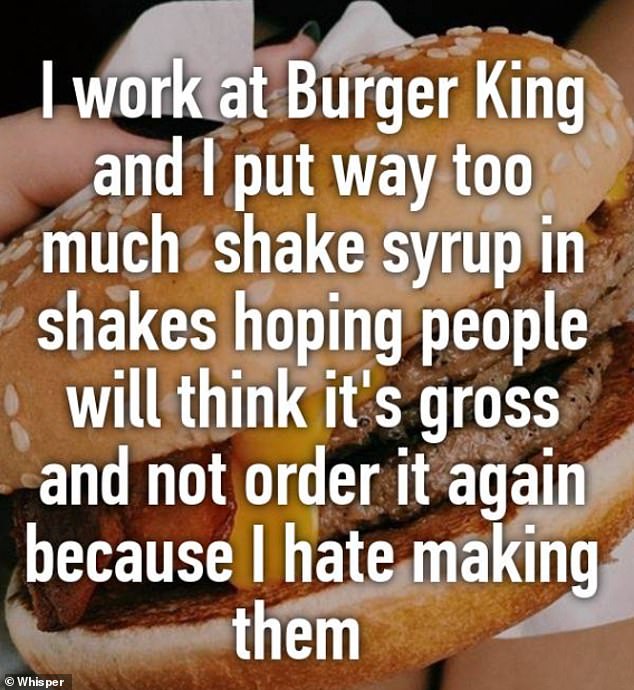 Shake sabotage! This Burger King worker from Michigan said that they ‘hate’ making the milkshakes and purposefully put too much syrup in them so customers think they are ‘gross’ and don’t order them 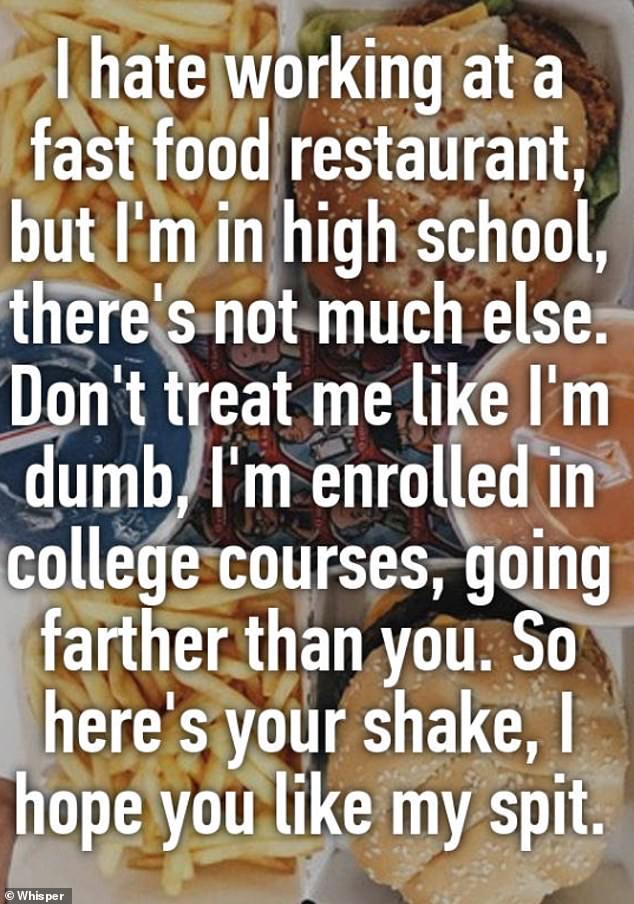 This person may claim to be educated but they certainly don’t have manners! This US-based worker has had enough of customers and decided to spit in their drink 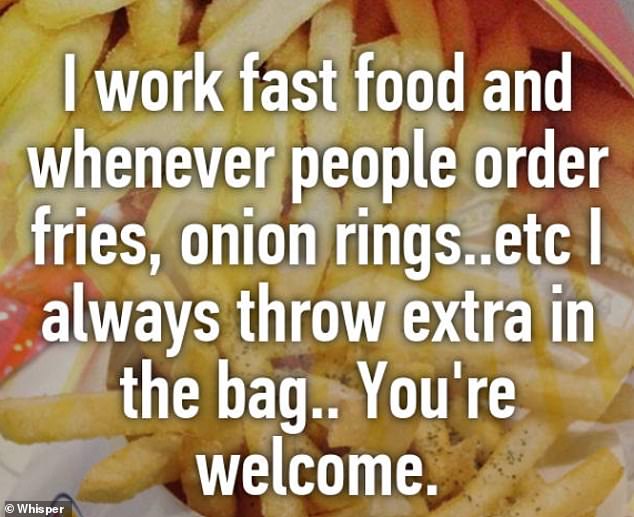 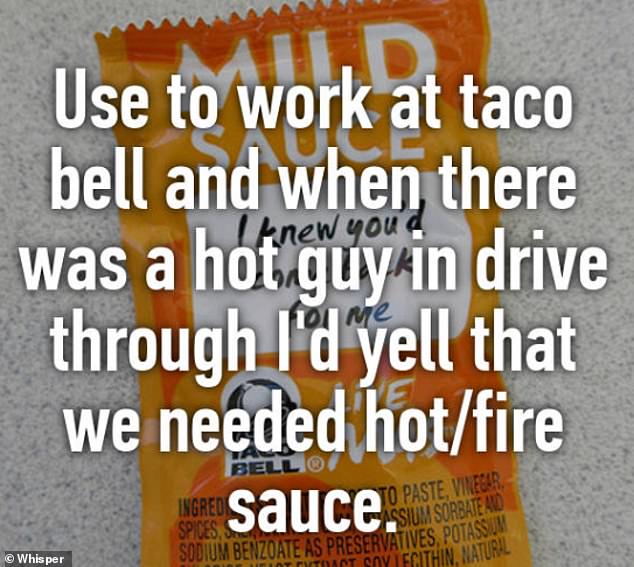 Saucy codenames: This worker from Taco Bell in Winter Park, Florida confessed they shouted out code fire when a hot man arrived in the drive thru so others could get a look 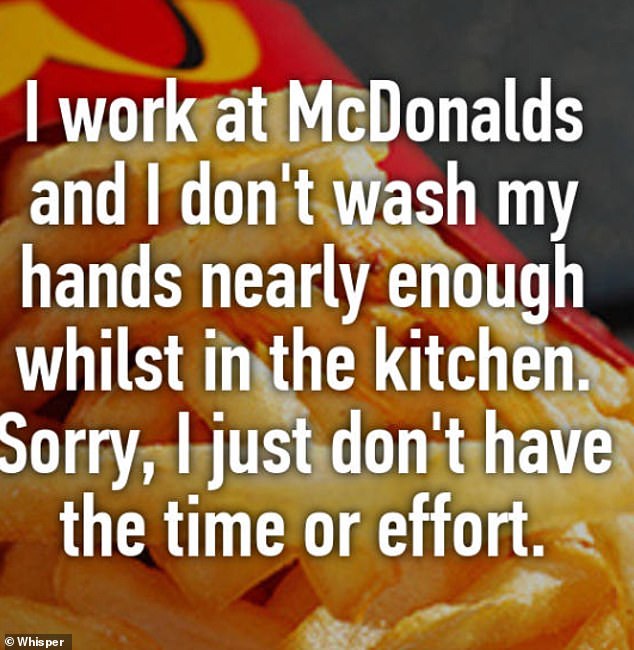 Mc-no thanks! This McDonald’s worker from Kettering, Northampton has said they ‘don’t have the time’ to wash their hands enough during work – yuck! 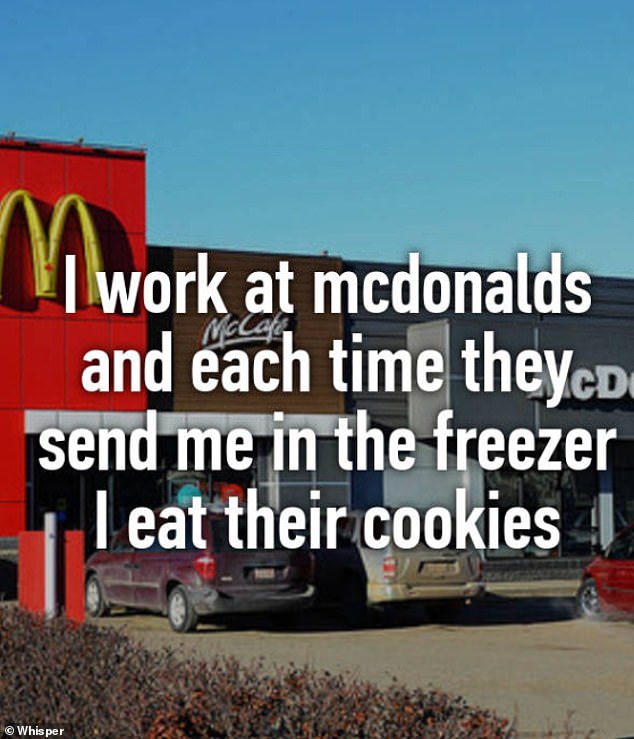 Mc-Secret: This worker from the US admitted they regularly sneak some cookies to eat when in the freezer 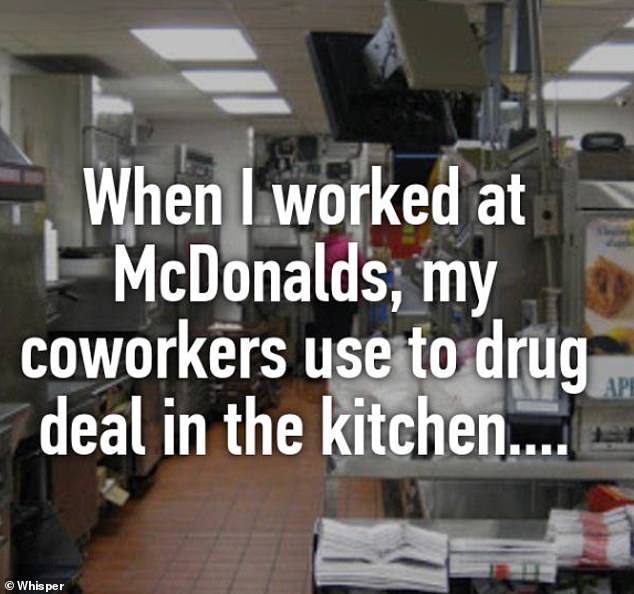 Getting fried in the kitchen: This McDonalds worker from the US revealed that the kitchen wasn’t just for cooking burgers – it also doubled up as  a hotspot for drug deals