Terrifier 2 Oscar winners? Not a phrase you’d expect to hear in any way shape or form but this years best slasher has been submitted for Oscars consideration for a goof. 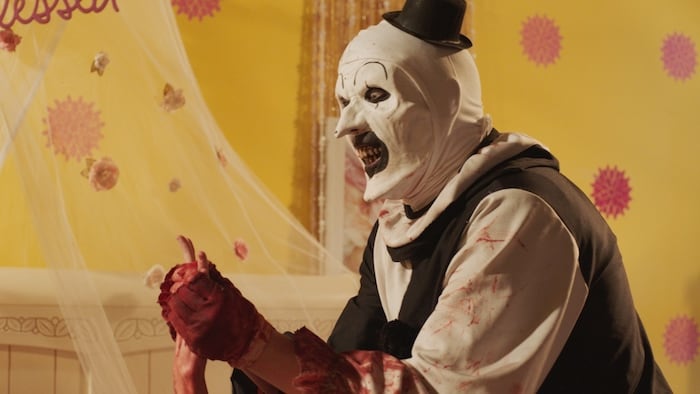 Imagine Art the Clown suited and booted collecting an award on the night whilst all the well-dressed celebrities look on in horror, oh it would be beautiful.

Producers announced last week that they have officially submitted the movie for Oscars recognition and Bloody Disgusting (the distributors of the movie) have also submitted as per Academy submission rules.

The thought of having Academy members endure an extreme horror movie such as this was too hilarious of an opportunity to pass up.

Horror movies fail at the Oscars at almost every hurdle with only 18 horror films ever getting recognition in the entire ceremony’s history.

The Silence of the Lambs picked up a Best Picture Oscar and nothing has really hit those heights since.

Terrifier 2 was certainly a mixed bag for me as what it lacks in story or character development it makes up for with incredible special effects and giving birth to a brand new genre of horror.

I felt the movie dragged on considerably and all of these stories about people fainting in the cinemas whilst watching it just seem like a poor ploy to get more bums on seats to watch it.

The film is doing incredibly well at the box office and has already surpassed $10 million which for a low budget $250,000 feature is incredible.

The filmmakers deserve all the credit for this powerhouse feature that is showing every independent filmmaker out there that it can still be done and success from a low-budget feature is still within grasp.

Nominations for the upcoming Academy Awards are to be announced on January 24, 2023, and who knows. Maybe Art the Clown will get some recognition!