Ukrainian emergency workers in hazmat suits have carried out drills to prepare for a nuclear disaster at the Zaporizhzhia power plant as Russia‘s military warned of a ‘provocation’ it predicts will take place there tomorrow.

Men and women covered head-to-toe in protective suits, gas masks, gloves and rubber boots hosed down volunteers posing as irradiated victims – wheeling them around a supermarket car park in the city of Zaporizhzhia on gurneys and passing them through a medical tent on stretchers strapped to a conveyor belt.

In the event of a meltdown at the Zaporizhizhia plant – which is not located in the Ukrainian-controlled city that shares its name, but is actually 30 miles down the Dnipro River on Russian-occupied territory – the car park would act as a reception centre for thousands caught in the fallout.

The drills took place late Wednesday, just hours before Russia’s military spokesman Lieutenant General Igor Konashenkov issued a grim warning that a ‘provocation’ is due to take place at the plant Friday during a visit to Ukraine by UN chief Antonio Guterres and Turkish President Recep Tayyip Erdogan.

Konashenkov said Russia would be blamed for what he called a ‘man-made catastrophe’ caused by Ukraine in an attempt to discredit Moscow. It comes after days of shelling around the plant that each side blames on the other.

Kyiv says Moscow has turned the power station – Europe’s largest nuclear plant – into a military base, stored explosives in and around the reactors, and is preparing a ‘false flag’ attack there. 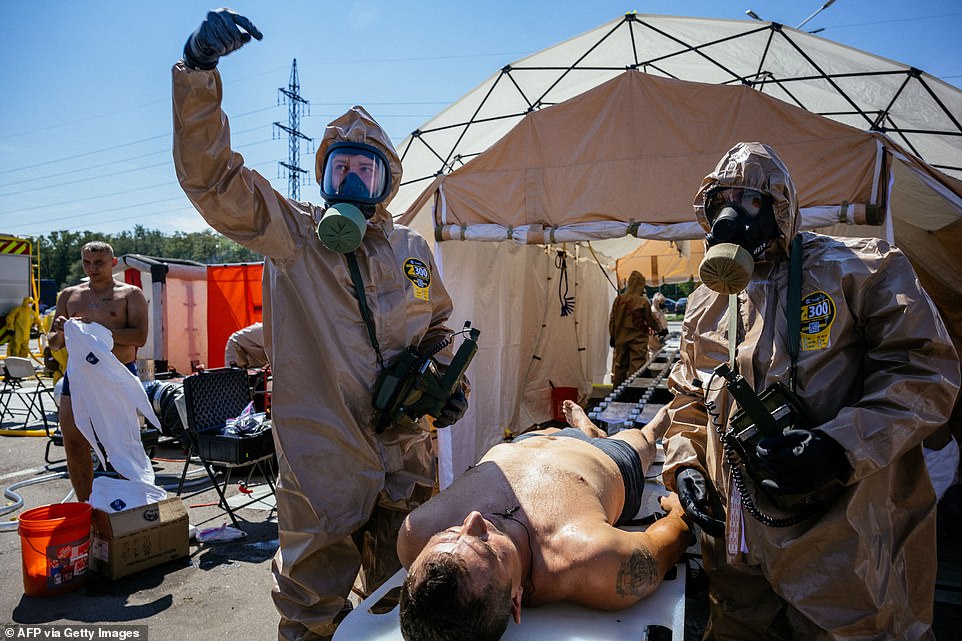 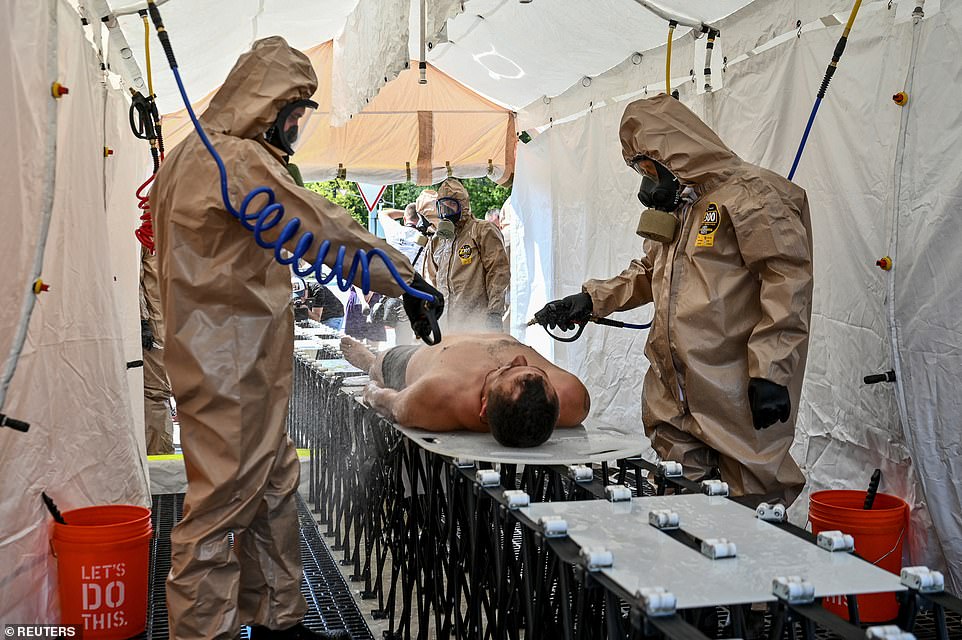 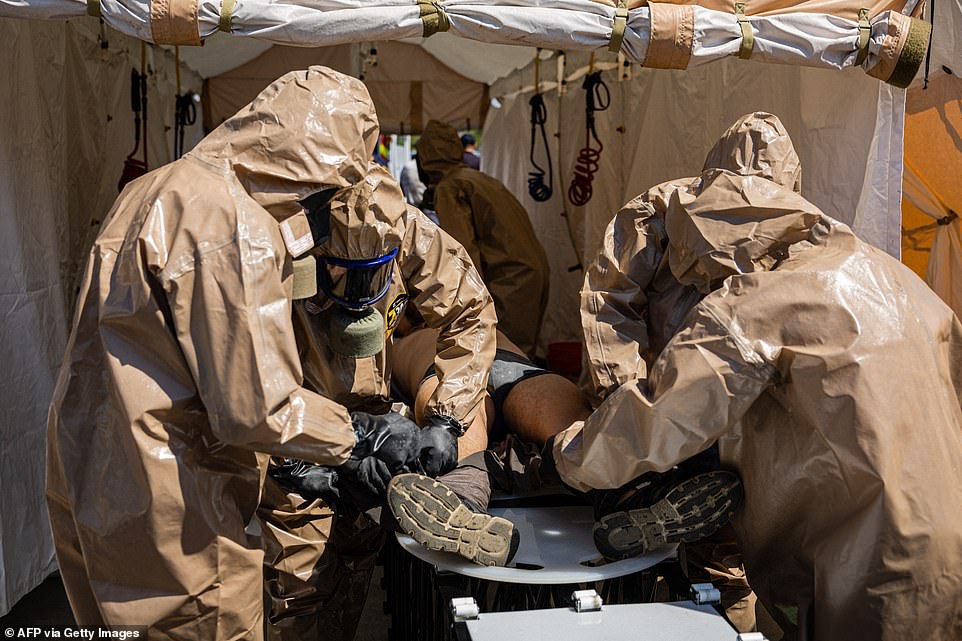 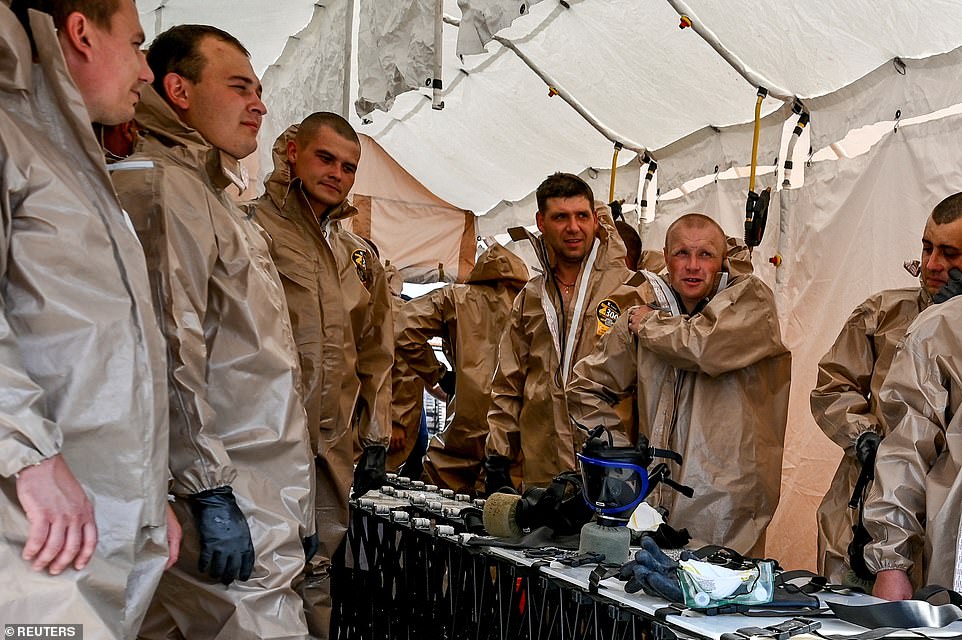 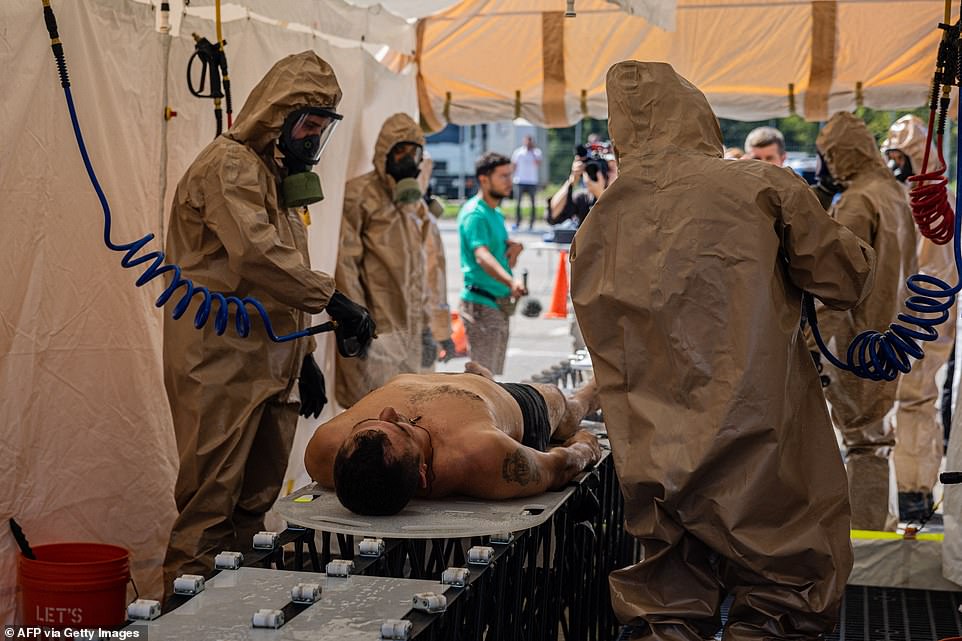 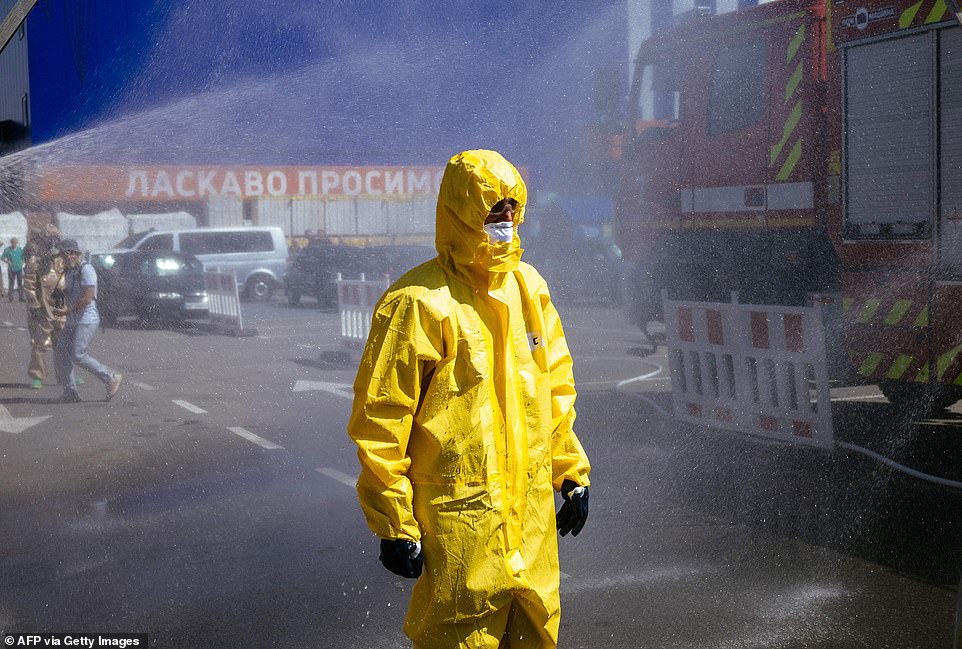 Russia has occupied the power plant since the early weeks of Putin’s war in Ukraine, after its forces swept out of occupied Crimea and took control of large areas of southern Ukraine.

However, warnings about the stability of the plant have stepped up in recent weeks as Russia attempts to disconnect it from Ukraine’s main power grid and divert its energy to Crimea – and as a major Ukrainian counter-offensive to re-take the south ratchets up.

Guterres is due in Lviv today alongside Turkish President Recep Tayyip Erdogan to discuss the situation around the power plant and the possibility of sending in a team of international inspectors to ensure its safety.

Erdogan, making his first visit to Ukraine since the war began, will also discuss a deal to allow Ukrainian ships carrying vital loads of grain out of the country to avoid a global famine.

Some ships have already been leaving Ukraine’s Black Sea ports, but levels are well below normal. There are also concerns the food shipments will not be allowed to reach global markets as hoped after the first vessel made a surprise diversion from Lebanon – where it was initially due to dock – to Syria, a close ally of Russia.

U.N. spokesman Stephane Dujarric told reporters this week that Guterres’ trip to Ukraine will allow him ‘to see first-hand the results of an initiative that is so critically important to hundreds of millions of people.’

Dujarric added that he expects ‘the need for a political solution’ to the war to be raised in Thursday’s talks.

In his nightly video address Wednesday, President Zelensky reaffirmed his demand for the Russian military to leave the plant, emphasizing that ‘only absolute transparency and control of the situation at and around the Zaporizhzhia nuclear power plant for the Ukrainian state, for the international community, and for the IAEA can guarantee a gradual return to normal nuclear safety.’ 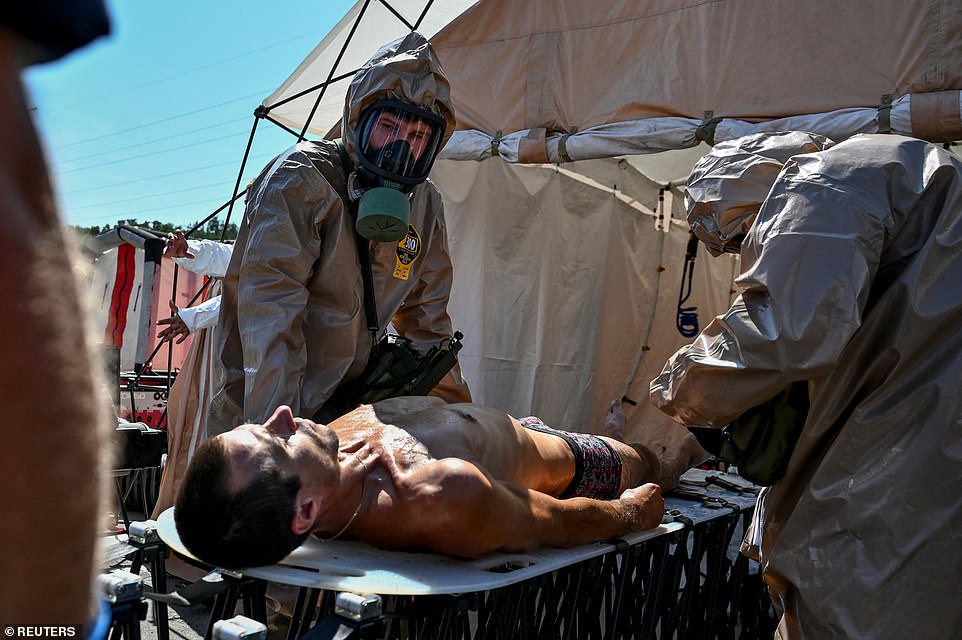 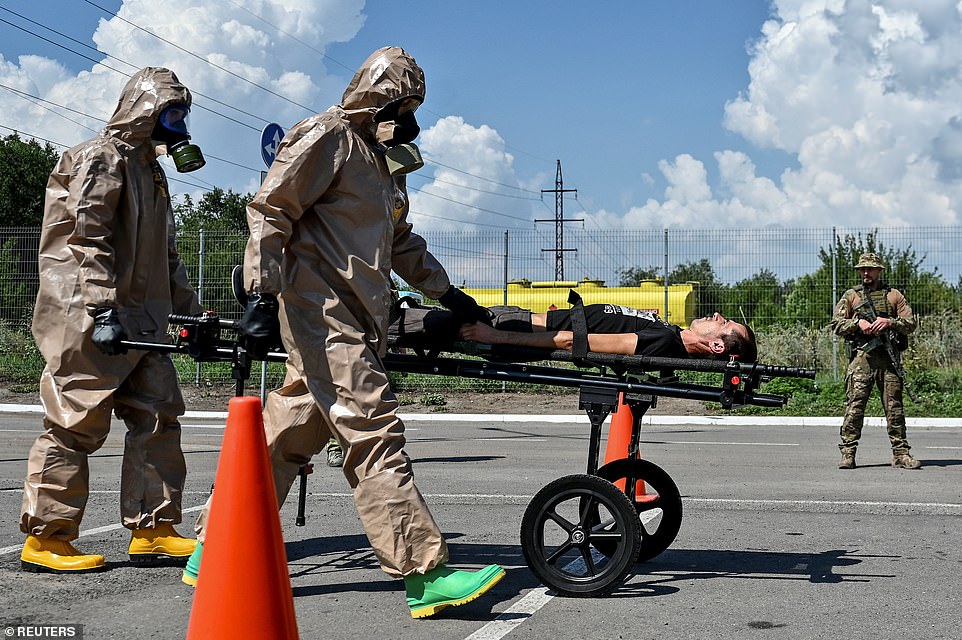 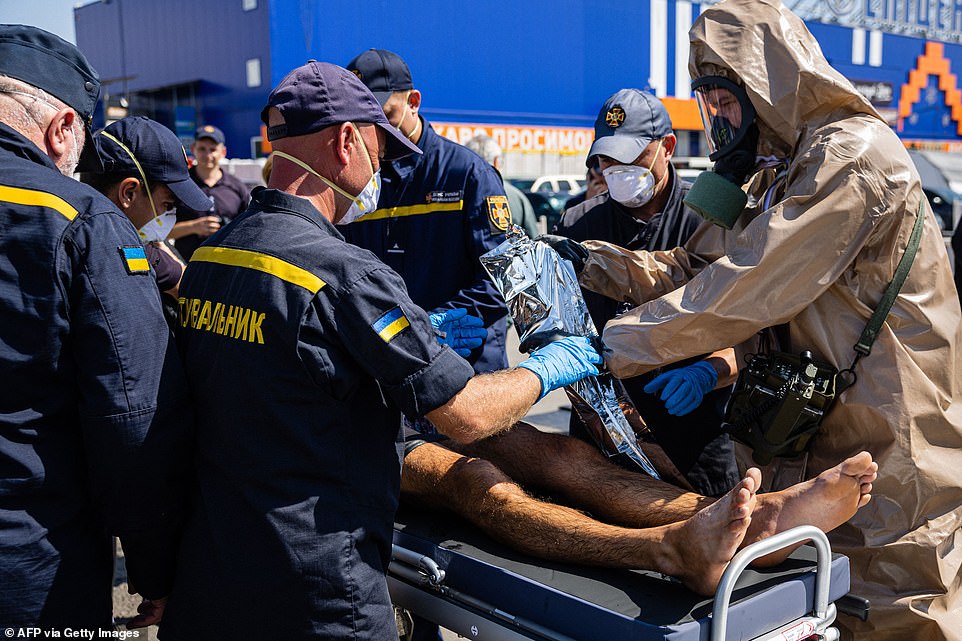 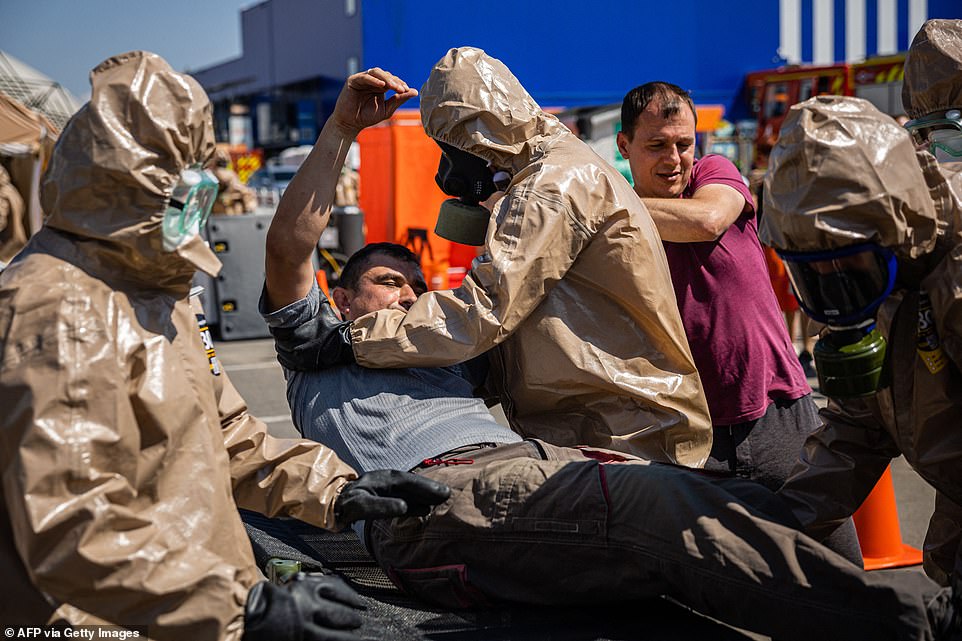 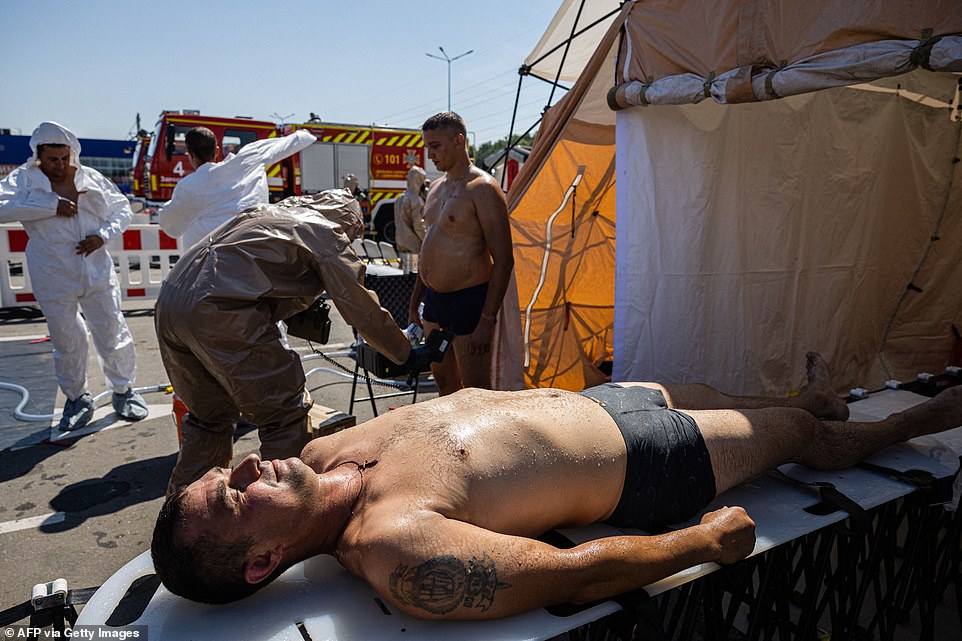 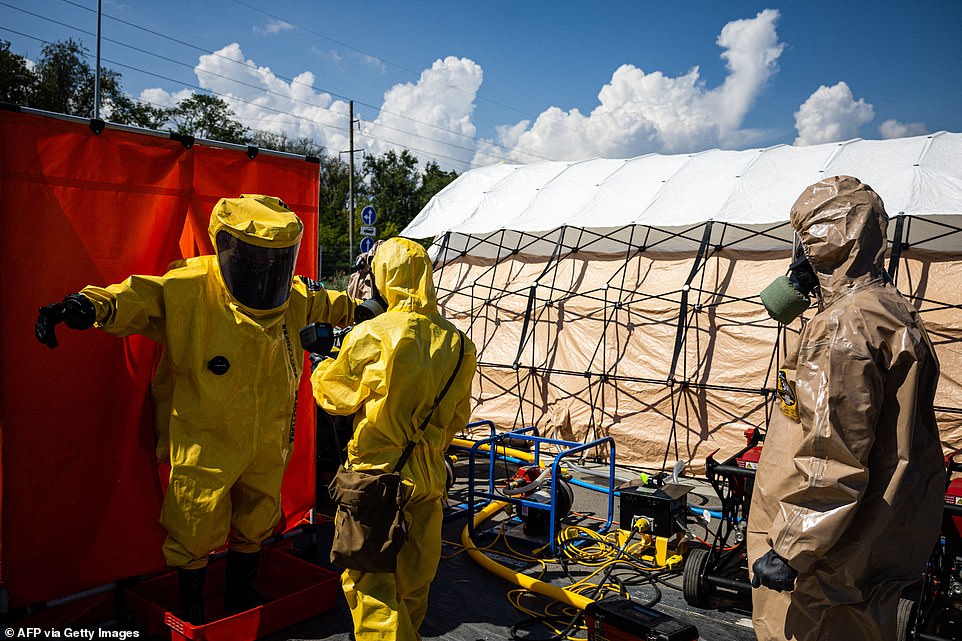 The International Atomic Energy Agency is a U.N. agency. Russia has rejected the demand.

Erdogan’s office has confirmed that he would discuss the grain deal during the talks as well as ways to end the war through diplomatic means. Earlier this month, the Turkish leader met on the same issues with Putin.

Meanwhile, Ukrainian forces said on Thursday they had beaten back a Russian attack in the southern region of Kherson, while the death toll from Russian shelling of Kharkiv city in Ukraine’s northeast climbed as the nearly six-month war grinds on without let-up.

‘Russian forces have achieved only minimal advances, and in some cases we have advanced, since last month,’ Ukrainian presidential adviser Oleksiy Arestovych said in a video. ‘What we are seeing is a ‘strategic deadlock’.’

‘This is a devious and cynical strike on civilians with no justification,’ Zelenskiy said on the Telegram messaging app.

One person was killed and 18 were wounded on Thursday in pre-dawn shelling of another residential area of Kharkiv, Oleh Synehubov, the regional governor said.

In the south, Ukrainian forces routed an attempted advance by Russian forces near the town of Bilohirka, northeast of Kherson, Ukrainian military analyst Oleh Zhdanov said.

The south district of the Operational Command of the Ukrainian armed forces said Ukrainian forces killed 29 ‘occupiers’ as well as destroying artillery, armoured vehicles and a military supply depot.

The United States, Albania, France, Ireland, Norway and Britain have asked the U.N. Security Council to meet on Aug. 24 to discuss the impact of the war in Ukraine, diplomats said, marking six months since Russia’s invasion. 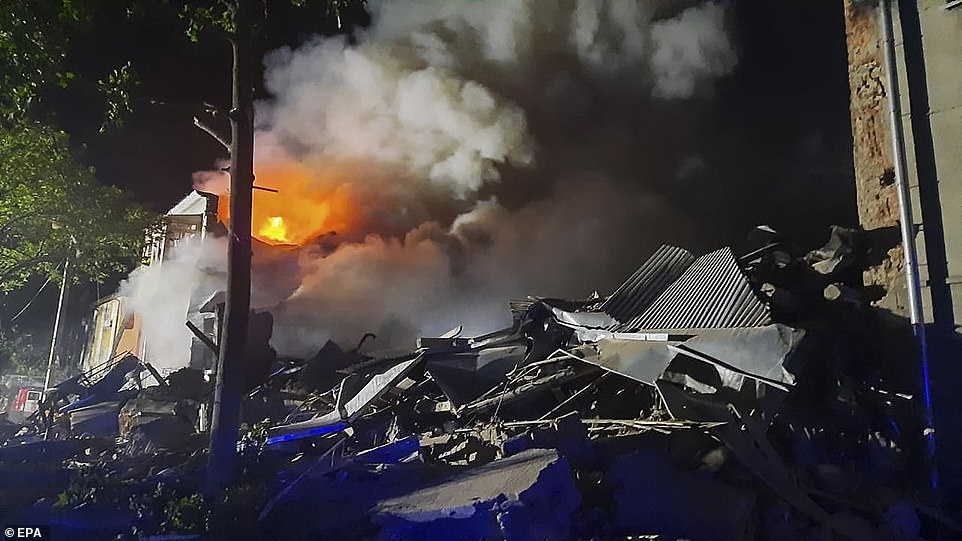 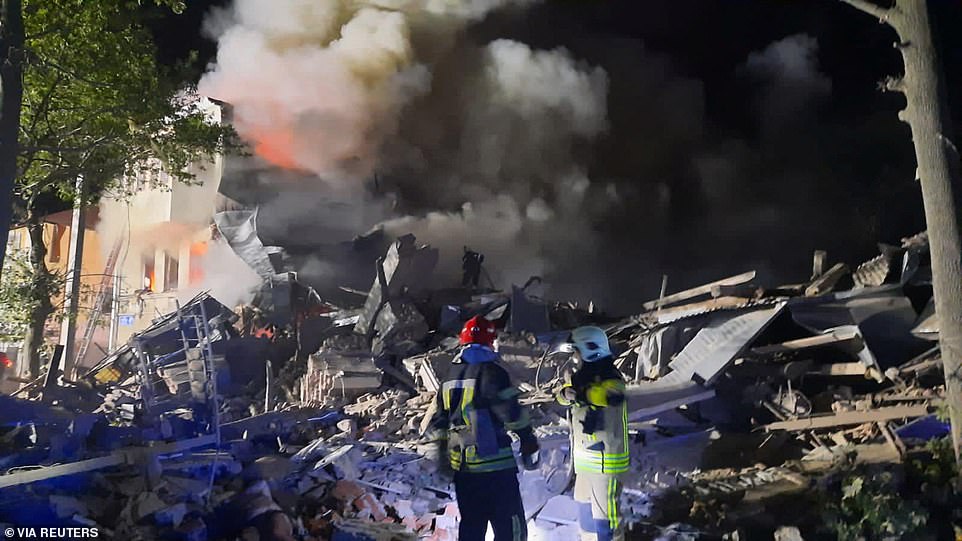 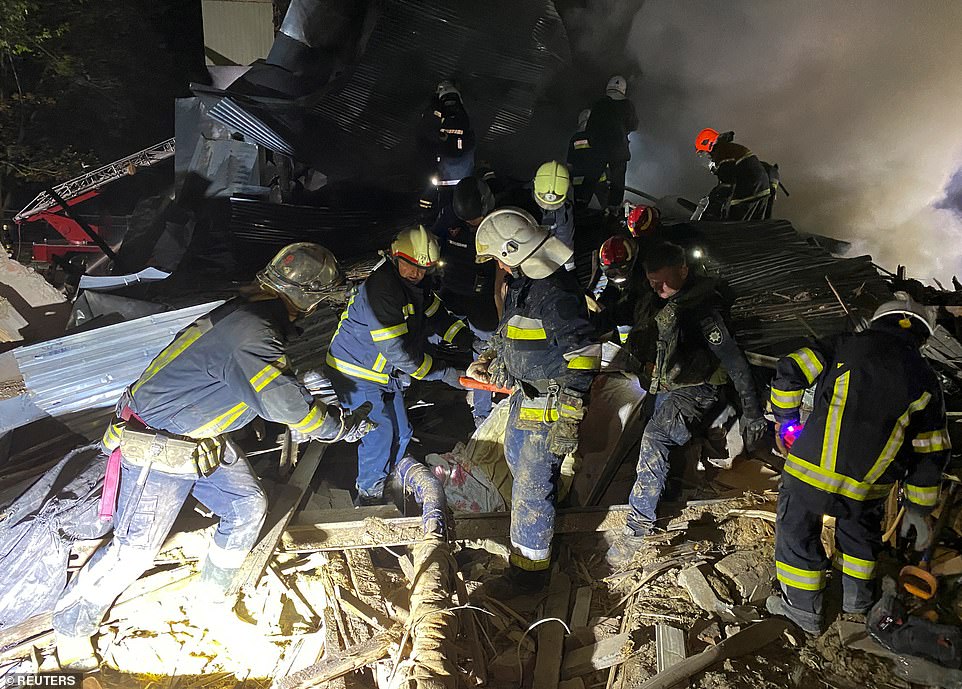 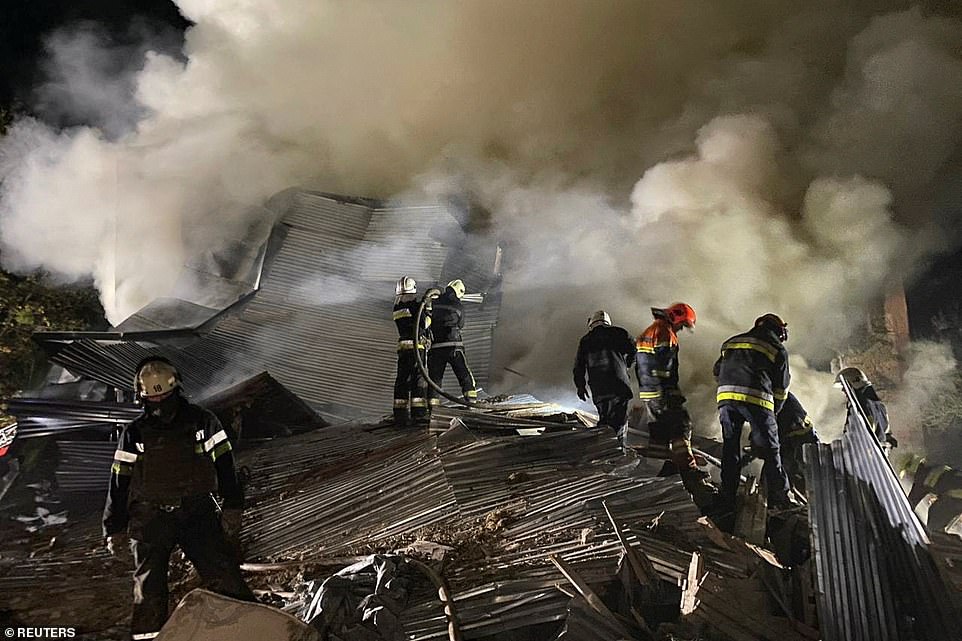 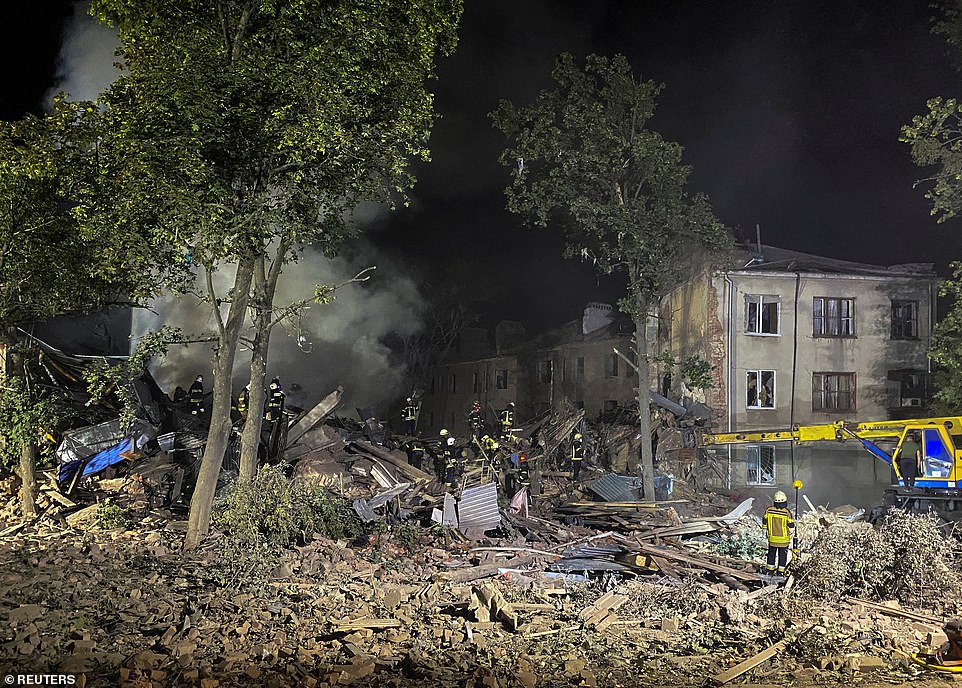 A series of blasts at military bases and ammunition depots in the past week in Crimea, the Black Sea peninsula annexed by Russia in 2014, has suggested a shift in the conflict, with Ukraine apparently capable of striking deeper into Russian-occupied territory.

Russia blamed saboteurs for the attacks, while Ukraine has not officially taken responsibility but has hinted at it.

Ukrainian military intelligence said in a statement that after the recent explosions in Crimea, Russian forces had urgently moved some of their planes and helicopters deeper into the peninsula and to airfields in Russia. Reuters could not independently verify the information.

On Wednesday, Russia’s RIA news agency cited sources as saying the commander of its Black Sea fleet, Igor Osipov, had been replaced with a new chief, Viktor Sokolov.

If confirmed, it would mark one of the most prominent sackings of a military official in a war in which Russia has suffered heavy losses of men and equipment.

The Black Sea Fleet, which has a revered history, has suffered several humiliations since President Vladimir Putin launched the invasion of Ukraine – which Moscow calls a ‘special military operation’ – on Feb. 24.

In April, Ukraine struck Russia’s flagship the Moskva, a huge cruiser, with Neptune missiles. It became the biggest warship to be sunk in combat for 40 years.

Crimea provides the main supply route for Russian forces in southern Ukraine, where Kyiv is expected to launch a counter-offensive in coming weeks.

The Black Sea Fleet has also blockaded Ukraine’s ports since the beginning of the war, trapping vital grain exports that are only now starting to move again, and sending global food prices soaring.

The government in Kyiv has said it hoped to increase the monthly volume of sea exports to 3 million tonnes in the near future to clear a backlog of 18 million tonnes of grains left over from last year’s harvest and start selling new crops.