We’ll keep tweeting (for now) but have also started tooting.

We’ll keep tweeting (for now) but have also started tooting.

“Déjà vu all over again.” Another run of ethical calculus. Not so very long ago and on the heels of one or another specially offensive transgression, Skeptical Science had to  search our hearts: Is there a compelling reason to help Facebook with its business plan, by maintaining a presence on the platform? Now we’re asking the same question about Twitter. If you’d like to cut directly to “there’s a better way” we have a section for you right here about Mastodon, what might be termed a “post-legacy,” improved social networking service.

Recent events at Twitter are causing us to again ask familiar questions, but with a twist. For reasons we’ve previously explored we continue to maintain a presence on Facebook. Facebook goes through the motions of window dressing ruthless commercial practices for the purpose of making money. Expedient cosmetics set (admittedly loose) brackets on what’s acceptable to say on Facebook. On the other hand,  Elon Musk’s recent acquisition was launched with the explicit intent of normalizing hate speech, promoting the worst of human nature. Fertilizing and cultivating ugly human nature at its worst is how Musk’s sophomoric philosophy on “free speech” unpacks, as a practical matter.

Skeptical Science engages with folks via Twitter. What’s our responsibilty in all this, in the big and small pictures? What should we do? Leave? Stay? Prepare to leave but acknowledge the complications and trade-offs inherent in that decision? At a minimum, we should think it through. 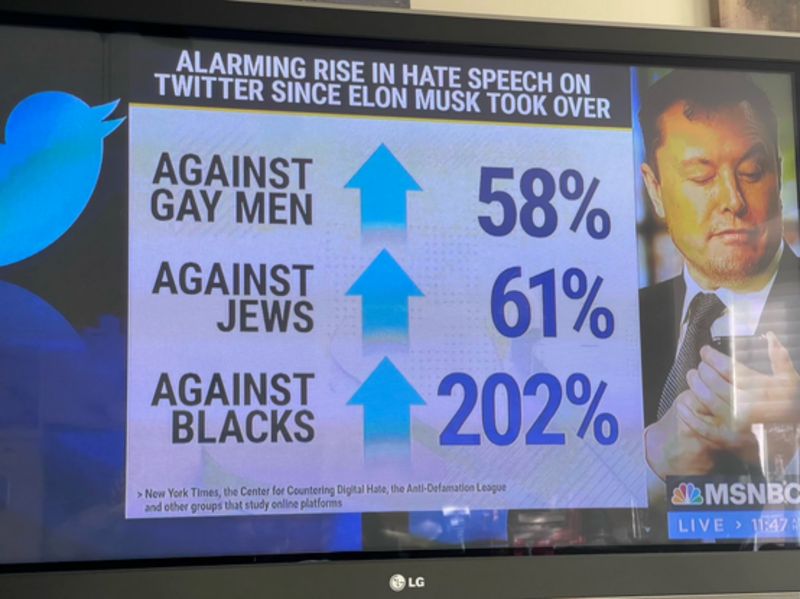 There are many reasons to be offended by developments at Twitter. A lot of Twitter employees suffered direct material harm as a result of being let go from their posts. The idea of an entire culture invested with the spirit, energy and relationships of real people being sold as chattel and then brutally reshaped by a tyrant is disturbingly anachronistic, feudal. Worst of all, folks who have made Twitter part of their daily lives are being emotionally harmed by others feeling permission granted to injure.

A healthy instinct in the face of “that’s disgusting” is to be repelled by Twitter, to back away. Not least, self-respect is closest to home: “why am I participating in this horror?” After that, “what culpability am I taking on, by participating?”  To feed Twitter with time, energy and attention without an urgent purpose is arguably a serious mistake. At minimum it’s a decision dominated by dilemma. 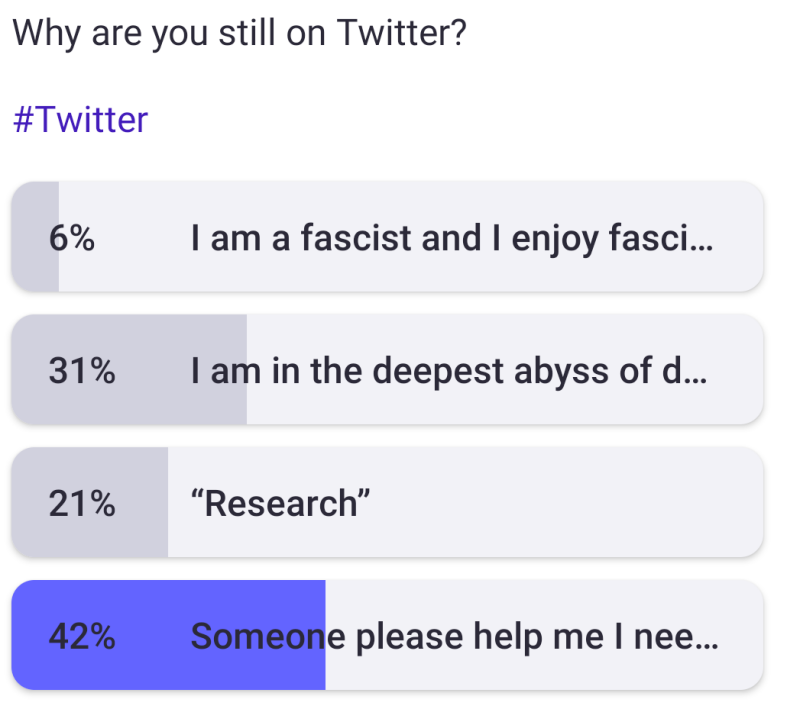 Is leaving Twitter a simple choice, and what if not? As with Facebook the very same personal investments that make the platform viable are powerfully binding, for many people. Social circles have limited portability. “Just” move to another platform isn’t necessarily easy or a practicably reasonable demand; we’re social animals, self-exile is a frightening thing— in a social circle, who’s going to jump first? In reality some proportion of users will find this very challenging. It’s safe to say that a lot of people will stick with Twitter, only with increased vulnerability to a variety of malignities. We can already see this as a matter of plain facts. Here, “a lot” likely means millions.

For Skeptical Science we’re left on the horns of a sadly familiar dilemma. The half-baked purpose of Musk’s acquisition is guaranteed to mean that our corrective services in the face of misinformation and cultivated synthetic ignorance will be more urgently necessary on Twitter. More than guaranteed: added requirement is  already delivered.  Yet staying “feeds the beast,” to some extent. We need to assess: do we cause less net harm by retreating from Twitter, or more? 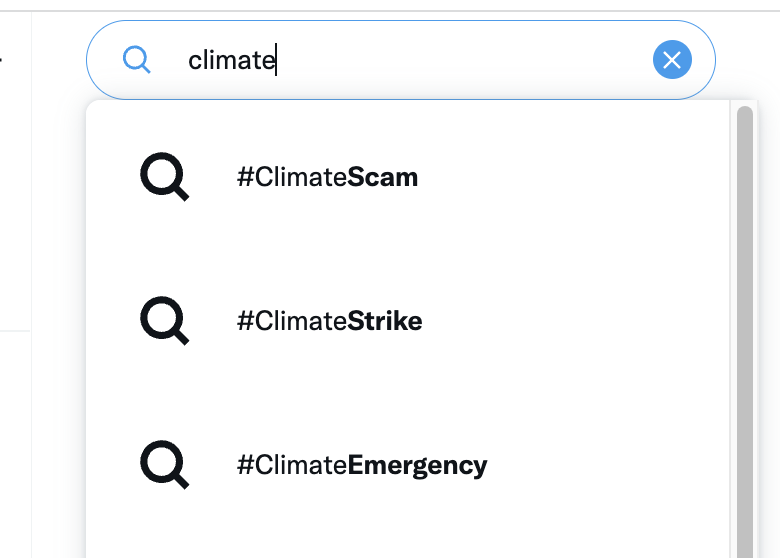 Per prior history there’s a “civilian” population at Twitter that isn’t going to evacuate in a hurry and is in need of protection, at least for some period of time. We need look no farther than Facebook for evidence of that. As with Facebook, we can hope that normal people leave Twitter, but we can’t plan on hope. Checking Facebook’s user statistics, we can see that “just leave” just doesn’t work. Hope alone doesn’t work.

Skeptical Science’s entire purpose is to combat bunk about climate science. The climate science communications community already does a lousy job of penetrating spaces where it’s most needed. Here’s “most needed” staring us in the face. How does abandoning the field in a war involving a civilian population in harm’s way provide an identifiable net benefit?

Symbolism is important, has purpose and weight, but symbolism can be outweighed. For most people– particularly those there with no particular purpose other than self-promotion etc.–  the symbolism of leaving 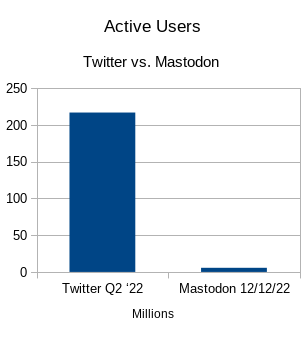 Twitter will (should?) be the most massive component of a decision. Our assessment is that for Skeptical Science, symbolism doesn’t outweigh mission. We have specific, urgent needs to fulfill on Twitter, and our symbolic departure will leave a growing, measurable amount of harm.

Thinking about all of these factors and weighing: we’re sorry to say that we’ll be pinching our noses and staying on Twitter, for the time being. Readers are welcome to suggest how we might establish a threshold of “Twitter is dead enough” below which we can conscionably fold our Twitter tent. But unfortunately, “just” leave isn’t an option right now.

So, that’s all fairly depressing. But now– good news.

“And now for something completely different” 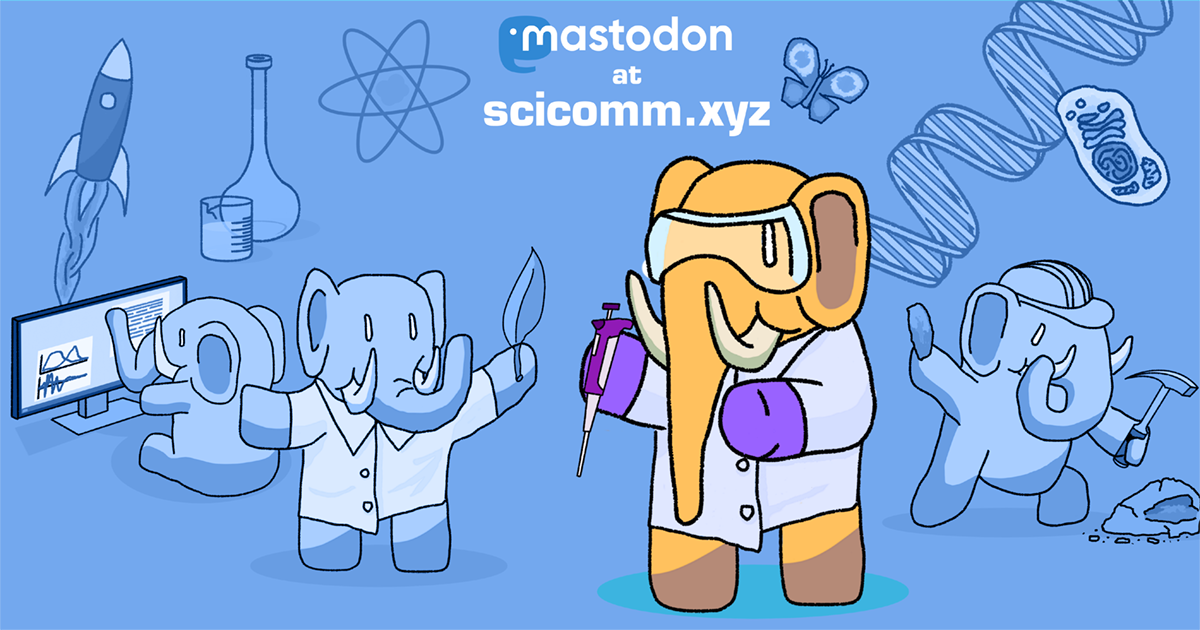 Some time ago a brilliant person created a thing called “Mastodon,” a social networking (not social media per se!) platform specifically designed to be what social networking as most of us came to know it should have been in the first place: a public service, run by the public, for the benefit and good of the public. It sounds head-smackingly obviously better than what we’re more familiar with. But Mastodon arrived long after first-movers seized the internet social space, leaving social media/networking ironically as the victim of the network effect and its lockin outcome, stuck in a state of objectives conflicted with the public good– and awful mediocrity.

The shock effect of Elon Musk’s trampling of Twitter is causing a reassessment of old habits for many Twitter users, producing an inadvertent benefit of openings for substantial improvements.

Leaving a rearguard at Twitter, Skeptical Science has joined what can fairly be called a stampede to Mastodon, where we can be found on the scicomm.xyz “instance” (server) as @SkepticalScience@scicomm.xyz. As the instance handle implies, scicomm is mostly but not all about science, and communicating science. There are many other Mastodon instances, covering an overlapping array of special-to-general interests; for us scicomm was the cultural concentration best suited. Scicomm is one of many individual “states” in the Mastodon federation, each with local culture but open borders of communications.

Overall– even for die-hard skeptics of what we accidentally came to know as social media– Mastodon and its galaxy of interconnected instances and cultures is pretty delightful, worth a look. Mentally clicking on the concept feels a bit like understanding the world wide web for the first time.

A good introduction and how-to for Mastodon is here. Our immediate advice for current social networking users: as always, don’t let neophobia block better enjoyment, more happiness. And if you can, move to a nicer neigbhorhood.